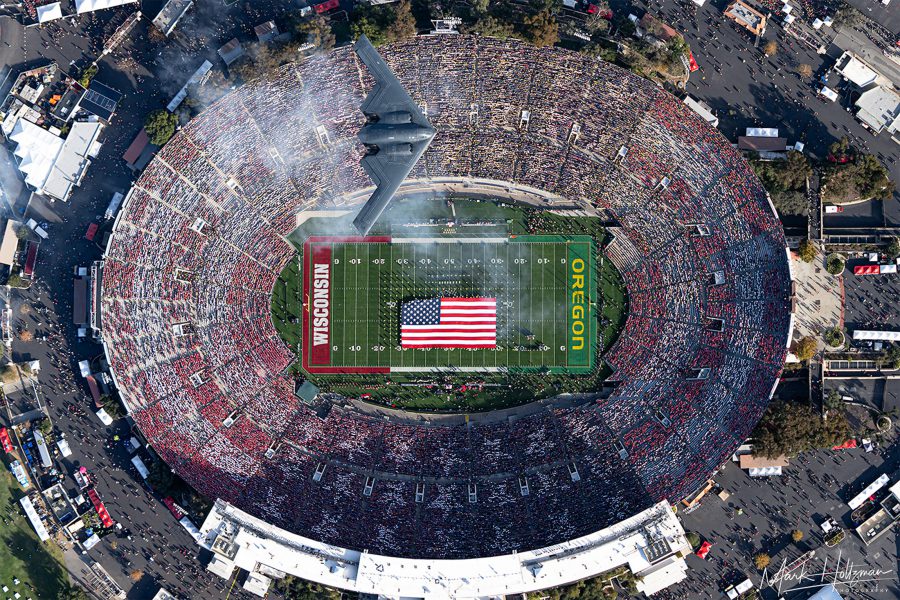 Stealth bomber pilot and flight instructor Zack Ziegler flew 1,000 feet over the crowds at the Rose Bowl Parade and football game on Jan. 1, 2020. Only a few pilots are chosen for the honor each year, which the Payton family descendant describes as a “great display of American airpower.”

“It’s definitely an honor. It’s a snapshot that reminds me I’m part of something much, much bigger than myself. It’s fascinating to share that moment with everyone in a stadium or an air show,” he said. “I’ve been blessed more than I deserve to represent the freedom and power of our country and my community.”

The Rose Bowl Parade’s 2020 theme “Power of Hope” aligned with Ziegler’s feelings about the opportunity to showcase the aircraft’s abilities.

“(A flyover) is the public’s opportunity to get a glimpse at our mission, which is great,” he said. “It reminds our citizens, their taxes are invested in an advanced defense that is capable of precise employment.”

As a member of a two-person crew, Ziegler and his co-pilot took off early that morning from Whiteman Air Force Base in Missouri. It is the only United States military base with Northrop Grumman B-2 Spirits, strategic bombers designed to move through the sky without detection.

The goal of the Rose Bowl flyover is to reach Knott’s Berry Farm in Pasadena, California, and fly over the 130-year-old parade at exactly 8:03 a.m. PST. Ziegler’s zest for problem-solving feeds off situations that present unique obstacles, like a celebration featuring blimps, helicopters and more.

“The challenges allow for great training. … If you look at the terrain, it’s difficult to plan a descent through the valley and arrive at the parade or stadium on time to the second. We stay in communication with crew members on the ground in Pasadena who provide timing updates and situational awareness of local aircraft,” he said.

Following the parade, Ziegler and his co-pilot spent time flying along the California coast and taking in the beautiful view. They needed to remain in the sky until the Rose Bowl football game later, which required the physically demanding task of mid-air refueling. It involved navigating the B-2 in an incredibly narrow proximity to a KC-10 aerial refueling tanker. Ziegler has worked both sides of the interaction as a former tanker pilot.

“It’s very difficult putting two big airplanes together, 30 feet apart without colliding. Air refueling allows us to takeoff from Missouri and deliver the B-2 and its weapons anywhere in the world,” Ziegler said.

The crew switched roles between piloting and what Ziegler called “managing the mission.” Both require an incredible amount of focus and precision. After another few hours in the air, they began to descend 15,000 feet, just in time to reach the 2020 Rose Bowl opening celebration at exactly 2:04 p.m. PST. The game featured the University of Wisconsin-Madison Badgers and the University of Oregon Ducks.

“It was just a great way to start 2020, to be able to share that moment with all those people,” Ziegler said.

“(This flyover) is a difficult one, so it took a lot of trust for (my commander) to be like, ‘OK, we want you to do it.’ I appreciate that. That makes me very proud.”

After passing over the stadium filled with more than 90,000 people, they ascended back to 40,000 feet to return to Missouri. It was Ziegler’s first time as a part of a crew for the Rose Bowl flyover, and he has never gone to the parade or game. After this year, he hopes to travel to Pasadena with his wife and their newborn son.

“It is definitely on my bucket list now. Pasadena looks beautiful,” Ziegler said.

His wife, Lily, planned to attend the parade as he passed over high above, but she gave birth to their son in mid-December. Motherhood kept her home and even distracted from the TV.

“I think it’s pretty easy to be the guy that goes and flies over the Rose Bowl. But ultimately, my wife is really the one that makes it all happen with our family,” Ziegler said. “I’m very, very thankful for her support. She’s always more excited about these things than I am, and she keeps me honest and reminds me of how lucky we are.”

Fatherhood makes Ziegler think about his youth and family. He wanted to be in aviation since the fourth grade, working hard and perfecting his application to attend the Air Force Academy at 19, immediately followed by pilot training. Ziegler has now flown for a decade. Despite long-duration missions lasting 24 hours and traveling at supersonic speeds, one of the toughest challenges in life remains living up to his grandfather’s example of service.

“People use the buzz word ‘service’ in the military, but when I think of really serving people, it’s him,” Ziegler said. “He really is the person that reminds me of service because he was day in, day out always thinking of how he could make the people around him and his community better.”

Contemplating the future of his military career, serving those around him remains Ziegler’s goal. He considers pairing it with something he loves as well as the honor of flying one of the rarest military planes in the country a bonus.

As for the Air Force’s future participation in the Rose Bowl, “We’re already on the books again for next year.”