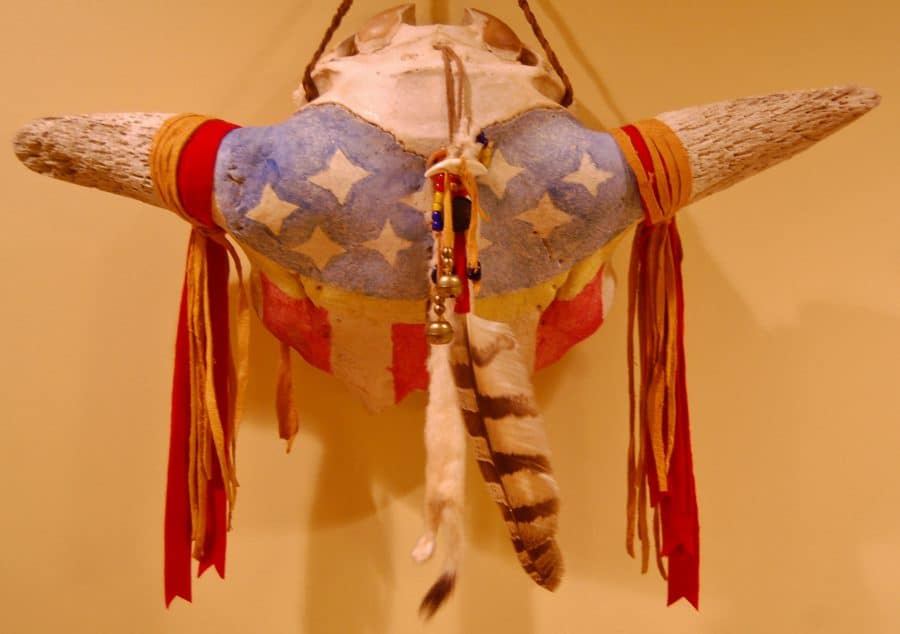 “I guess I need to stress right away: I’m not an artist,” said Tribal member and skull decorator John Pockrus. “I can’t draw, and I can’t paint.”

Exposure to Pockrus’ work increases the difficulty of agreeing with that statement. He began working with buffalo skulls over three decades ago, but his interest in bison developed much earlier.

“When I was a kid, and we would go to the zoo, I would spend more time where the buffalo display was than any place else. I don’t know why,” Pockrus said. “I didn’t care that much about the lions or the monkeys, but it’s probably a mixture of what the animal meant to the Native American people going back to prehistory times.”

He studied art history and philosophy at the College at Brockport State University of New York. He began learning about his Native American ancestry and Indigenous peoples’ cultures after he was unable to answer the theatre department’s questions about his family and traditions. They wanted to produce an interpretative performance based on Native American culture.

For 25 years afterwards, everything Pockrus read included something about Native Americans. Pockrus began his self-described “hobby” in the mid-1980s after building up the courage to try his hand at dressing skulls.

His mobile career for an automotive company spurred his obsession with and collection of Western art.

Pockrus and his wife, Carol, lived in Colorado, Montana, Utah and Kansas among other places before he retired.

“When you live out West, there’s tribal museums. There’s Indian stuff in pawn shops, for crying out loud. There’s stuff everywhere,” he said.

He made friends with Western artists and Native Americans in tune with the spiritual aspects of their culture wherever work took him in the region. He also read about the history and substance of designs and visited art museums searching for more information. The Prairie Edge & Sioux Trading Post on the Rosebud Indian Reservation near Rapid City, South Dakota, provided the chance for a hands-on experience.

During his next opportunity to travel there, he brought a piece in development as well as a list of questions and techniques he wanted to learn. Pockrus spent the afternoon with Charles Fast Horse, Sr., discussing how to braid horsehair and tie feathers among other things.

“I read every book that I could find about buffalo, and about the history and the near demise of (them),” Pockrus said. Over the years, his infatuation grew into respect for what they represent to Native Americans — not only medicinally and spiritually, but also practically.

“Buffalo hides before canvas were the coverings for teepees and wickiups, and spoons were made from horns, and weapons were made from jaw bones, you know, like clubs, and the skulls were used in ceremonies,” he said.

After obtaining an abundance of knowledge, he felt ample enough to try to make a beautiful piece in earnest. The first few dressings he made while learning did not meet his expectations.

“I wished I had those skulls back so that I could do it knowing what I know now instead of wasting a perfectly good skull on a feeble attempt at trying to recreate something,” he said.

However, failure remains an integral part of the learning process. Pockrus’ attempts only came with the availability of a difficult item to find.

In the past, he even took advantage of the opportunity to get off the highway and purchase one he saw sitting on the seat of a farmer’s tractor.

“They’re not domesticated, rambling animals,” Pockrus said, reminding himself of a time he tried to photograph a bison herd on a ranch in western Missouri.

“I foolishly walk into the woods thinking, ‘Well, if I got chased, I could just dodge in and out of the trees,’” he said. “Well, that wasn’t the case. And I did get chased, and I found out that a bison could run through the woods a lot faster than I could and dodge all the trees and the shrubs and everything. And I ended up having to scramble over a fence just to keep from getting gored.”

Skulls with historically significant backgrounds and connections to the earth add meaning to the projects created with them. About 10 years ago, he traded a man for a partial one found near Great Falls, Montana.

“The guy that I got it from said, ‘This was pulled out of the banks of the Marias River,’” Pockrus said. “Now, for that to be the case … that bison had to have passed away near that river and been buried in the silt probably in the days of Sitting Bull. So, this had to be very special.”

“Even something as simple as a coyote tooth,” he said. “Well, the coyote is the gentle trickster. He does foolish things that when you watch him, you think he’s being silly, but when in fact, what he’s doing is teaching you a lesson.”

He places particular importance on representing adaptability, perceiving it as the source of Indigenous peoples’ endurance and survival.

“I keep telling folks, ‘When the last light bulb dies in North America, the Indians will still be dancing,’” he said.

Pockrus decorated the skull he obtained in Montana to honor his older brother Bill’s military service. Inspired by his decorated veteran status, Pockrus considered how to represent various aspects of Bill’s experience in the Vietnam War.

“In some circumstances, the owl is revered as the swift and silent hunter,” he said. “My brother happened to have been a point man, and his job was to scout out ahead and try to stay out of sight. And ferret out any machine gun nests or the enemy.”

The layout resembles a guidon, a double-pointed pennant traditionally carried on the end of a flagpole to designate an armed forces regiment. Red, white and blue in a semi-brocade pattern represent the United States flag.

Other items dressing the piece include hawk bells that represent a connection to those in the Spirit World and U.S. Indian Service tunic buttons worn by Native Americans, all attached to a trade shell disk forming the Sacred Circle of the People.

He worries about what he calls the “anxiety of influence,” drawing inspiration from the past while achieving originality. To date, he has dressed around 15 skulls. Individual art dealers and collectors around the world commissioned many of them, and art galleries displayed a few.

“It had to be as authentic as I could make it in every possible way because these weren’t just going to be adorning someone’s den. … They were going to be part of a collection of important stuff,” Pockrus said.

He gave two away: one to his bother in 2011 and another to his friend, also a decorated Vietnam veteran.

“The whole idea of the giveaway is you take the thing that you value most and give it away because that’s where the power comes from,” he said.

Pockrus’ daughter, Neva, is about the same age he was when he started working with bison skulls and gaining his vast knowledge base. He wants to pass it on to her along with the history of their Potawatomi heritage as descendants of the Wilmette and Pratt families.

“I picture myself as being part of a movement or an effort to hold on to the culture,” he said. “To keep it out there.”