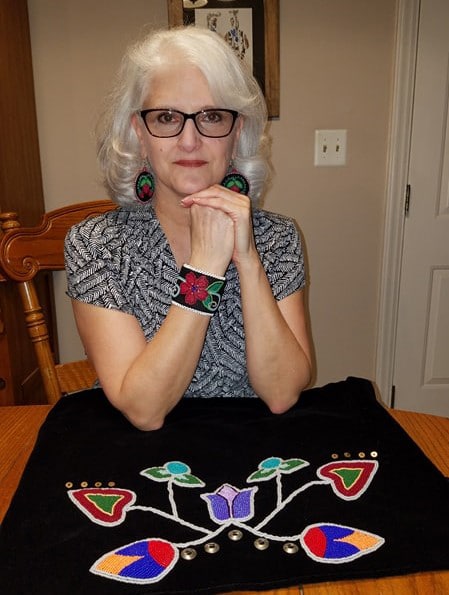 “I don’t remember not doing any of it — it’s just been such a part of my life for so long,” she said.

Until about 15 years ago, her art primarily documented and celebrated her Citizen Potawatomi Nation family and heritage, for events like ceremonies and powwows.

“We grew up with our heritage. Joseph Napoleon Bourassa was my great-great-grandpa, and it’s just always been a part of our upbringing,” she said. “My grandma and my mom and my aunt started me dancing when I was 4 years old. I’m 60 now, so it’s been a long time.”

When she was young, her mother and “Aunt Wilma” taught her beading, peyote stitch, loomwork, sewing and making traditional clothing. Loomwork isn’t her favorite beading method, so she leaves that to her brother Michael Hancock and her cousin, Laura Hewuse, who is more like a sister to her.

“She’s actually my mom’s first cousin, but we always called her my Aunt Wilma,” Kinder explained. “She was quite the craftsperson — beadwork and ribbonwork and shawlmaking. She took me under her wing.”

She started with handmade ribbonwork, which she did for decades, she told the Hownikan during a recent telephone interview. In the last 15 years, she has used a sewing machine and Wonder-Under, a type of adhesive material that fuses fabric pieces together, to create ribbonwork.

Around that time, she also was asked to teach, “so I began teaching classes. That’s when people started ordering from me, and I thought, ‘OK, this is good!’” 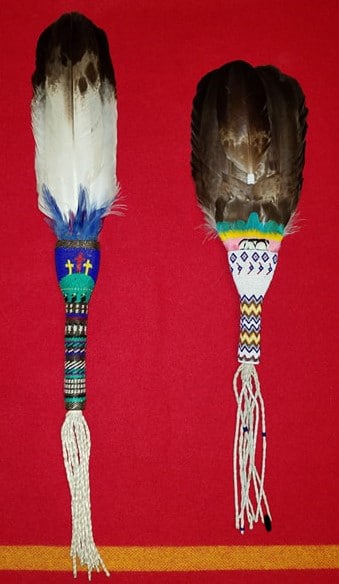 A highlight for her was beading a Prairie Band Potawatomi Nation elder’s ceremonial eagle fan.

“Those are the kinds of things that are quite an honor for me,” she said.

Most of Kinder’s clients learn about her by word-of-mouth, Facebook groups and connections with other Potawatomi tribes.

“I have a lot of people in the Great Lakes and Canada who order my work,” she said. “And making connections and friends at the Gathering of Nations and Family Reunion Festival. Recently, Prairie Band Casino & Resort contacted me to purchase some of my earrings for their gift shop. So now they are carrying my work, and I am grateful.

“I’m happy to make things for people that they are happy with and that they’re going to use properly in the arena or in ceremonies, but I get the most satisfaction out of making our traditional woodland patterns, our florals — because it is keeping ancestry alive,” she said.

“And I get the most satisfaction out of the fact that I’m doing it by hand — I am old-school,” she said, then laughed. “Old-school.

“I feel like every time I do something, I am making mom, my aunt and my grandma and all those ladies that came before, I’m making them happy. I hope I’m making them proud,” she added. “My grandma used to tell me that, my mom tells me that, my Aunt Wilma told me that. They pretty much still inspire me, and I do a lot of it for them — keep them alive.

“If I ever have a creative block, my elder friend Lila Tabobondung in Canada tells me, ‘Listen to your ancestors.’ So, I talk to God, talk to my ancestors, then I sit back and listen.” 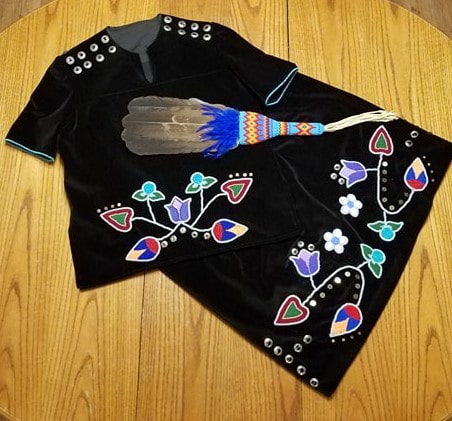 “I made them years ago, back before the museum flooded,” Kinder said. “I assumed they were destroyed. Both — a complete male outfit and complete female outfit — used to be on display. I don’t know where they are now. I haven’t been able to make it down to check it out.”

When Kinder saw photos of them, she shared the story of their creation with the Hownikan in her own words: 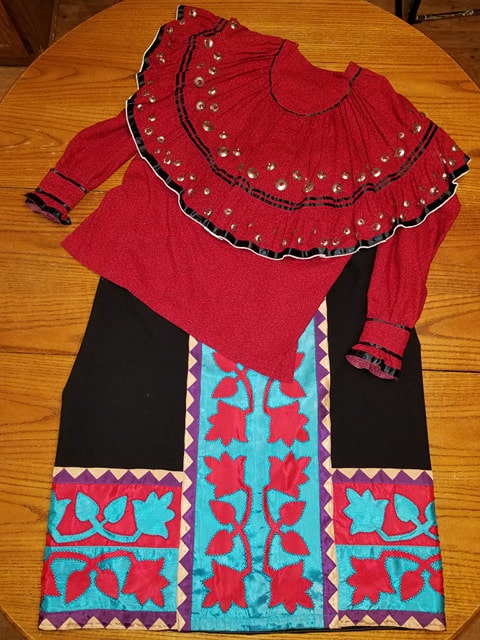 I made everything but the fan.

The ribbonwork pattern I replicated from an old piece in the archives of the Milwaukee Museum. The original piece was so old that most of the silk used to make the strip was gone; all that was left was the decorative stitching around the design. I thought replicating an old design made at some point by one of our relatives would be good for this display. It is my way of honoring the initial maker; keeping that pattern alive. The Potawatomi sleeve bag was prominent with Potawatomi ladies when I was young. That’s why I wanted to include it in this display. We don’t see many of them anymore.

The beads I purchased for the necklaces are as close as I could find to the multiple strands of beads our ladies wore. It took a lot of time stringing those up, and I was happy with how they turned out.

The moccasins I made and put ribbonwork on the flaps.

My cousin, Wilma Foth McAuley (great-granddaughter of Joseph N. Bourassa, and grew up calling her “Aunt Wilma”) and my mom were my first teachers. My mom, Elizabeth Hancock, used to enjoy loom beading. She taught me looming, and I did do several pieces, but it was never my favorite method of beading.

Anyway, when Aunt Wilma found out I was making this dress for our Cultural Heritage Center, she was so excited. She had this silver brooch for a very long time. She wore it in the arena. She gave me that broach to put on this sachkin (blouse) for the Cultural Center. I was touched and honored by her gesture. It is a treasure.

The silver washer broaches on our clothing became identifiable with Nishnabe after contact with French traders.

If you look at old photos of our men relatives, you will frequently see some kind of sash. Some are beaded, some fingerwoven, some ribbonwork.

This pattern is an old one my Aunt Wilma gave me. I used it to honor her. I also used the same pattern on the apron.

I love our woodland clothing and style.