Paying for college one ’ship at a time

Filling out applications is one of Paula Kelly-Frey’s specialties, especially for scholarships, and she created a business out of getting people organized to do it, too. Kelly-Frey is a Citizen Potawatomi Nation Tribal member and Bourassa family descendant. Earlier this year, the United States Patent and Trademark Office approved her request to trademark the name of her company, ’Ships Ahoy.

“I was really surprised, but it wasn’t as hard as I thought it was going to be. They have pages and pages and pages of information on the government website,” she said. “So you go, and they suggest you get a lawyer. I did talk to a lawyer, but I ended up filing on my own.”

Kelly-Frey established a set of scholarship application protocols a few years ago when her daughter Alyssa was a junior in high school. Over time, those techniques turned into sellable three-ring binders with everything needed to strategize paying for college. 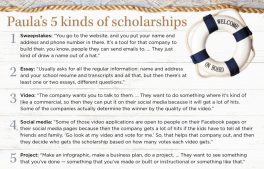 She says organization and repetition are the keys to their success while submitting between 70 and 80 applications a year.

“Very few people actually know where to start looking for scholarships and find the ones that are perfect for you,” she said. “We thought we could help out, and this notebook is an organizational tool that should help them out.”

In the beginning, Kelly-Frey’s husband worked longer hours at the sandwich shop they own, allowing her time to help their daughter.

After making 15 or 20 notebooks for free, she realized people are willing to pay for the valuable tool. Soon enough, strangers and acquaintances wanted her help and copies of her binder, too. Now she sells two or three a month, mostly in Kansas, but word is spreading. She enjoys helping her customers on an individual basis. A couple of Kansas high schools surprised her when they asked her to speak at their college preparation nights.

“I was deathly afraid that the parents were going to ask me questions that I had no clue about and would look stupid, but I was pleasantly surprised that I could answer almost everything that they asked,” she said. “That was when I decided, ‘Oh, well, maybe I do know what I’m talking about; maybe this will work for everyone.’”

’Ships Ahoy sells three versions of its merchandise: basic, original and premium ’Ship Kits. The original is a three-ring binder filled with organizational plastic pockets for paperwork, instructions for each item, large manila mailing envelopes, thank-you cards and a general timeline and checklist for college preparedness.

It also comes with a list of over 1,600 scholarships for any United States college regardless of a student’s major. She consistently updates the list and regularly searches for additions.

The “basic” version does not come with the list. The “premium” binder includes additional scholarships specific to a customer’s school, interests and major. The title page of the binder explains the importance of parents, mentors and family helping youths in their quest to finance their education.

“The students have to get good grades, and they have to do some extracurriculars or have a job or volunteer so that they look good to the scholarship committees,” she said. “It can’t be something that you just hand to the kid and say, ‘Here you go: Here are 1,600 scholarships. I’ve given you this notebook, now go get some money.’”

One of her favorite sayings is, “The pen is mightier than the sword.” It is unintentionally the inspiration for ’Ships Ahoy. Her product instructs the consumer to track their accomplishments, how they are spending their time, and their progress, all with her favorite paper good — sticky notes.

“You’re going to need that information at some point in time,” she said. “Sometimes, it’s not what you do that gets you the scholarship. It’s how you write or how you organize things or how you keep notes that’s going to help you.”

Part of volunteering, extracurricular activities, schoolwork and employment is being able to recount those accomplishments later.

“It doesn’t do you any good to stay modest and say, ‘Well, I didn’t really help out that much,’” she said. “You helped, and that’s more than a lot of other people did. So apply for as many as you can, and promote yourself. Don’t be apologetic about it.”

She also learned to Google everything with the word “scholarship” behind it. Companies are offering educational funding for a variety of skills and experiences including speaking Klingon, the fictional language from Star Trek. One day, she searched “Wizard of Oz scholarship.” It is her daughter’s favorite movie. Instead, she discovered Oz Moving & Storage Company.

“Even though you might not find what you think you’re going to find — she obviously was hoping that there was some scholarship that she could maybe quote the entire movie backward and get a scholarship — but that’s not what we found,” Kelly-Frey said. “She did find this other one, and she applied for it every year.”

In May, Alyssa completed her junior year at Kansas State University in Manhattan, Kansas, paying for classes with the benefit of her essay writing abilities and her mom’s efforts. According to the Institute for College Access & Success, the national average for student loan debt was more than $30,000 for bachelor’s degree recipients in 2015. She is debt free.

Find out more about ’Ships Ahoy at scholarshipsahoy.net or facebook.com/scholarshipsAhoy.