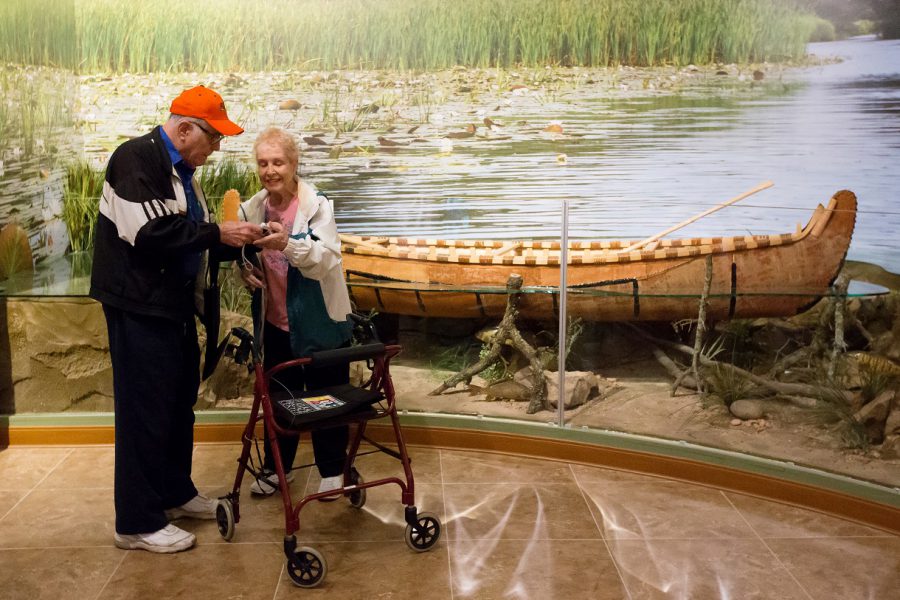 “It really does serve as a buffer against problems, which can be mental health problems, just life stressors, because life is stressful for everybody,” said Stumblingbear-Riddle, who is also Citizen Potawatomi Nation Behavioral Health director, Native Connections clinical director and outreach program coordinator. “When we have a strong cultural identity, it serves as a protective factor to help us cope and get through the things that we need to.”

As hundreds of guests visited Citizen Potawatomi Nation’s Cultural Heritage Center Jan. 20 during its grand reopening, the Hownikan met many of them, discussing the importance of Native American culture, history, identity and generational resilience.

Stumblingbear-Riddle said the unique plurality of Native Americans — having both tribal identity and American citizenship — means many inherently internalize esteem-depleting, conflicting and uninformed societal stereotypes. As a result, mental health can be difficult to maintain, especially in children.

“There are a lot of stereotypes and myths out there that we have to constantly fight, and we know that, a lot of times, that’s linked to mental health problems,” Stumblingbear-Riddle said. “We know that culture is prevention — I believe that 100 percent. We do know that people who have a stronger cultural identity do better in life.”

A member of the Kiowa Tribe herself, she encouraged people to explore, read and take cultural and language classes, not just with Citizen Potawatomi Nation, but with North America’s more than 500 tribes.

“I think that’s a really good exploration for people to engage in because you learn a lot about yourself, and then that leads to you figuring out what your purpose is and how you want to live your life,” Stumblingbear-Riddle said. “There are so many opportunities to check things out and find what you’re interested in. We’re all learning; we can all learn together and really keep our culture alive and thriving so our little ones can know it and benefit from it too.”

Here, five Cultural Heritage Center visitors reflect on the renewed resilience and sense of purpose that comes with identity: 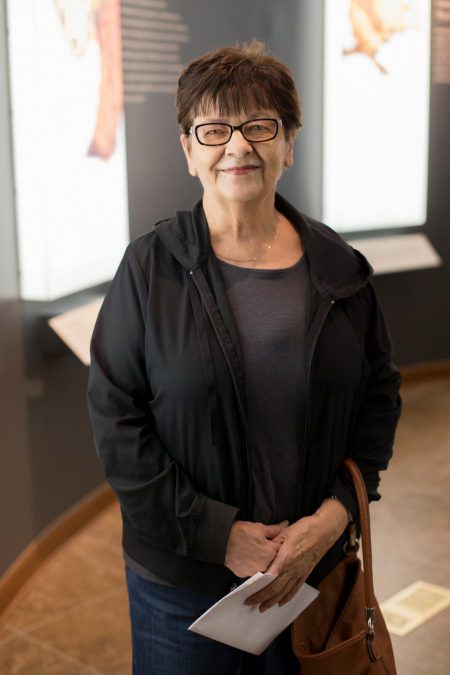 Hownikan: How important has discovering your heritage been for you?

Yort: I think we all need to know where we came from. I think everyone always thinks of Europe and all those places, and it’s been difficult to find anything about the Native Americans and our Tribe specifically. So this is just wonderful. I’ve been so impressed with the Cultural Heritage Center.

I think for the non-Indian community, it’s important for them to see the contributions of the Native Americans. A lot of people don’t realize that, I don’t think.

Yort: Yes. It happened today. I hadn’t really thought about — I saw the exhibit in the back of the heritage center on the allotments — that our people were given American citizenship. I thought, “Are Native Americans not citizens?” I mean, was it not automatic? I had never thought about that.

Hownikan: What reason most motivates you to share CPN family history and culture with your grandchildren? 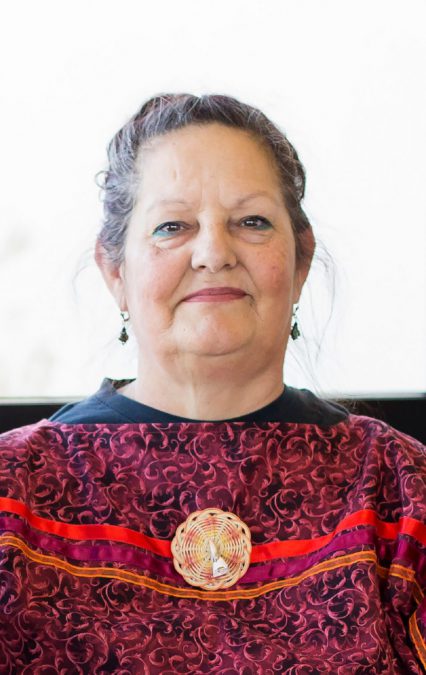 Hownikan: How important is it for you to represent your culture and heritage?

Wamego: Today, I came in my dress because I’m an elder, one, and I was taught that, as an elder, you need to play your part, and your part is a woman, a kwe; that’s k-w-e. …

Not only that, when I’m dressed in my dress, I bring my ancestors with me; they can identify me because my shadow is cast, and it’s cast as a woman. I was taught to carry myself proudly.

Hownikan: Citizen Potawatomi tradition and tribal history are both very important to you.

Wamego: Yes; absolutely. I identify as a Native American. Always have; always will. … When people ask, ‘What nationality are you?’ Or if there’s a box to check for ‘What are you — Caucasian, Hispanic, American, etc.,’ if ‘Native American’ isn’t an option, then I always say ‘other.’ …

I don’t have anything against anyone; I am half-white. But socially and in the real world out there, I’m Native American — Anishinabe.

Hownikan: Have you checked out the reopened Cultural Heritage Center?

Wamego: I was the first one through the door. I came in from Skiatook, Oklahoma, last night … and came here early this morning. I’m very proud of what they’ve done.

Hownikan: What impressed you most?

Wamego: Every five years, there’s a re-enactment of the Trail of Courage (Trail of Death). Five years ago, three of my sisters and my nephew, we all went up to Rochester, Indiana, and did it all the way down to Kansas. It’s the most humbling experience you will ever have in your life. …

My dad (William Wamego Sr.) was in the group that started the re-enactment back in 1988. Did you see the wheel and the carriage display in the Cultural Heritage Center? That’s the one that they brought Chief Menominee in on the trail. My dad rode in the cart as Chief Menominee in the first re-enactment. … Our sisters and brothers have kept the legacy alive. 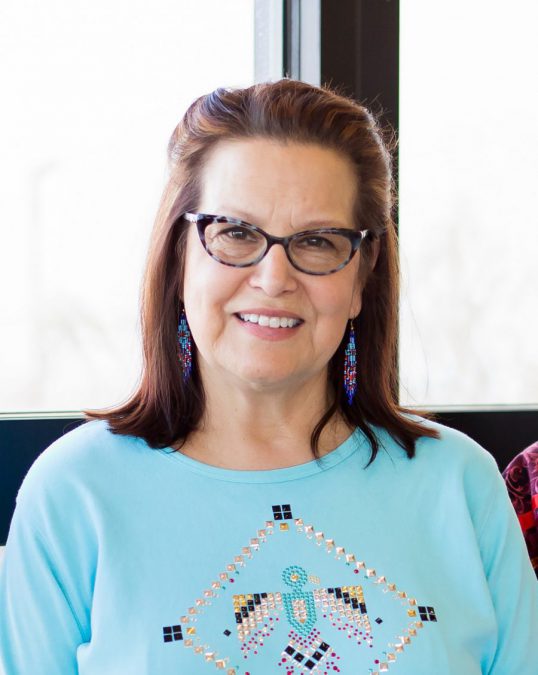 Hownikan: Where did you come in from?

Wamego-Vanveen: My sister (Catheryn Wamego) lives in Skiatook, but I came in from Tahlequah, Oklahoma.

Hownikan: You’ve been through the museum. I can see the experience had a powerful emotional impact on you. What section, specifically, most moved you and why?

Wamego-Vanveen: Most of this we knew, but I teared up at the display showing the allotments. We saw our great-grandfather’s name. And then I showed it to my grandson (Luke Tero), and that made me tear up even more, even though we know about it — we have a copy of the allotment. But actually seeing it, I was totally unprepared. And then everything else made me cry.

Hownikan: Has connecting with your CPN history and culture given you a stronger sense of purpose — of identity?

Wamego-Vanveen: Living in my part of the state, and then Tulsa where we grew up, everyone always said “potted meat.” Nobody else was Potawatomi. So, it’s awesome to come to a place where there are a lot of other people with your same heritage and your same identity.

Our grandfather told us — this is what’s so funny, too, because a (CHC) exhibit reminded me of this. Our great-grandfather (Joseph Wamego) probably never saw Michigan, because he was born in Kansas in 1858. And then our grandfather (Harry Womego) probably never did, either, but he told us we were from the Great Lakes and the big forest — our ancestral homeland. That really touched me today, because I realized that, while others tried to take everything away from us as a people, our origin story was something he could still pass on to us. We are proud descendants of the Bruno and Vieux families, too, and that will never be taken from us.

Oh, then we also have a picture of our dad on the wall on the Veterans Wall of Honor (in the CHC Long Room) — and of our brother and sister. To take my grandson in there — it just means so much to all of us.

Hownikan: It took several years for the Cultural Heritage Center to rebuild.

Wamego-Vanveen: The wait is worth it. Everything in it is beautiful. It’s a blessing to Shawnee to have this museum now. I hope the City of Shawnee appreciates this beautiful museum that the Tribe has created at no cost to them. Like, in Tahlequah, the Cherokees have a wonderful museum, and the community supports that, and uses that as part of their tourism trade. 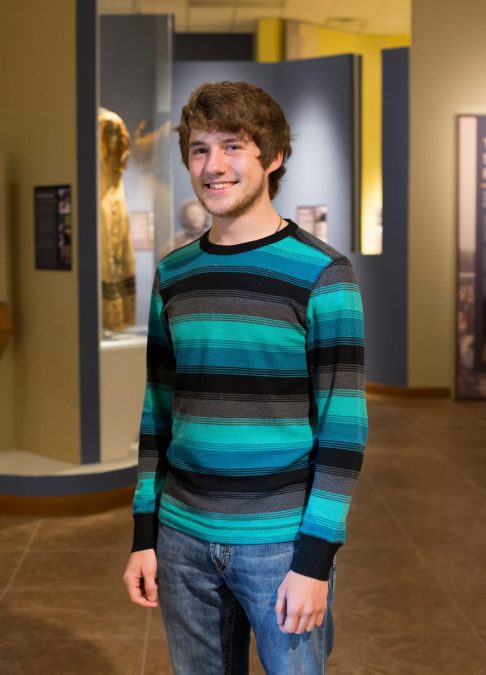 Hownikan: What inspired your visit to the museum today?

Steward: I began working for the Tribe in January of last year, so this is pretty much my one-year anniversary. I mainly work in the community garden program down the street.

I started school (as a junior studying environmental sustainability at the University of Oklahoma) a couple of weeks ago, so this is my first time to see
the center in several days. It’s changed so much since I’ve last seen it, so even seeing it with Dakota today, I’m like, “Wow, this is amazing — this wasn’t here last week!” The thought and planning and work on the CHC are transformative — our history is real.

Steward: I’m 21, and it was recent — I wasn’t even enrolled as a tribal member until high school. My sophomore drama teacher is a Citizen Potawatomi tribal member, and she told me to join. In 2015, I was approached with the opportunity to participate in the Potawatomi Leadership Program and went through that.

Hownikan: Has connecting with the Tribal community impacted the trajectory of your life or studies?

Steward: I’m motivated to get out of Oklahoma, go northeast and look there, talk more with elders — and other tribes even — and talk to them about
their experiences.

I feel like it should be everyone’s hobby to go out and understand what has happened, because, here in Oklahoma, people don’t want to talk about these issues. They live in the “Land of the Red People,” but there’s so much ignorance about our identity, how we got here, our role (and) our land. 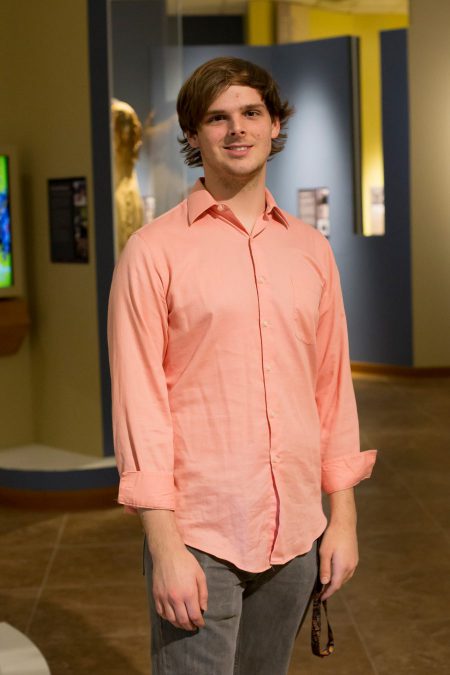 Hownikan: As a non-Native, what’s your biggest takeaway from today’s visit to CPN’s Cultural Heritage Center?

It’s made me more aware of how other people view things. Everyone has a very filtered view of history, because our education system doesn’t teach it.

Hownikan: You mentioned you will come back to the museum; that you want to spend a lot more time here. What, specifically, most interests you?

Mullendore: All of it.