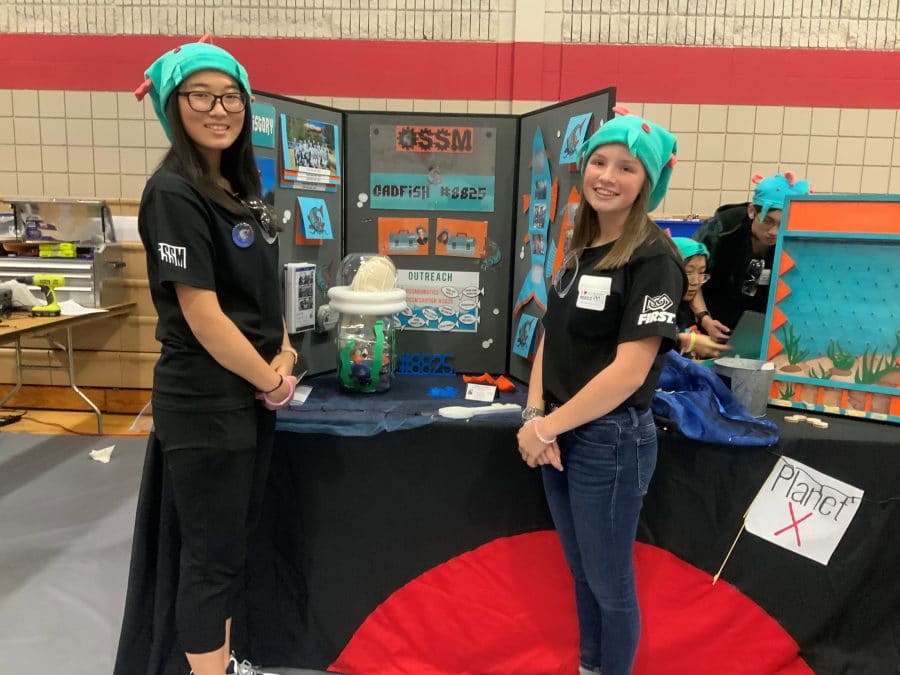 Although only a junior in high school at the Oklahoma School of Science and Mathematics, Pettifer family descendant Kyla Risenhoover’s main career goal reaches outside of earth’s atmosphere. She wants to become an astronaut. Studying at OSSM, the state’s premier high school for top students in STEM fields, is her first step.

Juniors and seniors comprise the student body that comes from across the state, and a rigorous application process means that the school only accepts half of the students who apply. Prior to transferring, Risenhoover attended high school at the Hydro-Eakly Public Schools, a small district in western Oklahoma. Her older brother attended OSSM as well.

Risenhoover enjoyed the academic challenges, extracurricular activities, and chances for internships and mentorships during her first semester. It took some time to adjust to moving into the dorms in Oklahoma City, but now she knows she made the right decision.

“I love it. I’m constantly with all my friends, and the support system there is just absolutely amazing,” Risenhoover said. “You know everybody else is going through the same academic rigor that you’re going through.”

She started her junior year with physics, pre-calculus, and what turned into one of her favorite classes, zoology, which included dissection labs. It surprised Risenhoover how much she enjoyed the course, and she appreciated the academic experience unavailable in many rural school districts.

“Growing up, my dad would take me hunting and fishing, so I was used to harvesting animals for meat. And to me, that didn’t really bother me very much,” she said. “But it also kind of opened me up to understanding how other people are, because not everybody is okay with just cutting open an animal. And so that was a very valuable experience to me.”

Studying physics expanded Risenhoover’s mind to courses of study and job possibilities in the future.

“I really struggled in that class, but I know that it was really worth it. And it was interesting to me because I’d never taken physics before,” she said. “It kind of made me question some of my career (choices). Like, do I want to go aerospace engineering? Or would I rather go a more medical route?”

Risenhoover also participates in the FIRST Tech Challenge for robotics. A senior class member selected her as one of the junior captains. While the competitions focus on constructing robots that complete a set of tasks with speed and accuracy greater than the competitors, Risenhoover also learned valuable life lessons.

“I think it’s definitely helped me with my leadership skills as well as if something goes wrong, you have to problem-solve. … Especially in my position as team captain, I try to keep a positive attitude because if we have a negative attitude, then the team’s just not as happy, and things start going wrong more. But if you keep everyone with good morals, then it just keeps going smooth,” she said.

Risenhoover also became a coxswain on the rowing team, a member of the Kind Society and one of two junior delegates on the first OSSM Student Foundation Board, serving as a voice of the student body to the OSSM board of trustees.

Space, influences and the future

Exposure to STEM studies started in Risenhoover’s childhood, which included a trip to the Sonny Carter Training Facility in Houston and the opportunity to stand on the deck of the pool at the Neutral Buoyancy Laboratory. Astronauts train and prepare for flight and work on the International Space Station in the 6.2 million gallon pool that simulates the absence of gravity in outer space.

“That’s honestly the top memory of my entire life because I knew my mom’s boss, who’d been working there for 40 plus years, I think, had never had the opportunity to go on the floor of the NBL,” she said. “And here I am, 12-year-old me, getting to go on the floor, and it was just an absolutely amazing experience.”

One of Risenhoover’s most admired scientists is Christa McAuliffe, a teacher and astronaut killed during the Space Shuttle Challenger Disaster in 1986.

“Just the passion that she had for her students — I want to be like that someday. I want to make a difference,” Risenhoover said. “Also, we’ve had over 30 African American male and female astronauts. We have had over 20 Hispanic-Latino astronauts, both male, female, and we’ve only had one tribally-registered male astronaut. So, I would really like to be the first female Native American astronaut in space, let alone on Mars. To me, that’s like my dream.”

Risenhoover believes the future of humanity expands past earth’s atmosphere and onto other planets, which includes new branches of study in botany, physics and energy. Another one of her idols, Gus Grissom, was the second American to fly in space and a member of the Apollo 1 team who died in a pre-launch test flight in 1967.

He said, “If we die, we want people to accept it. We’re in a risky business, and we hope that if anything happens to us, it will not delay the program. The conquest of space is worth the risk of life.”

Risenhoover agrees. She realizes the frontier of exploration and uncharted territory come with new challenges and hazards. She hopes her time at OSSM leads her on a path to live up to Grissom’s words.

“They understand the magnitude of what they’re doing, going to space,” she said. “That’s what they want to do with their life, and so they want us to keep persevering and going through with the experiments and everything that we need to keep doing.”

For more about OSSM, visit ossm.edu. Find opportunities with the CPN Department of Education including scholarships, leadership programs and advising at cpn.news/education.