CPN Director of Nursing named one of Oklahoma’s Great 100 Nurses: Amber Curtis honored for her lifelong dedication to caring for others 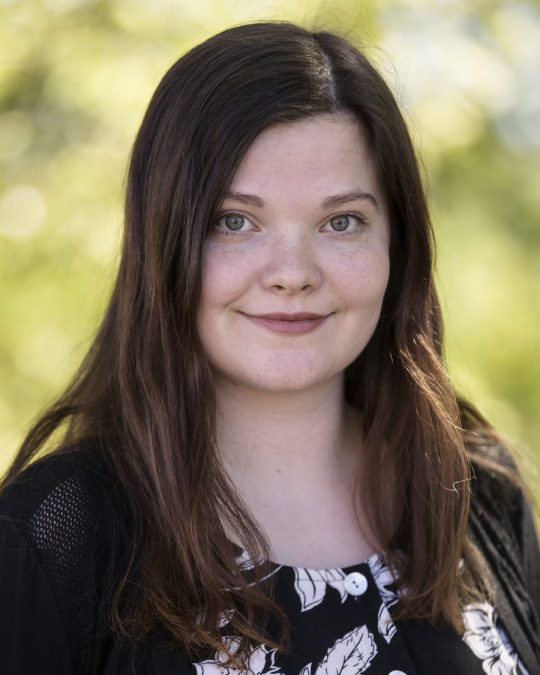 As a child welfare specialist, Bethany Bruno makes tough decisions every day about the lives and futures of children in Oklahoma foster care. She focuses specifically on permanency planning for children at the Department of Human Services Pontotoc County Office in Ada.

She has a Bachelor of Arts from Southeastern Oklahoma State University in Durant, where she double majored in psychology and sociology. Bruno’s passion for studying how people behave and function in groups led to her work towards a master’s degree in clinical mental health counseling, as well as her desire to conduct research that hits close to home.

“I am studying research about Native American resilience and humor styles, particularly in the Citizen Potawatomi Nation population,” she said.

Bruno uses the Scale of Protective Factors, or SPF, which measures people’s ability to deal with trauma. The SPF-24 model uses 24 items to assess subjects’ resilience. Bruno’s research scaled it back to 12 to make a rather lengthy survey more manageable.

The scale allows Bruno to measure an individual’s resiliency factor regardless of the intensity or kind of trauma experienced.

A large part of the SPF measures goal efficacy, or the ability to make a goal and see it through. It also measures behavior associated with planning and prioritizing, social support networks and social skills.

Bruno chose to focus on two sets of humor styles: adaptive and maladaptive.

Within adaptive humor, there are two subsets.

An adaptive humor style is indicative of an ability to accept your surroundings and adjust to stressors.

There are also aggressive and self-defeating types of maladaptive humor, which do not show a correlation with resilience.

“Aggressive (humor includes) putting other people down to make yourself or the group laugh,” she said. “Self-defeating (is) putting yourself down, and that can certainly isolate people.”

Certain types of humor are more common throughout any particular culture and are largely dependent on whether it is individualistic or collectivistic. Members of collectivistic cultures heavily consider the group ahead of themselves, and Native Americans mostly fall into this category.

“That can go back to actually being more self-enhancing and more affiliative,” she said. “You’re wanting to uplift the group rather than yourself.”

Bruno collected a majority of her research during the 2016 Citizen Potawatomi Nation Family Reunion Festival in Shawnee, Oklahoma. All of the data was volunteered and self-reported by participants who filled out fairly lengthy surveys. After completing them, Bruno revealed their humor styles, which she said was what most people were interested in.

“What was interesting though is they scored very low in social support,” Bruno said. “My best-educated guess would be because as we have started as a tribe and as a people to come back to our roots and to identify with who we are as Native people, there are still aspects missing from forced assimilation and traumas that we’ve experienced in our families throughout generations.” 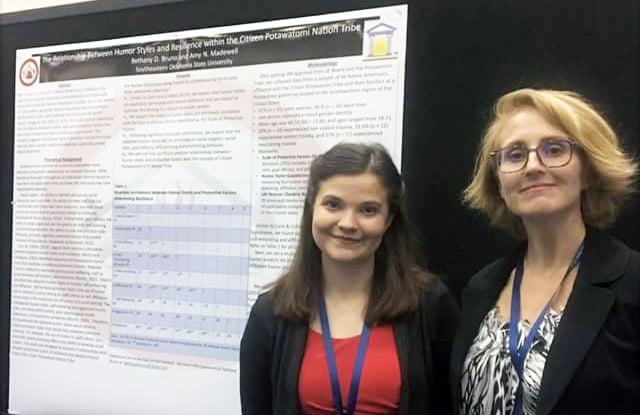 Bethany Bruno and her professor Amy Madewell attend the May Association for Psychological Science Annual Convention in Boston, where Bruno presented her research to a national audience. Photo provided

She presented her findings to industry professionals during the May Association for Psychological Science Annual Convention, including in front of attendees from Harvard and Yale universities.

“They haven’t seen any Potawatomi research,” Bruno said. “Native American research in itself is very rare, especially in psychology. That is something that a lot of researchers, particularly in Oklahoma, are trying to increase.

“(It) was just really well-received — they wanted to know more.”

Bruno said the data is useful in practice, including counseling.

“If this research is available to (a patient’s) counselor, then they can identify their humor style and see if that will actually help them and their resiliency” following a traumatic event, she said.

As a member of the Bruno Potawatomi family, she has experienced this kind of humor firsthand.

“My Native American family members are very humorous,” she said. “It just depends on who it is, but some have a very dry sense of humor, and some are just very different.”

She also collected data at this year’s Family Reunion Festival and hopes to continue collecting data until she obtains enough to “prove over years how resilient the Potawatomi population is, because I know they are. But I have to prove it still.”