“Kind of bridges that gap for people that are almost here but not quite and just need a little bit of help with maybe getting their debt load reduced, getting their credit scores up to a point that the bank is not going to turn them away and just get them prepared for the homeownership experience, period,” said homeownership manager Sherry Byers.

In 2019, she and Housing Department Director Scott George began developing the program. The first family with a lease with option to purchase signed their contract in early 2021. CPN member Ashley Garcia and her husband Seth said they appreciate the guidance they received from the housing department and the Citizen Potawatomi Community Development Corporation.

“I highly suggest it,” Ashley said. “It honestly hasn’t been hard at all. Just turn in your documents do what you need to kind of thing.”

George and Byers hope to build up a waiting list and help people prepare for homeownership before they move.

The lease with option to purchase program allows participants to move into a new home built by the Tribe under a three-year lease. During that time, they take part in credit counseling services from the CPCDC and First National Bank & Trust, Co. and work to improve their credit scores. At the end of those three years, they have the option to buy the home with their lease payments helping reduce the purchase price.

“It’s going to give them three years to make their credit a little better. Maybe they have a student loan. Maybe they have something else out there that they’re trying to take care of. So there is also a debt-to-income ratio portion of that that we’re looking at also,” George said.

Funded by the Department of Housing and Urban Development, applicants must meet the HUD low income limit — 80 percent of the state non-metropolitan median family level — determined by the household’s size. The program is open to tribal citizens within the Nation’s jurisdiction, with CPN members given preference.

The lease payments generally match those of a mortgage, with taxes and insurance paid from them as well. If prepared to purchase within the timeframe, the lessee may also qualify for a $20,000 buy-down grant toward the mortgage.

“We’re going to be doing constant inspections, constant budget counseling, financial counseling, homebuyer education counseling,” Byers said. “There’s just going to be a series of things going on that entire three years. And we’re not trying to get into all their business, but we want to make sure that they know and are prepared so when that three years is up, they are able and should be successful at going through the homebuyer process and maintaining that home during their 30-year mortgage.”

In a few short months, the Garcias have learned from their sessions with the CPCDC and discussions with FNB’s loan officer. They see purchasing the home before the end of the lease as a distinct possibility.

“They walk you through the entire process. So they make it really easy if you don’t know what you’re doing because we sure didn’t,” Seth said.

Built along King’s Road on Tribal property in Pottawatomie County, the five single-family homes range from 1,200 to 1,600 square feet on a one-acre lot. Each features an open floor concept and costs between $130,000 and $160,000. The property comes with the purchase of the house. The homes also include new electric appliances, including a washer, dryer, dishwasher and refrigerator and large pantries in the kitchen.

“The kitchen, living room, dining room is all an open area with bedrooms coming off of one side or the other. Two of the homes that were built with a loft to try to add a little extra to it and give a little extra feeling of not only openness but a place where you can either watch TV, separate from everybody else,” George said.

The housing department and developers also focused on reaching net-zero energy while remaining within the parameters and cost for those who qualify. Despite the difficulties of reaching those specifications in rural Oklahoma, the houses use less energy than many more expensive homes. It significantly decreases utility bills and allows homeowners to put more money toward maintenance and their mortgage.

In addition to their daughter, the Garcias recently welcomed a son, Fisher, and the energy efficiency and new appliances were selling points. They chose one of the homes with a loft, which Ashely said gives them space to grow as a family.

“It feels very homey and stuff. And obviously, we’re going to be here for a while and just a place to grow, and for (Ryley) to grow up and our baby to grow up too. So that’s exciting,” the DeLonais family descendant said.

The Garcias signed their paperwork and moved in time to celebrate Ryley’s sixth birthday in their new house — a significant milestone since they typically travel for family parties.

“I think it’s exciting, especially because we just got married in March of last year. … This is our first home together. I mean, we lived together in our rent house before that, but just having something that’s going to be ours and that we’ve worked so hard for is a huge accomplishment,” Ashley said.

To learn more about CPN housing programs, visit cpn.news/housing. Watch a video presentation about the lease with option to purchase program at cpn.news/leasevid. Read about the Housing and Urban Development income limits at cpn.news/HUDlimits. Call the CPN Housing Department at 405-273-2833. 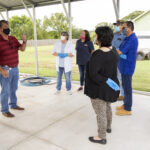 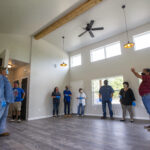