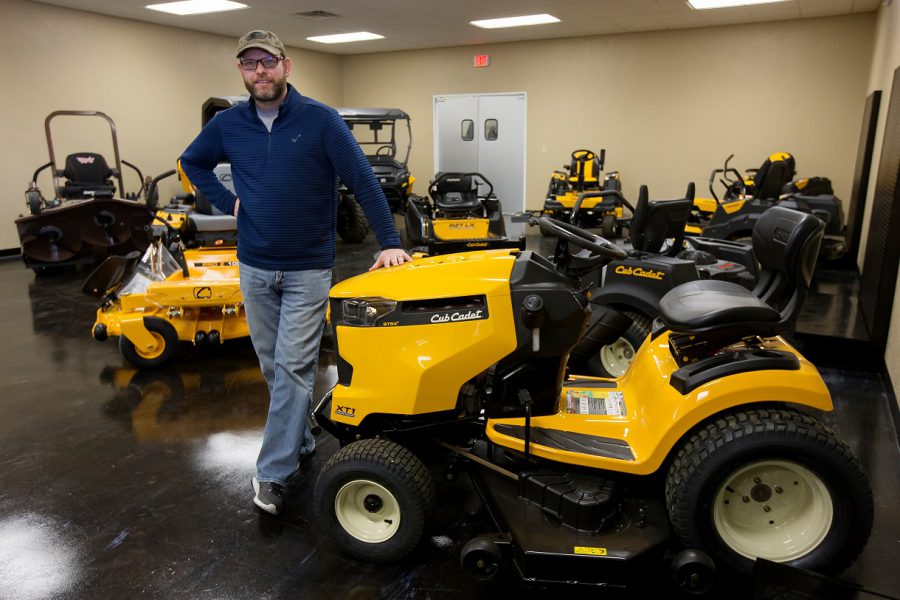 When owner Nathan Beauchamp looked to expand his dealership from its single location, Ada Outdoors, Shawnee was a natural choice.

“It’s an amazing market. You’ve got your farmers and ranchers,” he said. “There’s more people rurally than there are in town.”

Beauchamp served as a CPN Police Department officer before acquiring the lawncare company in 2013. He and BDC Gun Room owner Jack Barrett modeled the concept to combine landscaping machinery and gun sales after the success of Ada Outdoors.

“You don’t think of the two going together until you get a guy looking at a lawnmower and then thinks he also may need a gun while he’s here or the other way around,” he said. “Customers that like guns and firearms and outdoor equipment also are mowing their own yards.”

The new branch offers Cub Cadet, Grasshopper and Husqvarna brands as well as parts and services. Previously, Duval Equipment sold Cub Cadet gear but discontinued after new owners purchased the shop. Beauchamp seized the opportunity, and Shawnee Outdoors is the brand’s only dealer in town.

“My Cub Cadet reps and Grasshopper reps were really pushing me to open a second location,” he said. “Then when this area became available, they were pushing me to be up here.”

The companies’ high-end inventory impressed Beauchamp throughout the years, and he markets products he feels have proven their worth and endurance. The store carries the latest product lines featuring upgrades that are sportier and faster.

“They’ve added Bluetooth, you know, power steering to a lot of models. Stuff that you wouldn’t think would be on a lawnmower,” he said, then laughed. “We’re excited.”

An assortment of handheld instruments are also available — tillers, log splitters, chippers, shredders, pressure washers and push mowers — for those who don’t need a riding lawnmower.

Beauchamp said customer service is one of the most important aspects of his business and has high expectations for Shawnee Outdoors.

“We’ll be the only ones where you can pick up the phone and actually talk to someone about what problem you’re having,” he said. “Someone who knows what they’re talking about and is certified in the product that they’re selling.”

When fully staffed, the store employs two sales associates and a mechanic. The goal is to return smaller restorations and enhancements, such as replacements of in-stock belts, blades and tires, within hours, not days.

“We’re going to be competitive with the big city, with the prices,” he said. “They’re able to buy truckloads of equipment, and we’ll be doing the same.”

Beauchamp and Barrett took advantage of the chance to boost each other’s sales and catalogs, and create a unique shop.

“If it wasn’t for the Tribe, then we obviously wouldn’t be here now,” Beauchamp said. “We’re extremely grateful for it.”

The Tribe collects lease payments and sales tax from Shawnee Outdoors’ business at a regular rate of 8.995 percent. The lease agreement is under contract for five years with an option to renew.