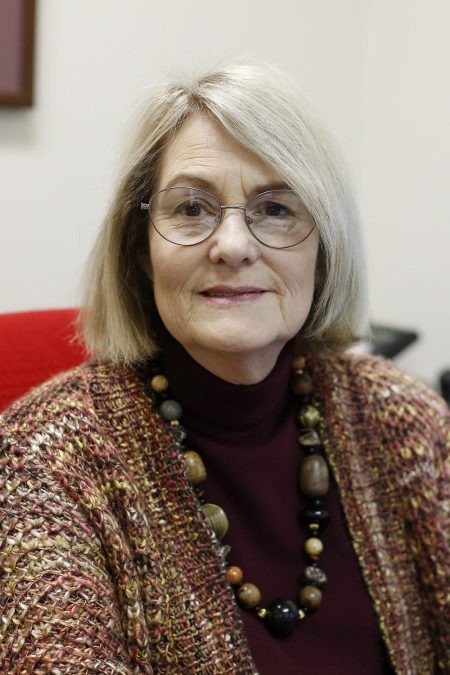 The “triangle” describes the circumstances that typically surround an act of fraud: opportunity, rationalization and need.

“I’m hoping to take the opportunity portion out of the triangle, or some people call it a three-legged stool,” said Citizen Potawatomi Nation Internal Auditor Becky Cragin.

Cragin began this newly created position in October. She is a certified public accountant and was the Assistant Director of Accounting at CPN since 2007.

“Most organizations our size have an internal audit department,” Cragin said. “I think the Tribal Chairman (John “Rocky” Barrett) and Vice-Chairman (Linda Capps) decided it was time that we had one.”

With over 2,200 employees and over 15 enterprises, an internal auditor was becoming a necessity to mitigate exposure and increase efficiency.

“The Association of Certified Fraud Examiners, they do research every year, and they’ve said that most companies will lose up to 5 percent of their revenues to fraud,” Cragin said.

She plans to reduce that possibility with a “two-pronged approach” by evaluating liabilities throughout the Tribe and looking at individual programs and enterprises.

“I’ve done a risk assessment plan for each of the different budget entities and have different criteria that I’ve rated each one on and weights for each of those criteria,” she said. “Those that rate high for a higher risk; I’ll be looking at those programs separately.”

After an evaluation, the findings could lead to new procedures and methods for dealing with money in some departments and job description updates. A separation of duties is often important to stopping fraudulent activity.

In accordance with these guidelines, Cragin left the accounting team. Internal auditing at CPN is now a department of its own. “Those two functions are supposed to be separate. So as internal auditor, I may be auditing accounting so I shouldn’t be auditing my own work,” she said.

Cragin frequently works with human resources, as payroll is one of the most frequently targeted areas for fraud, Forbes reported in October. CPN also has data-mining software that allows her to keep track of budgets and assess risks in a timelier manner.

However, first things are first, and that means education. She has focused on training department heads on the basics of fraud prevention. In December, Cragin began holding seminars for those running a wide variety of enterprises and government branches across the Tribe.

Cragin wrote the curriculum for the sessions, which includes how to report suspicious activity using the Tribe’s new fraud hotline.

“A third party is now hosting that hotline,” she said. “So someone could call in, and (Capps) wanted me to make sure everyone… knew how to do that.”

Outside of training, some of the directors have requested her skills on their own, specifically to assess their department’s vulnerabilities and examine their procedures.

Cragin greatly considers the future of the Tribe in respect to her new position, hoping something like fraud will not become a hindrance.

“I guess that’s my vision,” she said. “I would like to reduce those risks so that they’re minimal.”