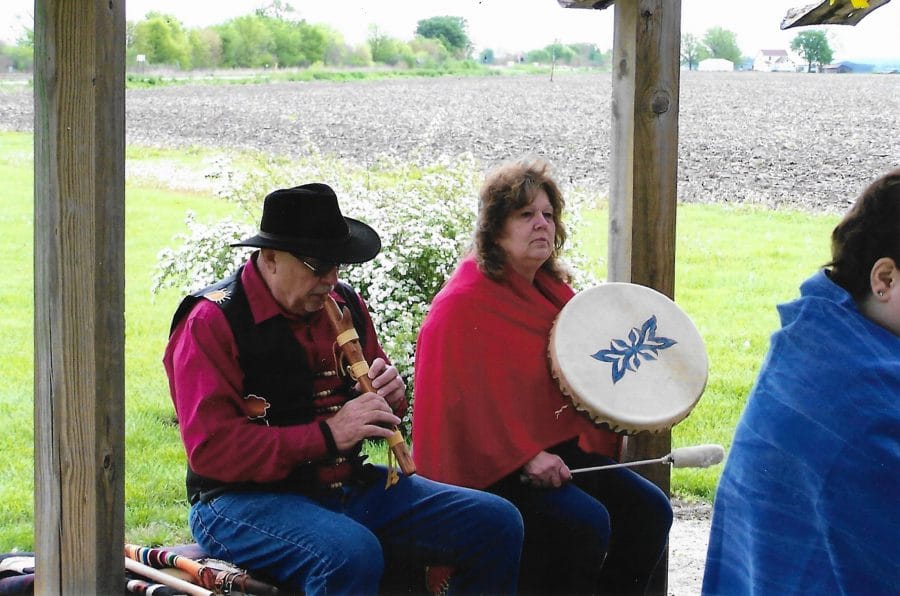 Martin served two tours in the Vietnam War. Today, he volunteers at the hospital to give back to fellow service members and veterans. The musicians there inspired Martin to learn how to play the Native American flute.

He began researching various styles and techniques, and after an invitation, joined the flute circle at the local VA Hospital. His time with the performers continues to instill a deep, sincere appreciation for reciprocity.

“They’ve shared a little with me, and I share a little with them,” Martin said. He honors the lessons passed down from the group’s participants by leading a monthly flute class at the Citizen Potawatomi Nation’s Community Center in Rossville, Kansas.

Learning the instrument “takes time and focus. And just like anything else, you need to practice to improve your skills,” he said.

“The hard part is getting the students to practice,” Martin said. “And when I say students, most are at least 50 years old, and one of my students is 82.”

Although picking up an instrument for the first time later in life can prove difficult, Martin has found his students do not let age influence their ability.

“Like a lot of other things, people don’t realize what it is until you try it,” he said.

“They see how they are making progress, and that is certainly well worth it for them and for me,” he explained.

For those interested in learning the Native American flute, Martin suggests searching online for a variety of resources, tutorials and retailers selling the instrument.

He often attends Potawatomi events to play the flute or drum.

“It can be really emotional when we do naming ceremonies,” Martin said. “People really respond to it … it really touches them.”

Martin accepted a position with the Nation to maintain Tribal properties in Kansas five years ago. In the small town of Rossville, CPN operates an elder housing program, providing 10 affordable duplexes serving CPN members as well as a 10,000-square-feet community center.

“It’s my job to make sure that No. 1, all the residents are safe, and they’re living in an environment where their heating and cooling, appliances and all of that is up to standard,” Martin explained.

He also strives to anticipate each of the 21 resident’s needs, ensuring they can live their lives to the fullest.

“The most rewarding part of the job is when I know everybody is in their little unit and everything is like it’s supposed to be,” he said. “Everyone is safe and sound and comfortable — that’s where I get rewarded.”

The community center serves as a place for CPN members to enjoy fellowship and hold cultural classes as well as discuss family connections and Tribal history.

“There are those that take an interest in the culture, and we have some Tribal archives that are very extensive and of a high quality,” Martin explained.

One of Martin’s responsibilities is to prepare the center for events, including the monthly District 2 potluck and meeting organized by CPN Legislator Jon Boursaw where Martin holds the flute circle.

In addition to the lessons and district meeting, attendees bring food to enjoy afterward, which Martin attests is always delicious and plentiful.

Outside of volunteering, his work with CPN, and the monthly flute circle, Martin also enjoys songwriting and playing the piano. “But there’s only so much time in a day; I can’t do it all,” he said.

During a phone interview with the Hownikan, he spoke a few lines from a song he recently wrote that pokes fun at those who ride the coattails of their family’s successes.

“I’m an old cowboy from Paxico.
I go everywhere in a Silverado.
Grandpa’s land has been good to me.
I don’t pay taxes, and I got it for free.”

He pulls lyrical inspiration from various businesses, industries and people from northeast Kansas, considering himself an “armchair scientist.” Martin studies the behavior of those around him to learn more about the intricacies of modern life.

As a piece of wisdom from his observations, Martin encourages fellow Tribal members, young and old, to find their passions.

“Don’t be afraid to go out into the world and strive — set your goals high, and don’t give up,” Martin said.