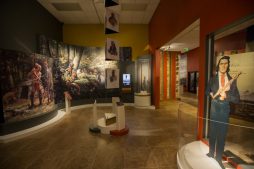 The fur trade’s decline and colonial competition increased turmoil across Indian Country. Through the 18th to early 19th century, discord among Native Americans and the federal government continued to grow. Section five of the Cultural Heritage Center focuses on this influential time in North American history.

Each Native group had their own survival tactics. Some wanted to find the best European ally, while others tried to abandon colonialism entirely.

“Focused on what was most advantageous for their communities, Native groups created fluid relationships with the colonial powers of North America – Spain, France and Great Britain.” said Blake Norton, curator. “Colonial alliances were leveraged and pitted against one another.”

However, geography contributed most to alliances. The French’s leverage in much of the inner Great Lakes region enticed the English who also wanted control, especially around French Detroit.

“Generational change started to happen. The old guard began fading, but many Natives at this time wanted to hold onto their power,” Norton said.

This section’s goal is to highlight warfare’s evolution and the deep, spiritual connection associated with this tumultuous era. Decisions and procedures enacted during this time helped form federal Indian policies, which continue to impact every Native American.

Discord between European allies and their Native enemies during Pontiac’s Rebellion and the War of 1812 created long-term ramifications for Native Americans.

“Each of these periods had an underlying spiritual movement that motivated many of its native warriors.

These movements were rooted in the defense of traditional native lifestyles and to combat foreign acculturation,” Norton said.

The desire for truth and guidance allowed word to travel fast, he said. During the French and Indian and Pontiac’s Wars, many Potawatomi sought direction and began following the Delaware prophet Neolin. His spiritual lessons encouraged followers to reject assimilation and instead revive traditional Native practices and customs.

“Neolin encouraged communities to throw off the shackles of Anglo acculturation and to fight assimilation, doing away with European trade goods and highlighted how colonial relationships were disenfranchising Native groups,” Norton said.

However, through these sacred connections, more Native leaders and prophets began to spread an anti-colonial message.

It was always the same message, “Do away with these foreign ways, and turn your back on these people. They are evil,” he said. “Help fight this oppression — keep the bond with your people.”

Ottawa chief Pontiac fought in the French and Indian War alongside many Potawatomi.

“Pontiac took the messages of Neolin and put them into action,” he said. “Pontiac quickly and easily developed a confederation of Native individuals to join the battle against Great Britain and its policies.”

Potawatomi revere the Delaware people and recognize them as grandfathers and elders. This aided in the dispersal of Neolin’s ideologies into the Great Lakes region, he said.

“The French and Indian War was a battle for control over the lucrative fur trade in the Great Lakes and ultimately colonial expansion,” he said.

Every Potawatomi and Native in the area did not fall under one flag, he said. Leaders made decisions based upon what was best for their immediate group, village or clan.

“If confrontations were brought to the forefront of a group, if certain individuals belonging to that regional band wanted to take a stand, it’s likely to say that everybody else from the group stepped up and assisted.

“All Potawatomi were not devoted to the French, but the majority upheld this alliance due to their long and intertwined pasts,” Norton said. “French traders were the first Europeans to make contact with the Potawatomi, and many had married into the Tribe by this period.” 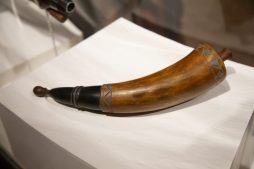 “There is archaeological evidence that shows specific regional villages heavily embraced a return to a more traditional way of life and began sole production of traditional weaponry using bone, stone and wood,” he said.

Potawatomi held a reputation for being strong, fierce warriors. Common weapons and tools featured in the exhibit provide insight into this tumultuous era and weaponry advancement.

“Many of these items were utilitarian objects,” Norton said while pointing to the tomahawk displayed. Gear like the tomahawk served “as a tool, weapon and also a pipe. Everybody smoked during that time, men, women and children of both European and Native ancestry,” he continued. “The tomahawk pipe was a highly prized commodity that was traded and utilized widely.”

“Once firearms became the standard, you had to have a way to arm them,” he said. “However, pistols like the one in this section were seen more as war trophies. It’s not to say that people didn’t use them. It just wouldn’t have been preferred over a long arm.”

“In close proximity to the enemy, hand-to-hand combat, with your neck-knife and club, was preferred over a firearm,” he said. “War clubs and/or tomahawks could cause devastating damage.”

This Koman (knife) represents one of the Potawatomi warriors’ key weapons.

“They always had a knife with them,” Norton said, pointing to the neck knife on display. “They served as a Swiss army knife, if you will. They were used for everything.”

CPN employee Neil Southern refabricated a vintage blade for the display. Southern works as a security guard at the FireLake Casino and makes personalized weapons for his company Pork Chop Knives in his free time.

“It was Ferlin’s grandfather’s knife,” Southern said. “It was just laid up, rusted and looking terrible, so I put it on a wire wheel. Then I drew out what I wanted, ground it down and put a false edge on it. I did it in a way it still looked antique, then I fixed an antler on it I had around for the handle.”

Potawatomi did not take their presence in wartime lightly, Norton said. Many wore their best pieces of clothing and adorned their heads with easily recognizable headpieces.

“Roaches were primarily worn for protection,” he said. “Many have porcupine quills that deterred people from grabbing a warriors head — they’d just get a handful of quills.”

CPN tribal member and employee Randy Schlachtun created the two roaches within this section. Inspired by other Tribal members’ regalia, he decided to teach himself through trial and error.

After his first failed attempt, Schlachtun had a vision.

Tools from this time in history, like this tomahawk, often have multiple uses. It serves as a weapon and a tobacco pipe.

“It wasn’t a dream. I was awake, but I could just see these hands tying the string a certain way that would make it to where the deer tail fur wouldn’t spiral up,” Schlachtun said. “The next morning, I tried that technique, and it worked well.” He’s been using the method ever since.

Once he completes the deer fur base, he then adds porcupine quills. Schlachtun said he is honored to have some of his hand-created items within the CHC.

“I’m glad that the little roach is in with the knife,” Schlachtun said. “We call it old style because they’re really little. They’re not like the ones the dancerswear nowadays.

“I wanted to make a little one because in all the pictures of old Nishnabe people, that’s what I saw,” he said.

Creating roaches takes time and is expensive, “but it’s worth it when you’re making it for a Tribal member who might not have access to that or may feel uncomfortable making their own,” Schlachtun said.

A war club carved in a raptor’s claw image hangs at the end of the display next to the war roach.

“War clubs were traditionally made from tree root. The natural shape of the hard, dense wood worked perfectly as a clubbing tool,” Norton said.

“The root’s natural shape would be carved and worked into different designs and motifs,” he said. “Some of them, like the one featured, lent to the design of a claw while others were smoothed, polished and adorned with metal spikes and rivets that caused more damage.”

When going into battle, Potawatomi painted their bodies in vibrant, rich blue or red hues. This helped instill fear into colonial enemies.

“Ochre, which is a mixture of clay and naturally occurring minerals, were ground and made into a paste,” Norton said. “War medicines were also put into the paint, so it’s not just for ornamentation. It was also for protection and intimidation with each pigment holding a specific meaning.”

For Potawatomi men and women warriors, battle training included equal emphasis on spiritual growth as it did battle-readiness.

“To be a warrior, it was encouraged for one to commune with the spirits for guidance and understanding,” he said. “To help interpret what was experienced, elders and more seasoned veterans were sought out.

Images of prominent Potawatomi headmen captured during live treaty negotiations connect the section’s ceiling and floor near the end of section five. Artists attended these negotiations and sought out significant Native leaders to paint or draw, Norton said.

“They are beautiful works of art that display key historic figures,” he said. “They were not only powerful people in the Tribe, but also powerful to perceived enemies.”

Near the end of the exhibit sits an interactive which “highlights the basic articles that would have been worn by a Potawatomi warrior,” Norton said. “Traditionally, the gear worn would have been minimal. As trade goods and weapons were acquired, more was put on.” 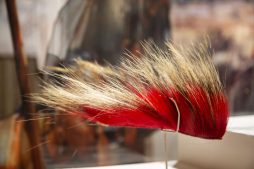 When coming to the CHC, visitors design their own warrior by choosing weapons and clothing.

“We wanted to detail and really show how (each piece) would have been utilized. It’s fun to see the weapons and artifacts on display put into action,” he said.

“This interactive gives the user the option to go ‘old school’ using only traditional pieces, ‘new school’ with trade items, or a combination of both,” Norton said.

Native groups, including the Potawatomi, fought to preserve what they could to keep their culture, language and its people alive. Unfortunately, shortly following this time in history, federal policy and tribal relations with the government ushered changes impacting every Native American then, now and forever.