Gathering of Nations brings Potawatomi together

In 2009, Citizen Potawatomi Nation’s Department of Environmental Protection began conducting research through surface-water monitoring across Tribal land. The department’s monthly quality tests on Squirrel Creek and its unnamed tributary uncovered alarming trends. Due to their findings, the department applied for a nonpoint source pollution grant, or 319 Grant, under the Clean Water Act to fund remediation efforts.

“This project serves multiple purposes,” said Assistant Environmental Director Shawn Howard. “It’s going to serve to help us manage our floodwaters better. It’s going to help us improve the water quality of Squirrel Creek, and hopefully, we will incorporate aesthetic features of the wetland and then make it kind of like a nature conservancy.”

Squirrel Creek is the Nation’s largest source of surface water, however, “one of the main influences in the stream is Tecumseh’s wastewater treatment plant,” said CPN Environmental Coordinator Micah Isaacs. 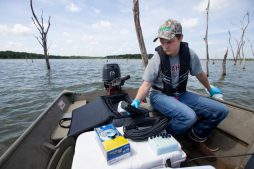 “There’ve been several fish kills there also, which is due to all of those things combined,” Isaacs said.

Excess pollutants, what is currently in Squirrel Creek, cause oxygen levels in the water to be too low for fish and other organisms to live. As a result, large numbers of water life dies, which is known as a fish kill.

Initially, the team considered using pollution reduction ponds, however, due to the location where Squirrel Creek and the North Canadian River meet just north of CPN’s Eagle Aviary, the team plans to develop small, meandering streams to divert and purify the water.

Another consistent issue for the Nation, when it rains, much of CPN’s land becomes inundated with water due to its location on a flood plain. To combat this, the department is also constructing a high-flow bypass.

“A high-flow bypass is used as a surface water conveyance during rainfall events to help move water out of the tributary in a more efficient manner,” Isaacs said.

Under normal conditions, or when there is no runoff from rain, a dam guides surface water into the constructed wetland area.

“A rainfall event will cause water levels to rise and flow over the weir into the high flow bypass, allowing the water to move out faster,” he said.

The department is also looking to utilize noninvasive plants that are culturally significant to the Nation to aid in removing toxins along the meandering streams. These plants will act to remove harmful impurities before Squirrel Creek meets the North Canadian River north of the aviary.

Continued monitoring will measure the environmental impact of the project, and the department believes it could set
a precedent.

“We’re really excited about this project, and we hope that, when it’s finished, it serves its purpose and that the Tribe can be proud,” Howard said.