Mortons open cannabis dispensary to give back 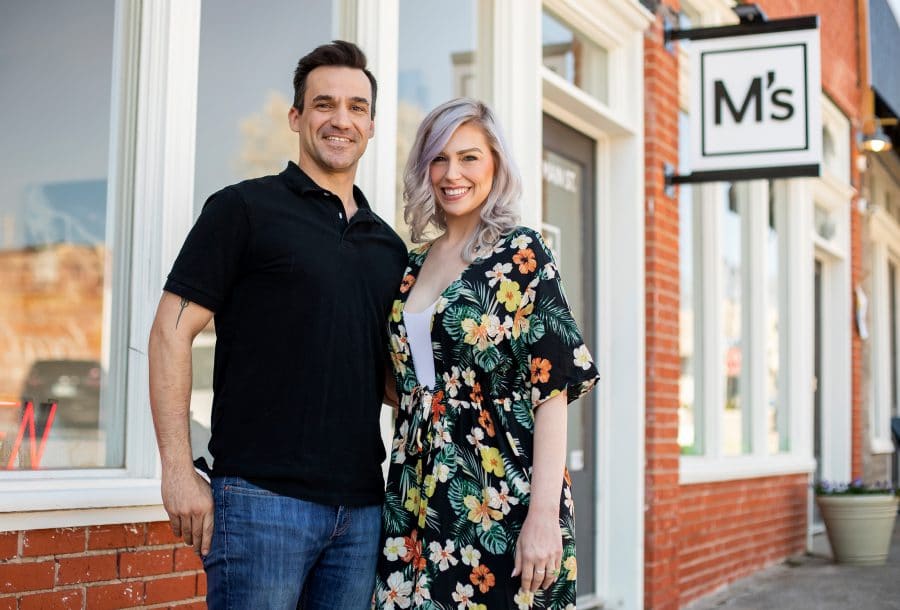 Big Bud, Northern Skunk and Star Dawg cannabis strains make it possible for Brandy and Michael Morton to give back to their community. The Mortons began operating M’s Dispensary at 421 E. Main St. in downtown Shawnee, Oklahoma, last November.

In addition to donating a portion of the company’s monthly profits to local homeless outreach efforts, the Mortons offer continuing education courses in an attempt to show the health benefits of cannabis.

“We want to help change the stigma around medical marijuana. It’s real, and that’s not the way it should be,” said Citizen Potawatomi Nation member Michael Morton. “One of our missions is to show that this is a legit business with legit medicine. It’s not just some hippies smoking pot.”

Taking that objective seriously, the Mortons and their staff make a point of complying with medical privacy laws and not allowing any customers without a medical marijuana license in the dispensary’s showroom. They also handle the cannabis using sterile gloves rather than bare hands.

“It’s standard in the medical field, so why not here?” Michael Morton asked. “We have patients who are immuno-compromised and could catch something from one of us if we’re not careful.”

Each of the Mortons has more than a decade of nursing experience, but they were not introduced to the benefits of medical marijuana until Brandy Morton tried it to address excruciating leg pain associated with Raynaud’s Disease while on a trip to Colorado.

“It changed my life completely,” she said. “I honestly did not get the benefits of medical marijuana until we saw it in our personal lives.”

In June 2018, Oklahoma voters approved a ballot measure to allow residents to legally grow, possess and use marijuana for medicinal purposes after meeting certain prerequisites, including obtaining a license following doctor consultation.

Along with use as a non-opiate pain reducer for fibromyalgia, multiple sclerosis and other conditions associated with chronic pain, anecdotal evidence shows medical marijuana as an effective muscle relaxant able to minimize the tremors associated with Parkinson’s Disease. It can also help treat glaucoma and nausea.

Under the rules adopted by the Oklahoma State Department of Health after the passage of State Question 788, a doctor must register with the Oklahoma Medical Marijuana Authority in order to provide a recommendation for a medical marijuana license.

Despite a dozen Shawnee-area limited liability companies listed as dispensaries with OMMA, there is a dearth of prescribing physicians in and around Pottawatomie County. To help fill the gap, the Mortons announced in December a partnership with Dr. Sang Lee, a board certified emergency medicine doctor based out of Bethany. Dr. Lee comes to the dispensary multiple times per month to meet with patients interested in potentially obtaining a medical patient marijuana license.

Most of the dispensary’s patients so far have been elders with limited resources to get to Tulsa, Oklahoma City or other community with an OMMA-registered practitioner.

“There is such a need here in Shawnee,” Brandy Morton said. “It is a huge deal to have a great physician like Dr. Lee be willing to come here and help patients.”

Nationally, 29 states and the District of Columbia have at least partially decriminalized marijuana use and/or possession. However, federal law still classifies marijuana a Schedule I drug, one with no acceptable medicinal use.

Until Congress revisits that classification, possession of marijuana — for medicinal or recreational purposes — is still considered illegal in Indian Country, including on trust land and in tribal casinos.

It also means that Oklahoma’s dispensaries have to operate as cash-only establishments. Under the Controlled Substances Act, it is against the law for banks to deal with proceeds from any business connected to a Schedule I drug, including marijuana decriminalized at the state level. M’s Dispensary has an ATM on site.

Despite the federal-level restrictions, the Mortons see their business as a chance to care for their neighbors, similar to Tribe’s service programs.

“Our hearts are in the right place,” Michael Morton said. “We’re doing this for the community. I grew up seeing things done for the community by the Tribe. I remember when it was just a smoke shop and bowling alley over there.

“The Tribe’s done everything they can for the community. They’ve put forth that precedent in my mind that it’s achievable. Now it’s our turn to help the community.”