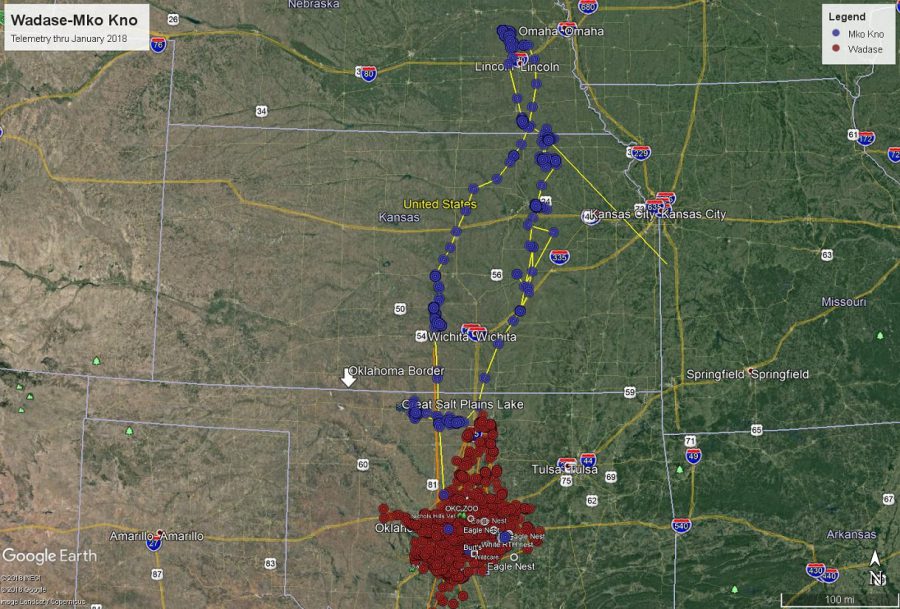 At the time of our last update, Mko Kno was still north of Lincoln, Nebraska, a few miles south of the Platte River. The weather in that area had been rather mild for winter, but the holiday season brought significant storms. We had several days of single-digit temperatures here overnight, and we are bracing for another round of arctic air. Each time a storm pushed south, Mko Kno moved south as well, and he was back in Oklahoma by Jan. 1.

Mko Kno followed the same general trek heading south he used going north. The paths were less than 60 miles apart at the widest stretch but were generally much closer.

Just before Thanksgiving, he began moving south from Agnew, Nebraska. He flew more than 50 miles before he stopped and spent two weeks in and around Blue Springs at the power plant reservoir and the Big Blue River.

His next major move was another 25 miles to the southeast along Clear Creek south of St. Bridget in Kansas, where he stayed for more than a week. He continued south to Vliets and the Black Vermillion River. He spent a few days exploring the area. Telemetry showed he reached 4,690 meters, just over 15,000 feet, Dec. 9 as he ventured to the east and stopped for an afternoon at a large reservoir south of Centralia. The following morning, he flew nearly 40 miles south to St. George along the Kansas River.

He meandered along the river for several days before he turned east to visit Wabaunsee on the morning of Dec. 30. That morning, we were preparing for single-digit temperatures to arrive with the New Year here in Oklahoma as he began heading south again to stay ahead of the weather. He stopped briefly at Council Grove Lake and Cottonwood Falls, and he reached El Dorado Lake by the end of the day, 80 miles from where he started. 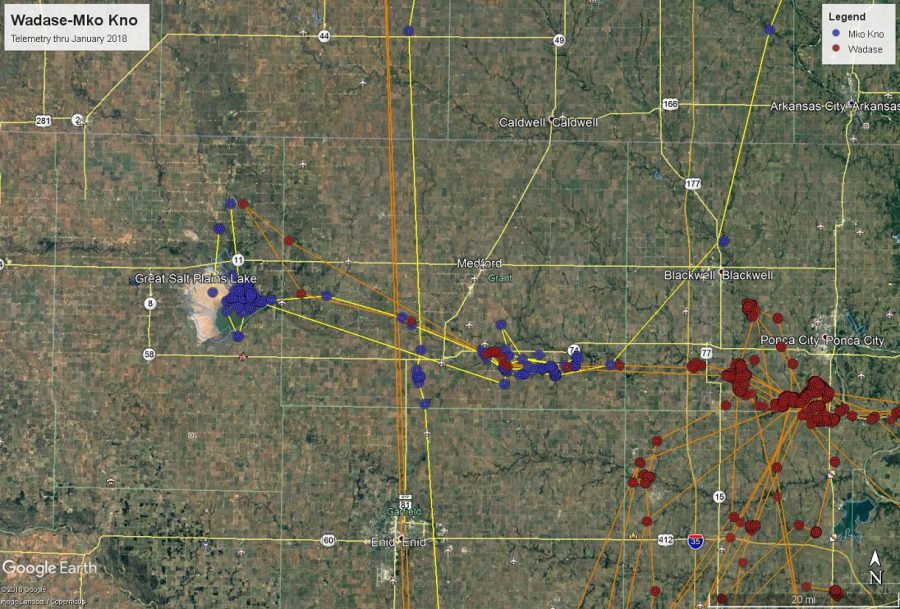 New Year’s Eve, he traveled another 70 miles before crossing into Oklahoma, where he stopped along the Salt Fork of the Arkansas River near Lamont. Since then, he has worked his way west along the river to Great Salt Plains Lake. The most recent telemetry downloaded shows him still in the area, moving between the lake and the river near Lamont.

The Oklahoma Bird Listserv we follow has several reports from the Great Salt Plains Lake, and birdwatchers have indicated in posts that the lake has an abundance of waterfowl. That is a good indication that, even without parents to follow in the wild, he has the instincts necessary to survive and thrive on his own. Those instincts continue to lead him to good food sources because surviving in extreme cold requires much more food. He would not be able to cover the distance he has if he wasn’t finding food.

If he stays in the area, we plan to make a trip and hopefully see him. At the very least, a trip will give us the opportunity to check out the lake and new portions of the river we had not seen in the past when we were looking for Wadasé Zhabwé. A few years ago, she followed the Salt Fork and made her way to the lake but didn’t stay long.

Until recently, Wadasé has stayed on and near rivers. She spent less than 20 days total on lakes until fall 2017. She has not ventured far from Lake Stanley Draper except for a half-dozen times in the last few months. Studying her telemetry in the past few weeks, she frequented a stand of old cottonwoods just south of the lake every evening to roost. We suspect this may be where she chose to nest.

We have made several trips to the lake, but in true fashion, Wadasé chose to venture off the days we went looking. We have also been in contact with the landowners. They let us know they saw eagles around the property recently, but they had not looked close enough or did not know to look for a band or telemetry. They are excited about the prospect of having a chance to see if it is in fact her. One nest we have monitored for several years already has eggs, and others are busy with activity as pairs of eagles work on their nests. Typically, eggs are laid in wild nests by the first week of February in this area.

By the time the next paper comes out, we should know if she has chosen a nest site. It seems like we have been saying “next fall” or “next season,” and now that season has possibly arrived. We can hardly contain ourselves. However, there is still a chance she does not nest this year. Once again, we would hope for one more year from her telemetry, even though we know we are past triple-bonus time.

We continue to hold our breath when we download telemetry. On the third day when it is time to download new telemetry, there are all kinds of emotions. As the data loads on the computer, it is thrilling and terrifying. It is incredible to see Mko Kno progress and make his way back to Oklahoma and visit some of the very same places as Wadasé. Her telemetry had two battery drains, and we can only hope that it is nothing more than the recent dreary overcast weather and cold temperatures that contributed to the low battery. As always, it’s an honor to continue to be able to share their stories, and we especially look forward to sharing them with you.

We encourage you to keep your eyes out for Wadasé and Mko Kno if you are near any of the areas they frequent. For more information about the CPN Eagle Aviary in Shawnee, Oklahoma, or to read previous updates, visit potawatomiheritage.org. Share your encounters with Wadasé, Mko Kno or any other eagles in Oklahoma (or wherever you may be) with us at aviary@potawatomi.org.