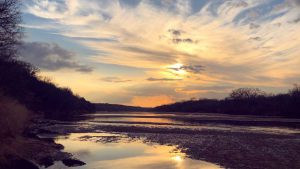 The sun sets over the river from the last telemetry reading.

Everything is finally green and lush here in the river bottom after quite a reluctant start to spring. The milkweed we planted is up and just beginning to bloom. Our first monarchs have arrived along with the hummingbirds and a host of other migratory birds. In April, we celebrated the fifth anniversary of Wadasé Zhabwé’s release. We continue to monitor her telemetry without any further battery issues. Currently, she is hanging out along the Washita River just south of Tabler, Oklahoma.

But Mko Kno is already completely on his own. His last GPS point was logged the evening of Feb. 25. From the information gathered, it appears he went to roost in a tall tree near the edge of the Cimarron River in an area known as Horsehief Canyon, nearest to the town of Coyle. There were several battery drains leading up to the loss of telemetry data the previous weeks during heavy winter storms. We expected the unit to power back up as the weather cleared, and, in fact, it did just a few telemetry cycles later but only for two final points.

We’ve been holding out on sharing this part of his journey because we didn’t have much information, and there were more questions than answers. All the last telemetry data could tell us is where it was located and that it was no longer moving. We wondered, did the telemetry malfunction, or had it simply fallen off already? Or had something happened to Mko Kno? What would we find when we got to that last GPS location? We had no way of knowing.

We know the statistics and survival rates of first-year eagles, so we prepared ourselves the best we could for the trip ahead of us and tried to remain optimistic. We didn’t know what we might find and were honestly afraid of what we might learn. This was the first time we would go track an eagle with telemetry and hope not to find it.

Once we arrived in the remote area, we were not able to track down any landowners on such short notice, but with the help of the local game warden, we were granted access into the nearest property and began the two-mile trek to the river. As we got closer to the point, we realized that we were on a bluff above the river and would have to work our way down nearly 100 feet. Over boulders and steep terrain, we began making our way to the GPS point. The ground was covered with a thick blanket of leaves under the canopy of dense trees; finding anything would prove to be difficult.

Once we were as close as technology could get us to the GPS location, we moved slowly, circling the area as we spread out, searching for even the smallest sign that Mko Kno had been here. First, there were down feathers, just a few, which had landed on smaller trees or stuck to the taller grasses. Then, there were fish bones under a great perching tree closer to the river’s edge. We found more down and then one large, primary feather that appeared to have been molted in perfect condition. Those were all good signs that an eagle was successfully fishing and eating along the river. To our relief, what we did not find was Mko Kno. Even though we did not find his telemetry, we feel strongly that the unit came off and most likely is in the river because of the areas for great perching are so near the river.

We talked with Rob Domenech from Raptorview Research Institute, who put the telemetry on. He said he felt good about the data gathered from Mko Kno’s telemetry and that he feels like the telemetry just came off as it should. He reminded us that six months to a year is the average time for telemetry to stay on an eagle. Wadasé is the exception. We have since made contact with many of the landowners in the area and are happy to report a few think they spotted him along the river just after our visit. Both individuals reported a silver band on a juvenile eagle as they watched him eating fish along the riverbank. Without any evidence to the contrary, we feel like Mko Kno is doing well on his own. He is a strong, capable young eagle. While we may not have telemetry, he still wears a captive produced band and a U.S. Geological Survey (USGS) Bird Band, and if found, we would be notified.

Even though our time tracking him was brief, we learned so much from the data gathered. For one, we know eagles don’t read the books the experts write. Everyone assured us that Wadasé would return to Florida, where she was hatched, but she has never left the state. Mko Kno was hatched here, left the state within a few weeks of his release and has already visited good portions of Oklahoma, Kansas and Nebraska. From the data collected, we know he flew more than 2,266 miles since he was released until Feb. 25, but probably more if we could add the days that we had no battery signal from the unit. The highest point recorded was 15,387 feet in December. The longest distance flown in one day was just over 118 miles with an average speed of 21 mph on Oct. 17, when he flew from south of Windom, Kansas, to Blue Rapids, Kansas.

We continue to check his telemetry, just in case. We plan on making one last trip to the area with a metal detector to see if we can locate the GPS backpack. Maybe in the future, a sibling might have the opportunity to wear it.

The situation is bittersweet. Following Wadasé so long has spoiled us all, and this part seems so brief with Mko Kno, but he knows where home is. Perhaps we were wrong about one thing: He is not truly on his own. We continue to keep him in our hearts and prayers, and marvel at the progress we saw in six short months. Mko Kno is out there carrying our prayers, traditions and the Tribe forward, and for that, we can only be grateful.

We encourage you to keep your eyes out for Mko Kno. There’s no telling where he may go, and Wadasé, if you are near any of the areas she frequents. For more information about CPN’s Eagle Aviary near Shawnee, Oklahoma, or to read previous updates, visit www.potawatomiheritage.com. Share your encounters with Wadasé, Mko Kno or any other eagles in Oklahoma or wherever you may be with us at aviary@potawatomi.org.