Miller honored as one of Oklahoma’s Indian Elders by AARP

Citizen Potawatomi Nation tribal member Joe Miller of Choctaw, Oklahoma, is one of 2018’s AARP Indian Elder Award recipients. The award is a tribute to the venerated position of honor and respect tribal nations give their elders. The Anderson family descendant received this year’s Indian Elders award for his impact on Oklahoma athletic combat sports through the past several decades.

“There’s nothing like getting an award for being old,” he said with a laugh during a phone interview with the Hownikan.

Miller is the longtime administrator of the Oklahoma State Athletic Commission. The OSAC is the state’s regulatory body that oversees boxing, wrestling, kickboxing and mixed martial arts competitions to ensure the safety of participants and the public. 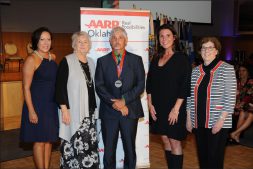 Born in Harrah, Oklahoma, Miller has lived most of his life in or near the Citizen Potawatomi Nation’s jurisdiction.

Miller’s great-grandfather’s Potawatomi allotment was originally along Peebly Road on the far northwestern portion of CPN’s historic reservation boundaries in Oklahoma. He grew up with the knowledge of his maternal line’s Tribal heritage, and he recalled his first experience with the Nation was a painful one.

“I was probably 7 or 8, and we went to the dental clinic in Shawnee. They didn’t care about hurting you in those days,” he said. “I remember dreading it. But that’s when I really knew and became more involved in where I came from.”

Miller’s father hailed from New York. His exposure to the sport there – Madison Square Garden was the mecca of boxing before the development of Las Vegas – created an interest that traveled with him to Oklahoma. Though it was never a serious endeavor for young Joe Miller, his father’s experience as an amateur fighter in the U.S. military gave him familiarity with the sport.

Between World War II and the Korean War, the Selective Service System required able-bodied men in the U.S. to serve two years in the armed forces. Many young men who might otherwise have been in college or professional athletics donned military uniforms instead. To keep these soldiers, sailors and marines in shape and occupied, sports became a central part of military culture. Teams of football, basketball and baseball players consisting of some of the country’s top talent took part in highly competitive exhibitions. Boxers like Miller’s father also participated, traveling from outpost to outpost as part of the Army Boxing Team.

For the younger Miller though, his true talent was on the gridiron.

He was a standout quarterback at Choctaw High School, going 19-3 in two seasons before suiting up for Division I football at Oklahoma State University.

Miller said he probably should have gone into coaching when his playing career ended in 1975. It’s an activity he still participates in on a recreational basis with his grandson’s elementary school-aged teams. However, an opportunity presented itself with the armed services, and he never looked back.

He signed up with Oklahoma Army National Guard, serving as a guardsmen for the first six years of his enlistment. For the next eight years, Miller was a recruiter before attending officer candidate school. Once he completed OCS, his superior informed him of a new initiative for guardsmen that would focus on the war on drugs.

“I was working as a recruiter, and one of my colonels approached me about the program,” Miller recalled. “I had been working with personnel and logistics. He knew me and thought I would fit in well. It was a brand new program that Congress had funded … and it sounded like something fun.”

He had no background in enforcement, yet his skills in logistics and planning fit those required for the position. As the Reagan Administration began pushing funding to local law enforcement for its war on drugs, the National Guard units across the country received authorization to assist civilian agencies. In his role as director of counter-drug operations for the Oklahoma National Guard, Miller organized this assistance.

“I worked side by side with the DEA and Oklahoma Bureau of Narcotics, planning their drug eradications on marijuana, meth labs, so on and so forth,” Miller said.

The National Guard units under his command provided support in the form of planning and execution of their drug raids. If law enforcement required additional personnel, helicopters or surveillance assistance, they called Miller.

In 2000 after 27 years serving in active duty, he retired as captain. He then joined the Oklahoma Bureau of Narcotics as an evidence technician.

In 2004, he retired from the bureau. His longtime connection to the boxing ring, which was initially forged by his father, opened another opportunity.

Stepping into the ring

Leaving OSU in 1975, Miller said he missed a central aspect that football provided.

“After college, I had to do something competitive, so I started boxing. I had a pretty good amateur record. I ended up having 46 amateur fights,” he said.

Miller’s skills in the amateur circuit peaked with his win of the 1976 Kansas-Oklahoma Golden Gloves competition as a middle weight. He followed that up with a win in the 1980 Toughman Contest in Oklahoma City.

“By that time, I was thinking pretty highly of myself and said, ‘You know, I need to just turn pro,’” Miller remembered. “Well, I found out it was a whole lot rougher as a pro fighter than it ever was as an amateur. Those guys were a whole lot more serious about it than I was.”

Miller had a short 4-4 career.

“I felt as beat up after I won a fight as I did after I lost one,” he said.

After retiring, he never gave up his love for boxing and became a referee for competitions throughout the state. Some people have hobbies on the weekend, and for many years, Miller’s was as the third person in the ring. As a referee, he oversaw 56 professional boxing matches, three of which were world titles. As a ringside official, he judged 79 professional boxing matches. Four of those were world titles.

His most memorable bout to referee was a World Boxing Council fight between Tony Ayala and Anthony Bonsante.

“It was a world title. It was bigger named fighters. They were middle weights. It was on ESPN, and it was action packed and just a fun atmosphere out there,” he said.

When he retired from the Oklahoma Bureau of Narcotics in 2004, the Oklahoma State Athletic Commission had an opening for its top position. With his background in boxing and organization, Miller easily fit in as the OSAC’s administrator that year.

Citizen Potawatomi Nation reached out to Miller when it hosted a world heavyweight title fight in 2004. He provided the Tribe guidance on how
to set up the Citizen Potawatomi Boxing Commission, which regulates the Nation’s combat sports events to this day.

“If not for Joe Miller, we would not have had the expertise to begin our boxing initiative as soon as we did,” said CPN Vice-Chairman Linda Capps. “There was a mountain of red tape to work through before we could be nationally recognized as a tribal boxing commission. He had a wealth of information in regard to both state and national boxing regulations, which helped us tremendously.”

Though he couldn’t serve as a member of the CPN Boxing Commission due to his position with the state, he consulted with the Tribe on how to establish their own in accordance with federal law. His son Joey, a former boxer himself, currently serves as the head of the Tribal entity.

“It’s really one of the most respected commissions in terms of a tribal boxing commission in the country,” Miller said.

In addition to helping guide the development of the boxing commission, Miller previously served in the Nation’s former governing structures. At one point, he served on the grievance committee, a forerunner to the current Tribal legislature. In 2015, Miller became a member of the CPN Gaming Commission.

It is due in part to his service to his Tribe and the state that Miller was honored along with more than two dozen other tribal elders from Oklahoma’s 38 Indian nations.

AARP State Director Sean Voskuhl said, “This event celebrates a lifetime of service from these distinguished elders. The common thread between the honorees, regardless of the contribution, is the commitment to community and service.”