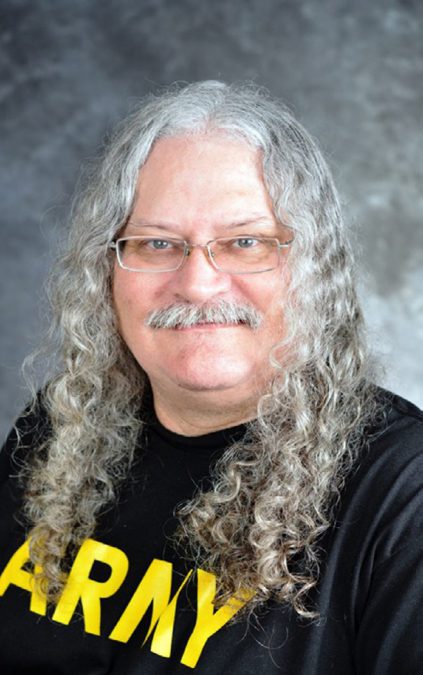 Citizen Potawatomi Nation’s annual Family Reunion Festival provides an opportunity for members who may have recently gained tribal citizenship to get a firsthand experience at the tribe’s largest Citizen Potawatomi event. One such member was Michael Harmon, a professional photographer who was on hand to shoot and experience his very first Festival.

“I just wanted to do something with my life,” he recalled. “My dad was a Marine, my stepdad was in the Guard, in that particular unit. I got in to the field of field wire and communications.”

He spent a year in the guard while also working at a grocery store in Oklahoma City before deciding to leave the state.

“I visited the Navy recruiter and said, ‘What can you do for me?’” he said.

In just three short weeks he was on his way to U.S. Navy training in San Diego, California. While serving on board the USS Enterprise (CVN 65), he finished his high school degree via correspondence.

Over the next three decades, he served in the Navy, Army and Army National Guard. His last active duty was in 2003 when George W. Bush activated the National Guard as part of the preparations for the Iraq War.

“I’ve been to many countries while serving in the U.S. military,” he said. “I was in Kuwait and Qatar, where I was a contractor.”

Like many who have served, his nonmilitary career path was impacted by his work while in uniform. While stationed at Pearl Harbor in the Navy in the early 1980s, he was assigned to SIMA PH (Shore Intermediate Maintenance Activity Pearl Harbor) and was selected to be the command photographer. Though his passion for photography began a few years before, it became a constant in his life.

“Most of my photography skills were honed in my second hitch in the Navy,” he said. “I really honed my skills with the CINCPACFLT (commander in chief of the U.S. Pacific Fleet) at Pearl Harbor, where I had great mentorship.”

“I worked a deal with the 89ers’ PR department to take photos of them, headshots and stuff like that in exchange for getting into the ballgame,” he said. “I ended up getting a good shot of the San Diego Chicken holding a little baby, so I called The Daily Oklahoman. They bought the photo and ran it.”

He had also gone back to school, studying first at Oklahoma City Community College before transferring to Solano Community College in Fairfield, California. He eventually graduated with a degree in photojournalism from Humboldt State University in 1992.

While the degree helped polish his skills, Harmon had been working in the news industry for some time. He had previously served as a stringer for newswires like the Associated Press and United Press International, having also shot for a number of publications across Oklahoma and California where he had eventually moved. His work has run in Newsweek, Sports Illustrated, San Francisco Chronicle, Time, Los Angeles Times and other publications. While working at Mohave Valley Daily News, he won an award for general news from the Arizona Associated Press.

One of his most memorable shots came in the aftermath of the 1995 terrorist bombing of the Alfred P. Murrah Federal Building in Oklahoma City.

“The subject matter isn’t anything great; it’s just a trailer in a trailer park in Kingman, Arizona that was shot for Time Magazine,” he said. “No one else could get in to shoot that trailer that Timothy McVeigh used to live in.”

When it comes to his ties to Citizen Potawatomi Nation, Harmon said despite rumors among family that there were Native American ties, he never could track down the lineage. He examined the Dawes Rolls and records of the Cherokee Nation, never coming up with any ties. Finally, in 2012, his daughter tracked down their family’s Citizen Potawatomi ties through Harmon’s grandfather on his mother’s side, Robert Preston Martin, who was a member of the Ogee family.

Harmon was working as a teacher in China’s Henan province at the time, and filled out his tribal membership application and mailed it back to his daughter, who then sent it on to tribal rolls. When he finally returned to Oklahoma, she encouraged him to learn a bit more about their Citizen Potawatomi lineage. She had been to the CPN Family Reunion Festival once and described the event.

His interest in learning more coupled with that photojournalist’s itch to document the activities that take place at Festival led him to contact the tribe’s public information office. At Festival 2017, Harmon photographed the events taking place, from the reopening of FireLake Golf Course and the tribal veterans’ exhibit at CPN Cultural Heritage Center, to the powwow and Grand Entry on Saturday night.

“I approached it like any other news story, because that’s the way I’m used to shooting,” Harmon said. “But after I got there and got settled in and saw how things were done, I was really pretty impressed.”