US Fish and Wildlife Service information for Gathering 2019 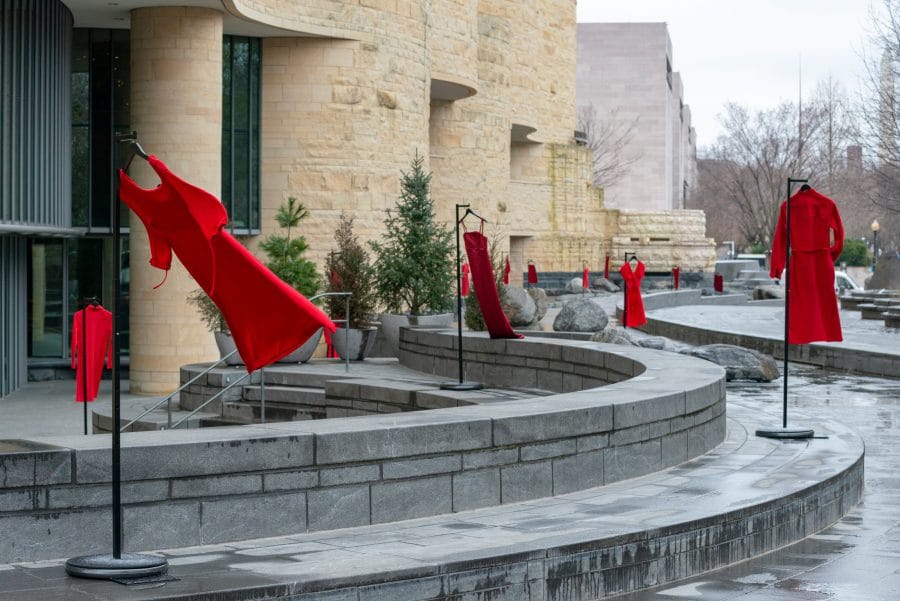 In March, New Mexico U.S. Representative Deb Haaland brought the topic of missing and murdered Indigenous women and girls to the floor of the House of Representatives for the first time. The Subcommittee for Indigenous Peoples recognized during an oversight hearing that Native women face homicide rates 10 times the national average, according to the U.S. Department of Justice.

Only a few days after the meeting, Citizen Potawatomi Nation District 2 Legislator Eva Marie Carney attended the Safety for our Sisters: Ending Violence against Native Women symposium at the Smithsonian Institution’s National Museum of the American Indian in Washington D.C.

The convention featured a video welcome from Haaland, a discussion of land and bodily sovereignty, and a presentation by Canadian Métis artist Jaime Black, who also displayed her installation exhibit, The REDress Project. Carney looked forward to seeing it, remarking, “It’s quite recent that some of these issues are really getting to the forefront.”

Exhibitions began 10 years ago, mostly in Canada. Empty red dresses hang in remembrance of missing and murdered Native women unaccounted for in any data. The Center for Disease Control and Prevention listed murder as a leading cause of death for Indigenous women ages 10 to 34 in 2016.

Black purposefully separates REDress from politics; however, the museum placed the dresses on the edge of a waterway that follows behind the building nearly in the shadow of the U.S. Capitol.

Black attended a performance art conference in Bogota, Colombia, roughly a decade ago, and one particular piece inspired the project and pushed her to become an artist full time. Approximately 300 women spent six hours in the downtown square doing a variety of acts drawing attention to missing and murdered women in their country and city.

“Having seen that was so powerful for me as an artist, to realize the potential of art to make change in public space in the here and now and to create space for people to have their voices heard here and now,” she said.

At one point, about 50 dancers in red dresses performed to a traditional drum and then split up, calling out and searching for someone. They gathered again and helped each other climb up to the top of the statue of Simon Bolivar that stands in the middle of the square. The woman at the top screamed out, “Where are they?” The powerful message overcame Black. The red dresses stuck out, and she wanted to use the symbol at home.

“Red’s always been like a really powerful color to me personally. It’s the color of lifeblood. It’s our vitality and what connects all of us,” Black said. “Using the color red is a way of kind of telling the story of us, of violence that is also happening.”

Black takes her installation art into public locations to broaden the audience and help onlookers understand the scope of the problem.

“Many, many people may not know anything about Indigenous anything, but they still will encounter the dresses and ask questions. And many, many people don’t go to art galleries or museums or places like that,” Black said.

The rapid development of the project surprised her. In the beginning, people contributed to REDress by donating clothes after the University of Manitoba’s Women’s and Gender Studies Program publicized the project. She received over 300 pieces from across Canada within 18 months.

It first opened as a large-scale show at the University of Winnipeg. Since then, four or five spaces exhibited the installation every year, including a small appearance in London and another at the Kamloops Indian Residential School in Canada, which Secwepemc children were forced to attend and abandon their Native culture.

Legislator Carney works toward rights for Indigenous women, knowing these issues span generations with no public recognition. She was encouraged by seeing one of the problems highlighted. During her visit to the museum, a thunderstorm moved into the area and turned the sky gray.

“Here are these dresses that are blowing in the wind, drenched and just so forlorn looking,” she said. “It just was, I thought, kind of in some ways the time to see it to really kind of understand just what it is saying about missing and murdered women.”

Carney described it as “incredibly moving” and “visually striking.” The word Black hears the most is “haunting.” Those feelings push people to ask questions and learn about the plight of missing and murdered Indigenous women.

“They feel the absence, and they feel the presence. They feel all that, and then they ask because they feel that, and I think that’s the important thing though,” Black said. “And the kind of amazing thing about creative work and art based work is that it can have that impact on people. … We’re really flooded with factual information all the time, but when you are hit in the heart — that lasts.”

Education remains her primary goal with the project and choice of public space. She wants “as many people as possible” discussing what they learn from REDress, including another layer of the European colonization of North America.

“They took the power away from the people who had the most power in the Indigenous community, and that was the women. … And so that kind of violent relationship and silencing of Indigenous women has been in the fabric of this country since the onset of colonization, and it hasn’t changed,” Black said.

“We really, really need to get honest about what’s truly going on, on the ground, before we can change it. But I think the dresses themselves are almost like a way of just telling the truth first because I think that’s the first step in healing.”

Black believes the conversation in Canada surrounding missing and murdered Indigenous women gained volition over the last few years, and she wants to bring that to the United States. She continues to connect with women and other artists to reclaim their culture and create spaces that serve them.

“Here in Canada, there’s a real insurgence of Indigenous clan mothers and matriarchy, and people are really talking about that a lot and really kind of getting together trying to piece together Indigenous governance,” she said.

Black opened The REDress Project to the public two years ago. She marvels at the ways artists engage with the symbol, from beading and painting to installations and statements about Indigenous land rights. She hopes the message and imagery expand and continue past her exhibitions.

“I just need to stay true because I feel like by putting up those dresses, I’m calling in the spirits of the women, and that’s sacred,” she said.