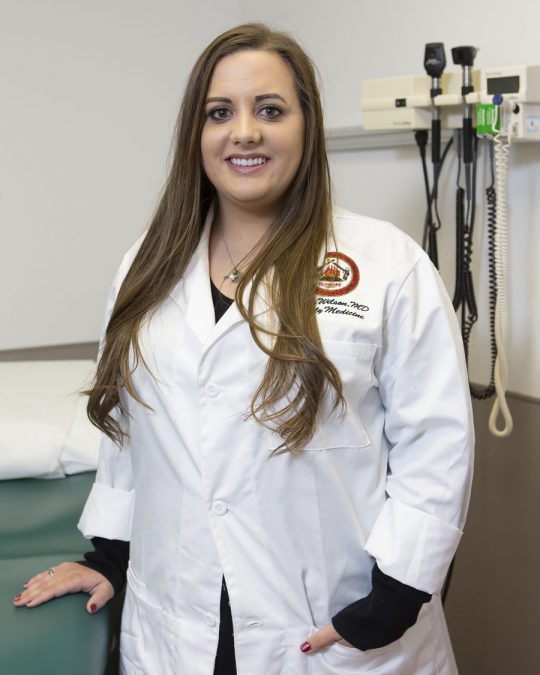 In 2016, Citizen Potawatomi Nation Health Services recorded nearly 150,000 physician visits. With each provider seeing as many as 1,200 patients a year, it might seem impossible to build a relationship with each one. Yet, that’s what one of CPN Health Services providers strives to do.

Wilson considers her role at the health clinic as one part of the “complete package” of care available to Tribal members, citizens of other federally recognized tribes and Tribal employees. The health system at the Tribe has grown in recent years, adding a second clinic near one of the largest tribal gaming operations and expanding services like urgent care, dental and optometry. A new imaging center is also in the plans for this year.

In addition to the services offered, Wilson mentioned that CPN is unique in allowing doctors to have more time for patient visits. Compared to her peers that went to nontribal clinics or larger medical facilities, Wilson is often allowed up to twice the amount of time with each patient.

“When you look at our facility, we really get to build those relationships with the patients, and I think we have awesome resources,” she said. “Our patients have access to a pharmacy, lab and X-ray and behavioral health and so on. … All in-house. And it really makes a difference; it’s the complete package.”

Wilson, a descendant of the Ogee family, grew up in Choctaw, Oklahoma, west of Shawnee. Before attending medical school at the University of Oklahoma, she earned an undergraduate degree in health science studies from Baylor University in Texas. She chose to finish her medical training further from home, completing her residency training in Tennessee.

“I knew that I wanted to end up practicing in Oklahoma and be back in this area,” she said. “That was something that was always really important to me. Most of my family is here, so I figured that my residency was the last opportunity I had to live out of state and experience somewhere new. I interviewed all over the country, not really sure where I wanted to do my training, and when I went to Tennessee, I loved what the residency program offered.”

Wilson grew up in a family of medical professionals; her mother is a nurse, her father a physician. She’s prompt to mention that she wasn’t pressured to follow in their footsteps, pointing out that her other siblings chose different career paths. She knew she wanted to go into the medical field from a young age, but the choice was confirmed after she’d done some on-the-job shadowing when at age 16.

“The older I got, the more interested in it I became, and I’ve always been interested in getting to know people and their stories,” she added. “I was passionate about being able to take care of everybody from babies to grandmothers, so I think that’s kind of what led me to family medicine. I enjoy getting to know the whole family.”

Wilson admits that a career in medicine isn’t for the faint of heart. Most medical professionals endure many years of college and then several more years of training before they are allowed to practice on their own. Throughout that process, there are many challenges, which continue throughout an entire career. Often, family providers are interacting with patients on some of their worst days, delivering bad news about their health or helping them through a difficult situation.

Wilson says she always strives to be a bright spot in her patients’ lives. She draws her inspiration from her brother Josh, who has Down syndrome.

“Despite all the challenges he has been met with in his life, every day he wakes up with a smile on his face, and he has never met a stranger,” she said. “He’s just overcome so much, and just seeing the joy he has in everyday things inspires me to get out there and meet as many people as I can and to be as positive as I can.”

CPN has made funding health services a priority, making up for the inadequate funding the tribe receives from Indian Health Services. According to testimony given by Native American law expert Lloyd B. Miller to the Senate Committee on Indian Affairs Oversight Hearing, IHS underfunded tribes by nearly $100 million per year, while the Bureau of Indian Affairs also failed to meet contract obligations. The expansion of health services by the tribe aims to help eliminate the barriers to health services experienced by tribal members.

“I think any time that we have direct access to services and can keep those in-house that we’re able to get the patient taken care of quicker and we have easier access to those services,” Wilson said. “When you have direct access to your specialists it is easier to coordinate a patient’s care and take better care of them in the long run.”