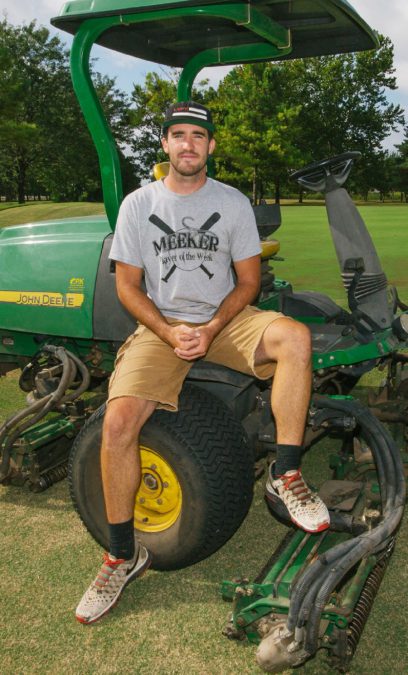 Tribal member Caleb Martin, originally from Meeker, Oklahoma, spent the summer of 2017 among some of the most notable names in Los Angeles after an internship at Los Angeles Country Club took him to sunny California to hone his experiences as a golf course superintendent.

In the spring, the Holloway family tribal member was in the final stages of managing the five-hole trainee golf course at Oklahoma State University-Oklahoma City, where he was concurrently completing an associate’s degree in advanced turf management. He found the internship in Los Angeles while searching for jobs on the website of the Golf Course Superintendents Association of America and applied after speaking with his supervisor at OSU-OKC.

“Since I graduate in December, I was looking around to see what kind of a salary to expect once I did get out there looking for work,” Martin said. “I texted my boss who said ‘Go for it’ and then I sent in my resume. About a week later I got a phone call (from L.A.).”

From May to August, he worked on the club’s north course, maintaining its putting greens. He filed daily reports on each green’s health while also conducting routine maintenance like green aerification and mowing.

“Every morning I went out, probed the greens with the moisture meter and added water if necessary,” he said. “They’re bent grass greens, which can wilt in the heat, so keeping them watered and in good shape three times a day is a lot of what I did.”

On occasion, he supervised a crew of four to five full-time course maintenance staffers on special projects, an experience that differs a bit from his role as the sole employee at the OSU-OKC course. He credited his time working at FireLake Golf Course for providing a base of experience that he employed in the work crew duties at L.A. Country Club.

“It’s kind of like the things I would do at FireLake, but just on a whole other level,” he said. “It’s a lot different because all the responsibilities fall on my shoulders, but it’s other people that are doing the work. I have to be firm, but not a tyrant because I’m not here permanently, so you have to find that delicate balance between being friends and still getting the job done for a golf course ranked in the top 100.”

He’s paid an hourly rate for his work and his housing and three meals a day from the pro shop are provided without charge. Aside from gaining valuable course management experience, Martin said staff and fellow interns are allowed to play the country club’s courses for free once a week. The course, whose greens he maintains and occasionally gets to play, is the 24th highest-ranked course in the United States. In fact, the very greens he is responsible for will host some of the best amateur golfers from Europe and the United States in this year’s Walker Cup, a tournament similar to the Ryder Cup, though played by amateur golfers rather than professionals. The venue is also set to host the U.S. Open in 2022.

Martin will return to OSU-OKC for his final semester before graduating in December, but already has plans on taking another internship in February. Seeking a bit more professional experience, Martin applied and has been accepted into an internship at Ohio’s Muirfield Village Golf Course, which was designed by Jack Nicklaus. It hosts an annual tournament honoring the greatest golfer of all time, and it is also ranked No. 15 in the nation. The internship there runs February-October, and then he’ll decide what the future will hold.

“I’m very excited about that,” Martin said. “After that, I’ll see  where it takes me.”