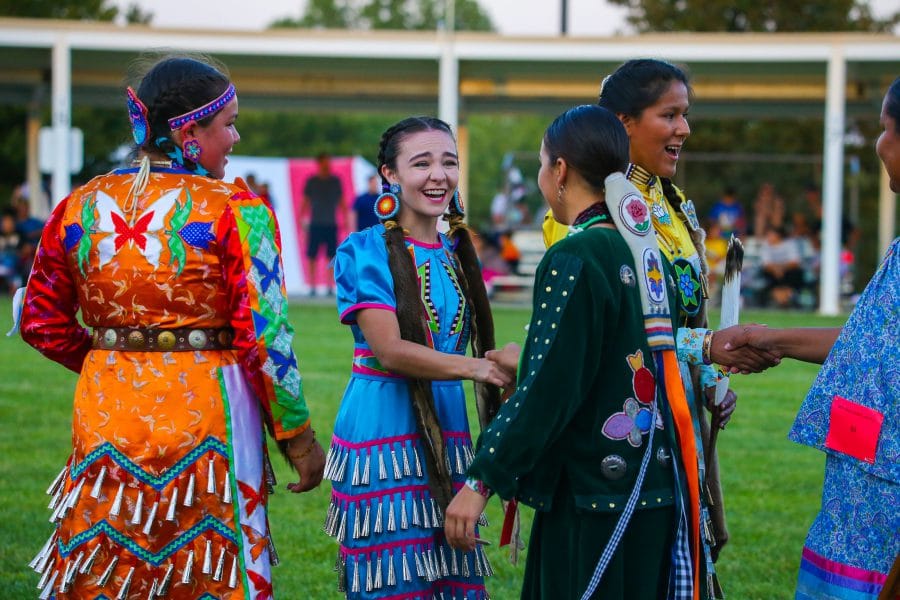 Purdue University sophomore Erin Locke represented the Citizen Potawatomi Nation during the Miss Potawatomi Princess competition at the Gathering of Potawatomi Nations last year. While she did not win the title, she was a pageant finalist.

“Being Miss Potawatomi Princess, I would have a lot of younger kids, younger girls watching me,” she said. “And so I thought that it would be a great way to show how to be a Potawatomi woman.”

The Burnett family descendant first heard about the pageant two or three years ago, but waited until last year to apply.

Eligible contestants are between 13 and 19 years old, and drug and alcohol-free. They have never married and have no dependents. Last summer was Locke’s last year of eligibility, and she wanted to honor her ancestors including her fifth great-grandfather, Abram Burnett.

“I’ve been so incredibly blessed to know who I’m related to, and to know the stories, and to know the language,” she said. “I love being Potawatomi because I have so many connections to my history and to other members of the Tribe as well.”

Locke earned her place as a Miss Potawatomi Princess finalist by using her varied talents to learn more about her ancestry. After years of cultural participation, Locke can explain Potawatomi prayer, sweat lodges, agriculture, cooking, language basics and more.

While in middle school, she and her mother connected with Potawatomi culture and wanted to learn everything possible. They traveled along the Trail of Death, attended immersion camps, took online language classes, danced at powwows and went to the Potawatomi Gathering of Nations each summer through her high school graduation.

“I think I really became invested in it myself because you can grow up hearing things from your family, but once you make it your own is when it really has that impact on you,” Locke said.

She started dancing at 9 years old, beginning with traditional style and then learning jingle dancing at 15. Locke continues to jingle dance today.

“It is one of my favorite, most relaxing activities to do. I pray while I dance. Usually, I will pick someone specific that I know who is really struggling physically or mentally, and I will dance and pray for him or her,” she said. “Jingle dancing is one of my favorite methods of connecting with my Creator.”

Her interest in composition also began in middle school. Locke’s English teacher challenged her, which constructed the foundation of her passion for language.

She now studies professional writing and contributes to The Odyssey Online as a member of the website’s Purdue University community. Several of her pieces explore being Indigenous in modern society.

“I’ll get questions like, ‘Wow! Do you live on the reservation? Like, what’s that like?’ And just different obscure questions like, ‘How Native are you?’” she said. “I write a lot of informative writing, I guess, because I do like to be able to teach the people that are able to read my articles what it’s like.”

She enjoys reflecting on her thoughts and feelings about real-world issues in up-to-date, topical pieces. Locke also takes pleasure in creative writing including poetry and prose about Disney movies and characters. People often ask her about the princesses she connects to most.

“I feel like I relate to Moana and Rapunzel because I have that adventurous personality trait that they both have,” she said and laughed. “But I also have that connection to Moana, because she is so invested in her ancestors and the people of her village. So, I always tell people that I’m kind of a combination of both.”

“It was so much fun meeting the other contestants and getting to know a little bit of their background, where they’re all from, what their talents were,” Locke said. “Everyone was super nice, which was awesome because it didn’t even feel like a competition, honestly.”

During the first day of the pageant, the ladies took the stage in their regalia and introduced themselves in Potawatomi, including their hometown and tribal affiliation. Locke’s Potawatomi name is Nanogaskwe or “Hummingbird Woman.”

Contestants next showed off their talents.

“I do a lot of beading in my spare time. So, when I don’t have classes, and when I’m not worried about tests and stuff, I bead. And I’ve been working on beading my regalia,” she said. “For the talent portion, I showed my hummingbird that I’ve been working to bead for some of my regalia.”

The judges held one-on-one interviews with the finalists.

“They just kind of asked me questions like why I wanted to be Potawatomi princess and if I was going to be able to come to some powwows and represent,” she said. “I even got a couple of questions like, ‘What are some traditional foods that you prepare or that you like to eat?’ and ‘What are the nine different bands that exist for Potawatomi?’”

The judges also reviewed the girls’ dancing, and Locke jingle danced in her regalia. The contestants participated in two competitive dances as well as several other group dances. She called it her favorite part of the pageant and an “absolute blast.”

“I wanted to be that role model, and I totally believe that the woman that did win this year exemplifies that just as much as I would,” Locke said.

She believes it is all about something bigger, mainly keeping other CPN members involved. Although the title is not hers, Locke still strives to be an exemplary Tribal member and encourages others to accept the challenge of discovering the culture and customs.

“I know that my ancestors’ sacrifices weren’t for nothing. We’re keeping the traditions around, and I love being able to jingle dance at powwows and keeping that tradition alive, and being able to cook the meals that would be considered traditional, and sharing the stories,” she said. “I love having that knowledge of who I am, because there are so many people that don’t know their heritage.”

Read some of Locke’s writing at theodysseyonline.com/user/@erinlocke.