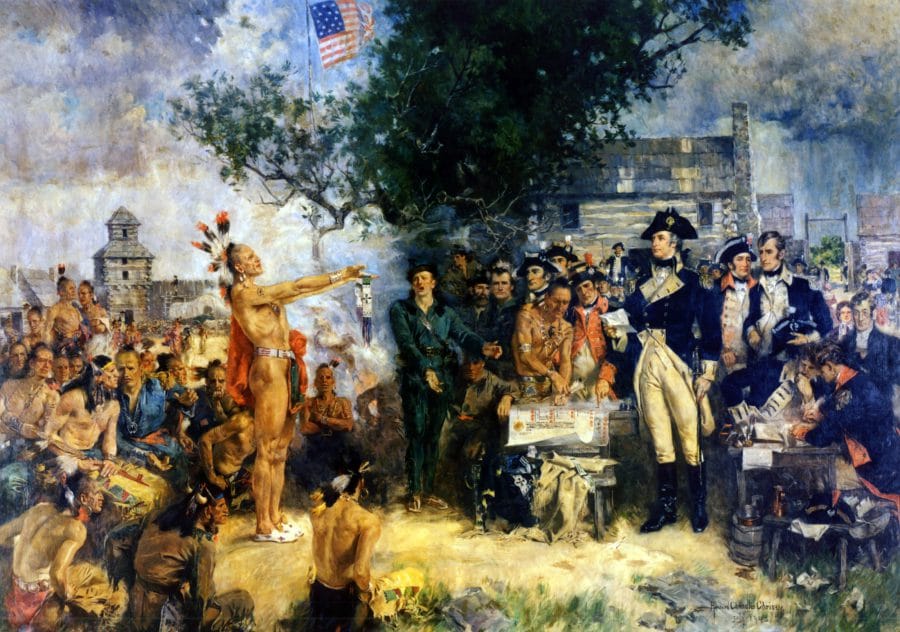 American history books often fail to give accolades to Native Americans, deciding rather to highlight colonial accomplishments while covering up the atrocities committed against the continent’s first peoples. St. Clair’s Defeat during the Northwest Indian War, known as the largest triumph for Native American forces against the United States Army, serves as an example.

Shortly after the Revolutionary War ended, many Native American communities in the Great Lakes region experienced an influx of settlers. The Western Confederacy brought together Miami, Potawatomi, Shawnee, Delaware and other Native Nations to fight against U.S. encroachment.

“The Potawatomi, as well as other members of the Western Confederacy, were signatories to the Treaty of Fort Harmar and were exercising their legal rights to defend, apprehend and punish illegal settlement,” said Citizen Potawatomi Nation Cultural Heritage Center Curator Blake Norton. “They realized that if settlement was not curbed, everyone’s lands and way of life were in jeopardy.”

Great Britain relinquished its sovereignty around the Great Lakes region through the Treaty of Paris after the Revolutionary War. Congress then developed the Land Ordinance of 1784 and the Northwest Ordinance of 1787 as a way to establish the Northwest Territory, which encompassed present-day Ohio, Indiana, Illinois, Michigan and Wisconsin as well as small portions of Minnesota. The ordinances also created a system for admitting new states into the Union.

“The territory was planned to be divided into states, with their own governments, and opened to settlement,” Norton said. “It was a way to ease tensions between the new U.S. government and those colonists wanting to expand west.”

While the British ceded control of the lands east of the Mississippi and south of the Great Lakes on paper, they continued occupying the area and built connections to various Native American tribes across the Territory.

“Illegal settlement of the region had begun prior to the Revolutionary War, but it increased dramatically after and set the stage for what would become the Northwest Indian Wars,” Norton said.

The British hoped to form a Native American barrier state that would hinder U.S. expansion. Although the Treaty of Paris outlined the lands were under U.S. jurisdiction, many Native Americans did not feel represented during treaty discussions and therefore were not obligated to uphold its terms.

“Native claims to the land were not accounted for, and settlement increased, sparking violent conflicts between Natives and colonists,” Norton said.

U.S. leaders wanted to exercise the country’s sovereignty over the Northwest Territory. Financial strain from the Revolutionary War also played a role. Through the Articles of Confederation, the precursor to the U.S. Constitution, Congress lacked the authority to levy taxes; the Northwest Territory served as both expansion and economic opportunity. The U.S. government claimed land ownership to sell to settlers for a hefty profit, which mounted tensions between the region’s large Native American population and the newly formed country.

“The U.S. intended to impose their will by destroying Kekionga, considered the capital village of the Miami and home to high-ranking headman Pacanne, and submit the Native population through fear and force,” Norton explained.

A year prior, the Treaty of Fort Harmar established territorial boundaries between some tribes, including the Potawatomi, and the United States.

“It explicitly stated that the tribes could impose their own justice on unlawful settlement of their territory and that settlers would not be protected by the U.S.” he said. “Harmar’s Campaign was the brainchild of Arthur St. Clair, with Harmar specifically given orders by George Washington and (Secretary of War) Henry Knox.”

Hardin’s men resisted briefly, but their lack of experience was no match for the Western Confederacy. In fact, many of Hardin’s soldiers had never shot a gun, and several fled before firing a single weapon. Others withdrew, crossing the Ohio River into Kentucky.

Two days later, Harmar sent another convoy to attack the Western Confederacy, once again experiencing another defeat at the hands of the Native warriors.

In the end, commander Harmar and his forces retreated to Fort Washington, near present-day downtown Cincinnati, Ohio. The Americans lost nearly 200 soldiers during Harmar’s campaign known today as Harmar’s defeat.

Battle of the Wabash

In 1791, President Washington ordered Arthur St. Clair, governor of the Northwest Territory, to accomplish what Harmar could not. St. Clair recruited a larger force to lead a successful campaign against the Western Confederacy. Lack of experience proved problematic once more. At least half of St. Clair’s recruits had little to no practice on the battlefield or handling weapons. As St. Clair directed the crusade against Native Americans, more and more under his command began to desert their posts. By November 1791, his force was nearly half of its original size at only 1,100 soldiers.

St. Clair gave the Native forces an advantage on Nov. 3, 1791, when the U.S. military camped near the headwaters of the Wabash River. The Americans failed to form any defensive positions.

Dawn the next day, Little Turtle led a group of 1,000 Native warriors against St. Clair in the Battle of the Wabash, also known as St. Clair’s Defeat.

The Western Confederacy first attacked St. Clair’s militiamen, overtaking them with ease. A line of St. Clair’s regulars began firing, but Little Turtle’s men found their weakness and started flanking. As the U.S. forces continued to fall, those following the campaign, including wives, laundresses, cooks, prostitutes and others, joined the battle.

St. Clair eventually authorized a retreat, leaving behind wounded soldiers and supplies. The Battle of the Wabash, sometimes referred to as The Battle of a Thousand Slain, holds the highest casualty rate of any battle in the history of the U.S. Army at 97 percent. Out of the 930 troops that began the fight, more than 630 died and 264 were wounded. The Western Confederacy lost 21 men and only 40 had injuries.

Embarrassed by the second loss, President Washington and Congress increased support for a larger, well-trained force called the Legion of the United States under the command of Major General (Mad) Anthony Wayne.

“Wayne was a decorated Major General in the American Revolution and later a U.S. Representative for Georgia. His nickname ‘Mad’ has mixed interpretations,” Norton explained. “He was known as a strict military disciplinarian as well as being extremely emotional and impulsive.”

Due to Wayne’s experience in war, President Washington appointed him to lead U.S. troops against the Western Confederacy.

“As a seasoned veteran trained in military protocol and tactics, Wayne diligently trained his troops rather than relying on loosely regimented militia and civilian volunteers,” Norton said. “Natives called him Black Snake, thinking he had supernatural powers. They believed he was like the black snake and never slept, making it impossible to ambush him.”

“The area had recently been hit by a tornado, and Native forces chose the cover of felled and damaged trees, hence the name Fallen Timbers, to set their ambush,” Norton explained.

Shawnee Chief Waweyapiersenwaw (Blue Jacket) and Lenape Chief Buckongahelas, along with a reluctant Miami leader Little Turtle, directed 1,400 Shawnee, Miami, Lenape, Wyandot, Iroquois, Ojibwe, Odawa and Potawatomi warriors into combat. Little Turtle desired peace, and after a scouting mission, he worried that the Native soldiers could not successfully overtake the Legion of the United States.

“A small number of British regulars and loyalist allied with the Natives,” Norton said. “The battle lasted a little over an hour with U.S. forces overrunning and outflanking the Western Confederacy. Most of the Native force that survived retreated to the British Fort Miami, yet were denied entrance by the fort’s commander Major William Campbell.”

Major Campbell did not have the resources needed to defend against an American attack, and unbeknownst to the Western Confederacy, the U.S. and England had began holding peace discussions.

The treaty required tribes to relinquish land south and east of the Greenville Line, which served as a boundary between Native lands and those open for U.S. settlement.

“Several tribes, including the Potawatomi, ceded nearly 2/3 of Ohio, parts of SE Indiana, sections within established tribal lands that were important transportation/trade routes and hubs including Fort Detroit, Fort Michilimackinac and lands for the establishment of Fort Dearborn (Chicago), to name a small few,” Norton said.

Both the Native Americans and white settlers disregarded the treaty, and violence surrounding land ownership and rights continued.

“The treaty’s terms were not balanced because the Confederacy lost, and too much access was provided to non-Natives,” Norton said. “Illegal settlement continued, and border conflicts began.”

The Treaty of Greenville opened the door for the U.S. to continue seeking lands around the Great Lakes region, helping lay the foundation for Indian policy to come, including removal.

Learn more about this era in Potawatomi history in the Cultural Heritage Center’s galleries Defenders of the Northwest and Treaties: Words & Leaders That Shaped Our Nation. 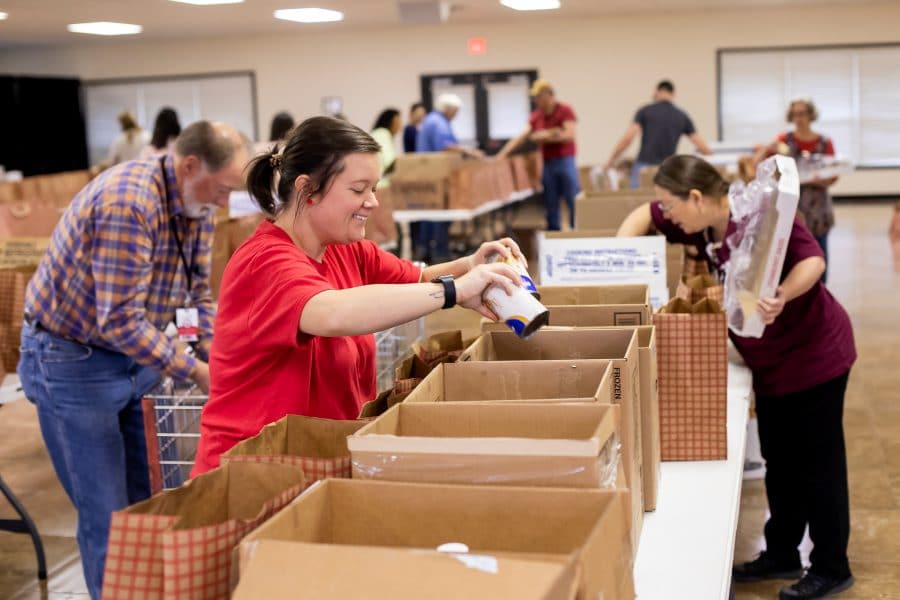