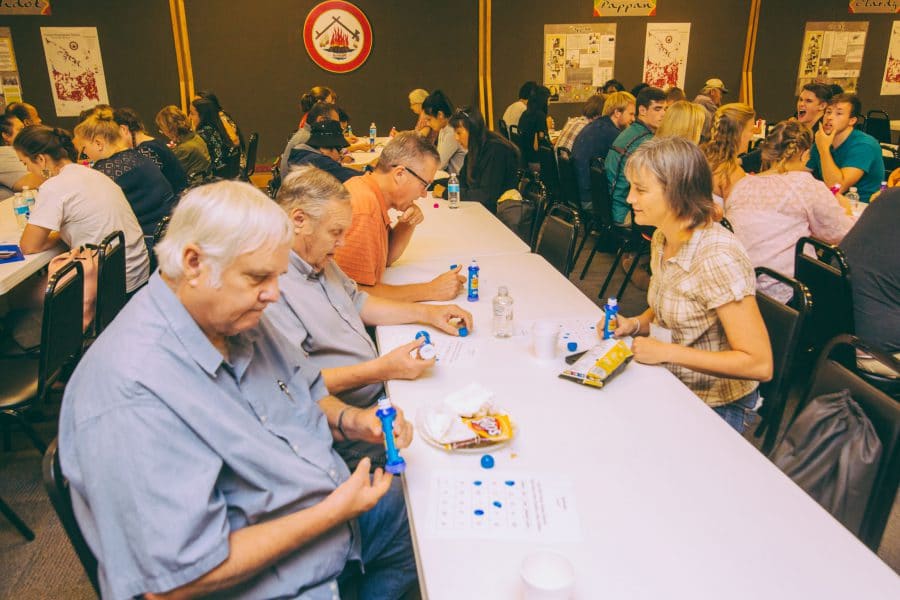 Marean is a Tescier family descendant and studied to become a Spanish teacher, but a linguistics 101 course influenced her trajectory. She double majored in Spanish and linguistics at the University of Kansas and taught upon graduation. After five years in the classroom, she came to a realization.

“I got restless and felt like the Spanish language is not in danger of dying out,” Marean said. “I wanted to do something more meaningful, even though I enjoyed teaching. I decided to go back to grad school, study linguistics and possibly work on Potawatomi, maybe a different Indigenous language.”

She learned about the Potawatomi Language Scholars’ College at Haskell Indian Nations University while reading the Hownikan. Although it was the third and final year of the program, Marean decided to attend.

“It just happened to be that summer before I started graduate school,” she said. “I had never heard the Potawatomi language before, and the only Potawatomi I knew were my extended family.”

Marean spent several weeks around Lawrence, Kansas, that summer immersed in the language.

“This was in the late ‘90s, and there were still quite a few first language, fluent speakers,” Marean recalled. “I had never been around Potawatomi who had grown up fully knowing and living the language, culture and tradition. I felt like I had walked into this other world.”

“I knew I wanted to go to graduate school and work on an Indigenous language to revitalize,” she said. “I then knew Potawatomi was a fit, which was awesome because that’s my own ancestry.”

Because of this, Marean began building rapport with Potawatomi across North America.

After completing her graduate degree from the University of Oregon in 2004, she worked as a curriculum consultant for a consortium of six Indigenous communities across California. Two years later, Marean got engaged and decided to move back to Eugene, Oregon. During the summer before her wedding, she looked for opportunities to learn Potawatomi.

One of her mentors at the Prairie Band Potawatomi Nation encouraged her to come back to Kansas.

“She had always said, ‘Well, you’re not going to learn Potawatomi living in Oregon. If you are serious about this, you need to come out to Potawatomi country,” Marean recalled.

The Prairie Band developed a Potawatomi grammar book in 2006. Unfortunately, the original linguist left the project before its completion.

“They had this almost finalized draft of the grammar book, and they needed to do one more run, so I showed up and stayed here all summer to help them with the final pass through,” Marean explained.

CPN member and distant relative to Marean, Leo Nadeau, assisted her and the Prairie Band’s language department with the book.

“I didn’t get paid, but it was an amazing experience for me — getting to interact with (elders) was awesome, and just the rest of the language department, they made me feel like one of them,” she said.

During summer 2006, the Prairie Band’s language department also partnered with Bay Mills Community College in Michigan to bring language educators once a month to teach Nishnaabemwin, an Ottawa and Eastern Ojibway dialect that’s similar to Potawatomi.

“Two or three instructors would come down for a long weekend, and those instructors spoke nothing except Nishnaabemwin,” Marean said.

“They’d stop by McDonald’s on the way back to (the Prairie Band), and they would have whoever picked them up from the airport look at the menu and tell them in Nishnaabemwin, ‘I want a hamburger,’ and they’d have to figure it out. We never heard English from those instructors.”

While visiting upper Michigan years later, Marean went into a convenience store where she ran into one of the Bay Mills Community College teachers.

“She asked me in Nishnaabemwin, ’Where are you going? Do you know how to get there?’” Marean recounted. “Since I didn’t, she switched over to English to give me the instructions to make sure I wasn’t going to get lost. It was the first time I’d ever heard her speak English.”

Marean fondly remembers her summer with the Prairie Band for further motivating her efforts to protect at-risk Indigenous languages.

Inspired to continue learning, Marean researched potential grants and financial assistance. Fellow CPN member Justin Neely received support from the Endangered Language Fund years prior, which allowed him to spend time with Potawatomi communities and become fluent with the language. Today, he serves as the CPN Language Department director.

“Knowing that he had done it gave me the confidence to apply myself,” Marean said. “I got the funding. It was matching funds, which meant I had the funding to go, but it meant I had to come up with the other out of pocket.”

“Each weekend, it would be one of those three locations,” she explained. “I would fly to one of those communities, spend the three days of the weekend doing immersion, then I would drive out to Forest County and hang out there and attend Forest County community classes.”

There she formed a relationship with Forest County Potawatomi elder and fluent speaker Jim Thunder.

“He knew I had driven out there, so he would find time here and there during the week to get together, and he’d teach me,” she said.

To take full advantage of this opportunity, she found ways to stretch every dollar.

“I was gone from home all the time, sleeping on planes, had no money, and I couldn’t work much because I was spending over a week each month doing this program,” she said. “I would deliberately buy red-eye flights so that I could sleep on the plane, and I wouldn’t have to stay in a hotel,” she said.

Although Marean considers this time in her life as “threadbare living,” she regrets nothing.

“Potawatomi and Odawa are different but similar enough that by learning Odawa, I started to get a better understanding of Potawatomi,” Marean said. “And meeting with Jim in between helped me separate the two.”

Her prior trips to the Great Lakes region and efforts to build relationships with the Potawatomi communities started coming to fruition when she received an invitation to help the Forest County Potawatomi language department complete a project.

Forest County’s linguist Laura Welcher initially worked with numerous first language speakers including the late Mary Daniels to create a Potawatomi dictionary, but Welcher required additional resources and manpower to complete it. The National Science Foundation and the National Endowment for the Humanities provided funding to conduct the research, fieldwork and data entry necessary to publish the dictionary.

“Monica Macaulay, a linguistics professor at the University of Wisconsin, was the principal investigator — the person in whose name we got the grant and who was responsible for carrying it out — along with Laura,” Marean said.

“It ended up being a collaboration between Forest County and the University of Wisconsin, but Jim especially wanted me involved because I have the linguistics background,” Marean said. “My dream was to learn linguistics so that I can work on Potawatomi and be a part of Potawatomi language revitalization — then it got real, and it was awesome.”

The dollars from NSF and NEH that helped fund the dictionary fortunately also covered her travel expenses.

“I went from sleeping in Greyhound bus stations to all of the sudden, I could pick flights so that I could sleep at night in beds and stay in hotels and have money to eat. I was paid to travel to Wisconsin and learn from my elders,” Marean said with a smile.

The team prepared potential word lists and entries, and then they worked with fluent speakers to ensure accuracy.

“We’d spend hours every day asking how to say stuff in Potawatomi,” she said. “That’s a rare opportunity for any Potawatomi person. I mean, we’re lucky if we get like 15 minutes with an elder.”

“I think since we already had Laura’s database, we thought that all we have to do is just check those and some other things,” Marean said. “It turned out, we had to check a lot more than we thought, and it took a lot longer than we thought.”

The group enjoyed working with each other so much that they decided to apply for a second grant and continue their work preserving their ancestors’ tongue.

“A big component of it was recording first language speakers up in Forest County speaking Potawatomi. As much as we could, we tried to put them together talking back and forth,” she said. “A lot of times because of schedules and because of the many other demands on elders’ time, it would just be one person talking.”

Mareans said she was fortunate to have met and worked with Forest County elder Lillian Rice. She enjoyed hearing Lillian Rice and Mary Jane Thunder discuss traditional foods, plants and stories in Potawatomi.

The venture lasted another three years, but during that time, Lillian walked on. This made capturing conversations amongst first language speakers even more significant.

For her most recent project, Marean recorded Forest County elders Jim and Mary Jane Thunder as they retold oral traditions and history, and transcribed the accounts into a book sold by Forest County.

Marean attributes her language preservation efforts to the relationships and connections she formed early in her career.

“I feel super lucky because I am ignorant about Potawatomi traditions and language and all of that,” she said. “I’ve been really, really lucky to meet good guides and helpers along the way, to get to spend time with some awesome elders.”

Today Marean works at the Center for Applied Second Language Studies at the University of Oregon and as a part-time practical linguist for the Tübatulabal Indigenous community through Owens Valley Career Development Center in California.

“I work on different projects intended to improve teaching and learning of all languages throughout the United States,” she said. “It may be sort of unrelated to Potawatomi work, but it’s still helpful.”

Marean encourages those who want to learn the words spoken by their ancestors to start now.

“It’s so worth studying Potawatomi. It goes beyond the language itself,” she said. “For some people, learning a language is kind of like learning another fun code, but there’s way more to that in Potawatomi — you’re learning about your ancestral worldview when you study Potawatomi. No matter how hard it is, go for it.”