Roll of the dice now available in Oklahoma tribal casinos

Crossroads Academy – Central Street focuses on producing culturally literate scholars from its diverse student body by looking at every aspect of a child’s education through an equity lens and working hard to create an anti-racist school staff and community. This means examining school curriculum, particularly social studies, through different perspectives.

Fourth grade students have been learning about pre-1800s American history through the lens of Natives, women and slaves. This has been interesting, as these little scholars have typically learned the Eurocentric version of history. They’ve discussed how the tension between the settlers and Indigenous peoples began and caused Natives to fight on the side of the British during the Revolutionary War. Although many did not want to choose a side at all, they were forced, and that led to the Indian Removal Act of 1830 and continued tensions.

We recently took a field trip to the Nelson-Atkins Museum of Art in Kansas City, Missouri, and explored a few exhibits from the 1800s through the 1950s. One exhibit in particular focused on Westward Expansion. Our scholars were able to make great connections due to our studies of the Indian Removal Act and the settler/Native tensions.

For example, a sculpture called The End of the Trail depicted a Native man on a horse slumped over with a spear under his arm. Several scholars thought he might have been killed with a spear. Upon further investigation of the sculpture and the context clues given by the title, they determined he was probably slumped over as a sign of exhaustion and despair after traveling along one of the two specific Indian Removal Act trails they studied — the Trail of Tears and Trail of Death. 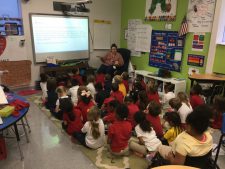 In addition, the kindergarten class asked me to share about Potawatomi history and culture as well as the Trail of Death. The children learned a couple of Potawatomi greetings, a Potawatomi song and made ribbon vests.

They sang Mary Had a Little Lamb in Potawatomi, which was chosen for its repetition. They sing the alphabet to the tune of Mary Had a Little Lamb during their Pathways to Reading program. Some items covered in the presentation included the history of the Tribe; the roles of men, women and children; Potawatomi and French relations; and food, toys and clothing.

They picked up Potawatomi greetings such as “bozho (hello),” “nikan (friend),” “mno gishget (good day)” and more. We also watched a video CPN Language Department Director Justin Neely put together discussing the book Why Bear Has a Short Tail based on a traditional Potawatomi story.

We did discuss the Trail of Death in some degree while we were learning about how the Tribe moved to Oklahoma, which made one scholar emotional. It opened up a nice discussion about why Thanksgiving is often considered the National Day of Mourning for many Natives. The children wrapped up their session making ribbon vests out of ribbons and a paper bag.

Find out more about Crossroads Charter Schools at cpn.news/crossroads. Read more about the Trail of Death at cpn.news/trailofdeath, and learn about the Potawatomi language at potawatomi.org/language.