Jett named as one of Oklahoma’s most admired CEOs 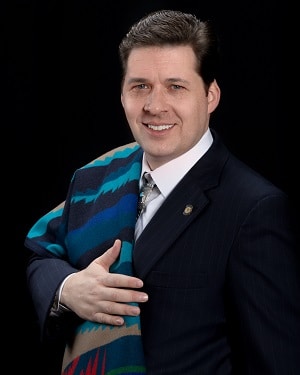 The Journal Record recently honored Shane Jett as one of the state’s most admired CEOs. The Citizen Potawatomi Community Development Corporation director was one of only four honorees to be recognized in the nonprofit category.

“It’s incredibly rewarding to be recognized with so many other fine leaders of Oklahoma organizations,” said Jett. “I think this honor reflects the work of my great staff and the support we’ve been given by the Citizen Potawatomi Nation tribal leadership.”

“This year’s Oklahoma’s Most Admired CEOs event honors another group of leaders who exemplify strong integrity, leadership, vision and community involvement,” said Ted Streuli, editor and associate publisher of The Journal Record. “It is important that we recognize these leaders for their contributions to Oklahoma’s business community and quality of life.”

Jett was named director of the CPCDC in 2011 and has led its transformation into the country’s largest tribally-owned Community Development Financial Institution. When he began, the CPCDC’s revolving loan fund had $14 million under management whereas today it has more than $65 million.

In 2016, his team brought $47million in new money to CPCDC, more than all the combined funds raised since the organization’s inception in 2003. They alone, out of 70 Native CDFIs, were included in the United States Treasury Guarantee Bond Program, securing an allocation of $16 million. The CPCDC concluded the year with another $25 million in funding from USDA’s Rural Development Community Facilities relending program.

That success has translated into impressive growth for the organization dedicated to developing small and medium sized Native American-owned businesses. The CPCDC’s revenue growth in the past 12 months was 149 percent, while the net income growth over the same time was 345 percent.

Jett credited much of the success to his hands off approach managing the CPCDC’s small staff of financial and administrative professionals housed in their offices at First National Bank & Trust Co. in Shawnee, Oklahoma.

“If you take care of your people, your people will take care of you,” said Jett. He believes his approach is reflected in the tight knit and successful staff. During his tenure, they have grown the organization by impressive margins.

He is also lieutenant in the U.S. Naval Reserve and a former legislator at the Oklahoma statehouse where he represented southern Pottawatomie County’s House District 27 from 2004-2010. He has three daughters with his wife Ana.