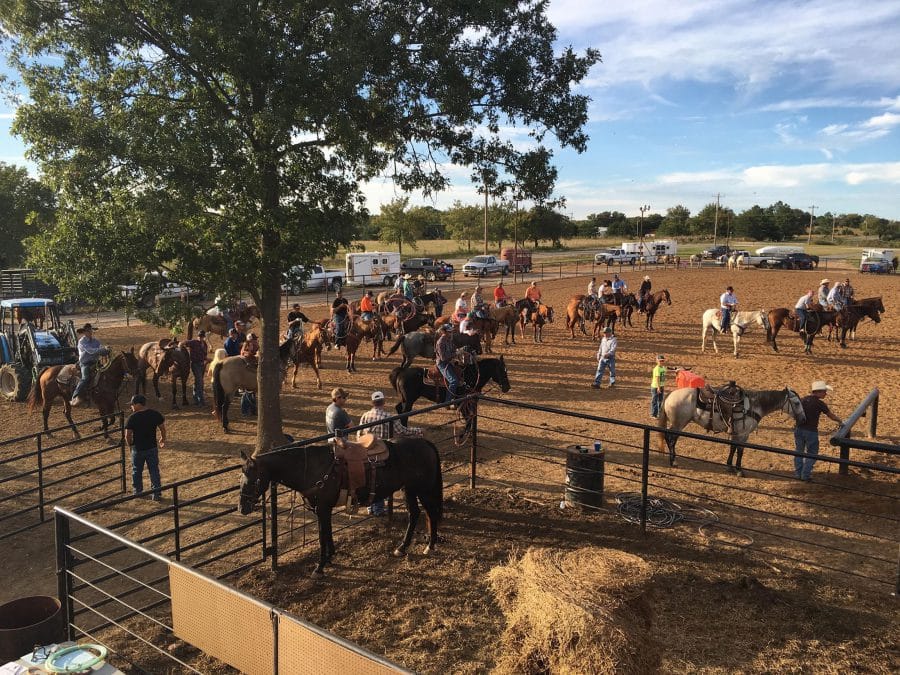 Turning left while stepping outside the Jesses’ front door means looking directly at the J Bar Arena. Tribal member Michelle Jesse and her family opened the permanent structure complete with cattle, a concession stand and room for trailers in Konawa, Oklahoma, in 2014. The DeLonais family descendants decided the arena’s location rested most conveniently right at home.

Their experience hosting events began as a single, annual memorial event for friends and family and quickly turned into owning a gathering place with sought-out contests. Operating an arena and owning cattle requires a significant amount of extra effort in addition to their regular employment.

Michelle is a commissioned officer with the United States Public Health Service working for Indian Health Service. Her husband, Todd, is a welder, horse trainer and Muscogee Creek Nation tribal member. His history riding bulls and participating in rodeo competitions began decades ago.

In 2006, the Jesses began holding events on Todd’s father’s property, Seminole Nation of Oklahoma tribal member Dale Jesse. After he sold it in 2009, they continued what they started and moved the site to their acreage. They set up a temporary pen, and it evolved into a permanent location about five years later. While planning the construction, Michelle and Todd considered the type of environment they wanted to create and amenities they wanted to offer.

“We just thought about what we liked about roping events we had been to in the past … and tried to create that atmosphere for ropers and their families because it is a family sport,” Michelle said.

“You just want to give them the opportunity to be able to all go to the same place and compete and feel comfortable.”

They decided to include concessions after Michelle remembered being at roping events with Todd and hungry, little children with no food available.

“You’re like, ‘Oh my gosh, it’s not easy to unhook a trailer and run to town.’ So, you had to be prepared,” Michelle said.

In 2016, highway construction near their land forced them to move the entire arena over 28 feet, making it the third construction project on their property. They contemplated not rebuilding but concluded it would be worth it.

“No words can describe how it feels to watch your kids do what they love,” they both said. “Having the arena at the house has allowed us to watch Colten (their son) rope and train his own horses and watch Jaden (their daughter) train her barrel horse as well as learn to rope.”

All in the family

Jaden began participating in barrel racing at junior rodeos when she was 5 and training her own barrel horse when she was 14. She started competing again in barrel racing at 15, quickly winning a barrel-racing buckle. Colten is a 21-year-old professional bull rider on tour with the PBR. He learned the sport from Todd and began riding sheep when he was 4 years old.

“Having an arena at the house was a total blessing,” Colten said. “Team roping, riding horses and bulls all just ties in together. It’s a part of the cowboy lifestyle, and I’m fortunate enough to live it every day.”

Saying rodeo competitions run in the family is a bit of an understatement. Michelle gives her family her undivided support.

“I ride occasionally but not very often. I’m just a really good cheerleader,” she said and laughed.

Each of the Jesses hold some responsibility in running the arena. Michelle enters all the contestants into their computer registration system, and her mom, CPN tribal member Kathy Lowry, helps in the entry office. Michelle announces the events over the intercom. However, Michelle dislikes the attention the microphone brings.

“I get really nervous. … I’ve just been to enough ropings that I know that if you announce them loud enough over the intercom and kind of pay attention to the flagger, then you can run a roping pretty quick,” she said.

Todd serves as a field judge, or flagger, during the events and cares for the cattle, and his father helps. Jaden runs the concession stand. Other friends offer to play a part in running competitions as well, which turns them into a community effort.

2018 marked the 13th anniversary of the Marty Wilson & Tim Lowry Memorial Roping, and it is still their biggest event every year. The memorial roping fills an entire weekend, including a dinner for the ropers and their families, a live band and fellowship. Many of the ropers bring their trailers and stay the night, making it an annual tradition.

Three years ago, they decided to expand their schedule and hold both jackpot and regular team ropings after encouragement from competitors.

“We went ahead and started trying to do it on a more routine basis because we were getting so many people that were like, ‘You guys put on such good events, why don’t y’all start having a regular jackpot?’” Michelle said.

Since then, The J Bar Arena’s popularity soared. They have held events where they fed more than 150 people and registered over 200 teams. One year, they welcomed contestants for over 30 individual ropings — that is one about every 12 days.

“I’d say (there are) 20 or 30 ropers that just live in a pretty close proximity that just continuously ask, ‘When are you all going to have another one?’” Michelle said.

The special events are still the family’s favorites. Besides the memorial, they have sponsored a benefit roping for the Maud Round-up Club and celebrated Colten’s birthday with the annual Bullriders Only Roping. They also sponsored a roping fundraiser for a young Native bull rider hurt during competition.

“Those are the ones that we enjoy the most, the events that at the end of the day, we’re able to help someone in need. Anyone that knows us, knows we’re very giving people … and Todd and I both agree — to see a smile on somebody’s face and know that you did something to help them through a tough time is gratifying,” Michelle said.

The arena plans to focus on special events in 2019, likely opening sometime in the spring and running into the fall. Find out more about J Bar Arena by visiting cpn.news/JBarFB.