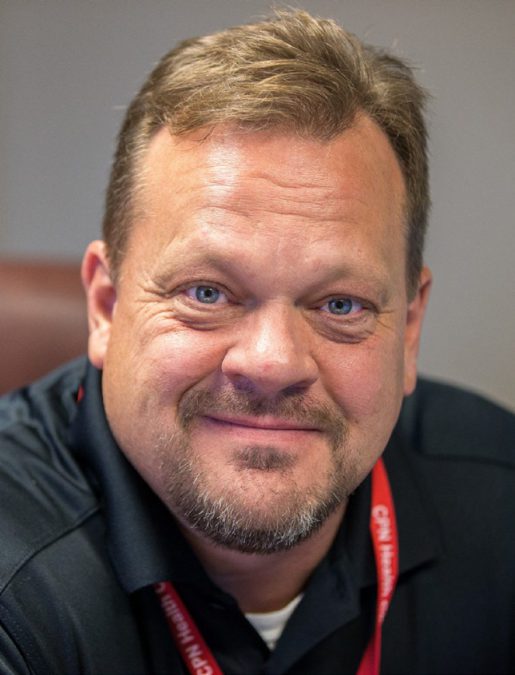 Cleveland was born in Tishomingo, Oklahoma to a family that moved fairly regularly due to his father’s work as an administrator and president of junior colleges across
the U.S.

“I am an Okie, but I call Louisiana my home,” he said.

A testament to his father’s profession, Cleveland said education was always a prime focus in his family. His father’s job as a professor at Louisiana State University at Alexandria is what brought them there, and that is where he grew up.

His roots in Pottawatomie County, Oklahoma were also nurtured from a young age. At 15, Cleveland and his brother were in a severe car wreck that left the latter paralyzed. He had just opened a drug store in Meeker. Cleveland’s parents promptly retired and moved to Oklahoma to help his brother manage the business that he had taken up right out of the University of Oklahoma’s College of Pharmacy. During summer months, Cleveland traveled to Meeker and worked in his brother’s pharmacy, which he thought put him on the path to eventually taking it over after he graduated from college.

Cleveland stayed in Louisiana and graduated high school there, then took some time in finding the correct path for him in higher education.

“One thing you didn’t do in my family, coming from a dad who was a college president with two Ph.D.’s, was not take school seriously. I just didn’t study, so I took six years on a four-year plan,” Cleveland recalled with a laugh.

He eventually graduated from Northeast Louisiana University with a bachelor’s degree in occupational therapy after realizing that while chemistry was a subject necessary for a pharmacist, it was not one that he excelled in.

“The grace of God (drew me to that),” he said. “My dad had told me he wasn’t paying for me to flunk out of school and was bringing me back from college, so I went to the chapel, said a couple prayers and walked to the office to transfer and heard of this occupational therapy major that I could take because I had a bunch of science courses already.”

He asked his father for one last chance — a final semester to prove he could do it.

“Anatomy made sense to me,” he said. “My grades turned around and it was something I was interested in.”

Post-graduation, he embarked on a career as a hand therapist, working in Louisiana and Arkansas for more than a decade. Yet in in July 2001, after his mother passed away from Alzheimer’s disease, Cleveland moved to Meeker, Oklahoma with his wife and children. He took a position as staff occupational therapist with the hospital in Shawnee, then called Unity.

After more than two decades as a hand therapist, Cleveland sought a change in his career while staying in the health sector. With the help of Saint Anthony’s, which by that time owned Shawnee’s hospital, he went back to East Central University and completed a master’s degree in human resources administration.

“It was a new challenge, I was ready for something else,” he said. “I had seen how administration makes decisions that affect doctors, nurses, receptionists and patients, and I wanted to be a part of that.”

As a former staff member, he said he wanted to use his experiences as a health care provider to help make some of the decisions. Cleveland described his preference for administration to focus on patients first, and then revenues and business second. In fact, it was just such a focus that brought him to Citizen Potawatomi Nation in 2017 after his time as an associate director of physician operations at St. Anthony’s.

While all health care clinics and practices must make a profit to remain effective, Cleveland said that the tribal health care services’ focus on providers having time to actually know their patients is important to him. He compared the packed schedule that doctors in private practices navigate daily.

“Doctors in the city are getting patients in, three, every five minutes, because they make money in terms of the quality of care but also the number of patients they see,” he said. “Here (at CPN), the doctors see a patient every 15 to 30 minutes, but that’s it.”

Cleveland cautioned that the comparison isn’t meant to paint doctors as “money hungry; that’s not it.”

Rather, as an admittedly patient-centric former health care provider, he just prefers the system that CPN offers. He believes many of the providers working at the clinic he now manages would agree.

“It’s good to get to know your patients and have that personal satisfaction that you’re helping them.”

He said the decision-making process at CPN, which typically involves a consultation with health services director Chris Skillings and tribal leadership, is demonstrably faster than his experience in the corporate health care sector.

“The corporate world is just that. They’re there to make money and answer to their shareholders, and that’s okay, but I just like the idea of patient care,” Cleveland said. “Our network is closed in a way, in that we serve Native Americans and employees who live here in the community. We get to know these people and I am getting to see these people we have relationships with each day. I like that.”

To learn more about the offerings of CPN Health Services, please visit potawatomi.org/services/health or call 405-878-4693.