Citizen Potawatomi Nation tribal member and dancer J. Davis Hobdy began lessons at 7 years old in Irving, Texas, and performed professionally for the first time at age 13. Over the next three decades, dance became second nature. It felt like work but never like a job.

“Honestly, I don’t know what I would do if I wasn’t dancing,” Hobdy said. “I really did not realize until I’d been teaching for over two decades, ‘Oh, hey! Dance is what I’m doing with my life.’”

He is the school director and owner of County Dance Conservatory in West River, Maryland, which offers an outreach program through agreements with Episcopal churches. Students choose among ballet, modern, adult stretch — a combination of jazz, Pilates and ballet — and other classes.

“I love teaching ballet. I love performing jazz and tap, but I prefer to choreograph modern,” he said. “You learn so many different things from the different styles of dance.”

He obtained his Bachelor of Arts degree in 2016 through St. Mary’s College’s Liberal Education for Arts Professionals program. Hobdy continued his education, graduating in July 2018 with his Master of Arts in professional practice, dance technique pedagogy from Middlesex University in London, England.

The long distance, online program allowed him to complete credits and hold class simultaneously. The other students he communicated with via Skype hailed from Canada, Australia, New Zealand, Saudi Arabia, Dubai, Hungary, Belgium and Norway.

Hobdy wants to keep teaching in a classroom setting at a higher education institution. Most colleges and universities require professors hold a terminal degree — in his case, a doctorate. Hobdy plans to consider his options and extend his masters’ research into a doctoral program.

To complete his master’s degree, Hobdy submitted a project exploring the connection between dance and mental awareness by comparing two sets of adult populations. The study focused on the art form’s emotional and psychological effects. Hobdy taught people in person and utilized online platforms to interview 22 people from around the world, several of whom spoke English as a second language.

Hobdy built the first group from County Dance Conservatory students. They took classes created to combat aging and memory loss and to improve movement, balance and flexibility. They ranged in age from 51 to 84. Hobdy observed them for five weeks while instructing class and interviewing them about their experience. 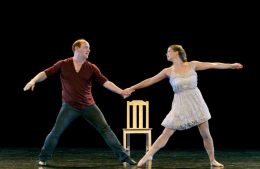 The second population included professional dancers from around the world seeking new career goals through education. Overall, this group was younger than the first group, although there were a few subjects in their 50s and 60s. According to Hobdy, the dance community views performers as “old” as early as 30 due to the art form’s intense physical requirements.

Members of both groups experienced physical limitations due to either injuries, age or the effects of long-term medical conditions.

“Those were relevant because those may have been things that encouraged experienced dancers to think about having a degree and transitioning to another career,” Hobdy said. “It also played heavily with the older adults trying to go back to dance because they thought dance might be less stressful” physically than some other forms of exercise.

At the end of the five weeks, Hobdy recorded the first group performing a routine set to a reading of Alzheimer’s Poem: Do Not Ask Me to Remember by Owen Darnell in seven different languages.

“We do ballet and modern phrases that have been modified to be taught in a chair so that these adults don’t have to worry about balance,” Hobdy said. “Because the piece was not done to music, it was done to voice, they had a challenge with it.”

Narrators read the poem in Japanese, German, Czech, Farsi, Spanish, French and English, the languages spoken by the project’s participants. Hobdy said he wanted to express then essential role translation and interpretation played while highlighting the students’ cognitive abilities and language skills within the classroom.

Both groups experienced positive and negative emotions while participating.

“They were starting a new part of their life journey. There was some happiness that, ‘OK, I’m trying something new. This is exciting,’” Hobdy said. “But
fear and anxiety were really prevalent in both groups, and playing with that, they needed interpersonal communication and support.”

Participants from both sections preferred face-to-face interaction with instructors and the opportunity to ask questions, receive feedback and frequently communicate, as opposed to instruction through a third party or device. The first group repeatedly asked Hobdy to explain a technique and pattern of movement after he attempted to show them a YouTube video covering the same material.

One emotion, in particular, stood out with the former professional dancers — the grief of closing an important, cherished chapter of their lives.

“Even though they were learning something new, and their mind and their bodies may have helped them do something they didn’t think they could do, at the same time, they realized just what they were unable to do and what they might not be able to ever do again,” he said.

“If you started dance at the age of four and you’re 40 years old or 50 years old, and you’re getting a degree so that you can leave something you’ve been doing for 30 to almost 50 years, there’s a sense of loss whether they acknowledge it or not.”

Dance connects cultural gaps for Hobdy, and his research proved it elicits universal emotions. Interviewing and dancing with people from across the world throughout his career showed him once again the human experience transcends time zones, language, race and technical ability.

“It has been a wonderful journey,” he said.