Fun, fitness for the whole family

CPN and you — help kick the flu

IT specialist Greg Watson serves country while serving the Nation

Greg Watson’s passion is connecting with people. Before becoming an information technology specialist with Citizen Potawatomi Nation in 2014, he served vital IT functions in the United States Army.

Raised in Shawnee, Oklahoma, he joined the military in his late 20s. He has been on the move ever since, working in far-flung cities, states and nations until leaving active duty and joining the National Guard.

He worked in Korea, Texas, North Carolina and Virginia throughout his time in the military, and today, he spends one weekend per month as a National Guard avionics mechanic in Tulsa.

His day job, however, connects him to an entire Nation.

“I was looking for a job when I got out of active duty. I wanted to work for the Nation, and the only job open was for housekeeping, so I applied,” he said, then laughed. “After the interview, she said, ‘Well, you’re pretty much overqualified.’” 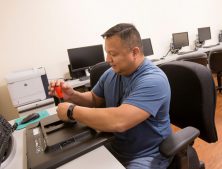 Greg Watson works on computers at the Workforce Development & Social Services building during his work for CPN’s Information Technology department.

Undaunted, he eventually connected with CPN’s IT infrastructure supervisor. Soon, he was helping co-workers maintain the Tribe’s network infrastructure as an information technology specialist.

Watson’s work in CPN’s Information Technology department means he serves hundreds of employees in about two dozen areas, installing computers, software and printers as well as accessing networks and databases. He helps teach employees to use these tools and troubleshoots when there is a problem.

“We get to travel everywhere and go all those places, getting out of the office and helping everyone. You get to meet everybody,” he said. “I like it here. Man, do I like it here.

“I love the Cultural Heritage Center; there are some good people over there. I always learn something every time I go over there,” he said. “Everywhere I go, I love listening to people talk and telling me their stories.”

Watson, an Absentee Shawnee tribal member, grew up in Shawnee. He joined the military at age 28.

“I wanted to join out of high school, but my mom didn’t want to risk losing her only son,” Watson said. The decision finally made, “Once I got in there, everything was great.”

In 2008, he started in North Carolina with Fort Bragg’s artillery unit. His duties included everything from computer, program and printer installation to establishing user accounts for battalion-level commanders, sergeants, lieutenants and certain first-class and approved soldiers.

“I worked on computers,” he said. “Pretty much what I do here is what I did for the military for six years, but now I can do more of the user access.”

During active duty in Yongsan base in Seoul, South Korea, in 2011, he monitored the missile warning system, twice reporting suspicious North Korean activity.

“Thankfully, the rocket fell apart over the ocean,” he said.

“My next station was at Fort Bliss in El Paso, Texas, right across the river from Juarez,” he said, where he again performed information technology-related duties before leaving active duty in late 2013.

Reconnecting
In 2014, he joined the National Guard.

“As soon as I got out of active duty, I went to the National Guard as a medic,” he said.

“I wanted to be a medic because, at my first duty station, I really liked those medics. They were smart, and they had a lot of training — a lot of them were also training to become medics and physician assistants,” he said.

“Their clinicals were there, and there were hospitals there. I was like, ‘I do want to help people,’ so when I re-enlisted, I decided I could do that on the civilian side in the National Guard.”

He injured his right knee during training, limiting his ability to help patients in the field. He switched gears, recently returning from Virginia’s Fort Eustis, where he trained for six months.

“I just got back from school to become the avionics mechanic,” he said. “I was trained to work on Black Hawks and Chinooks,” which are military utilityand heavy-lift helicopters.