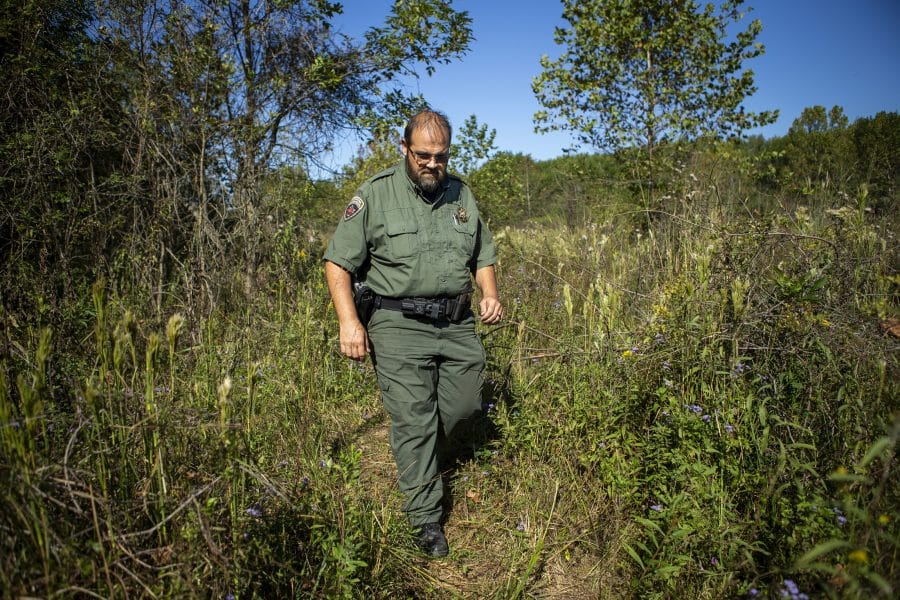 Due to the destructive behavior of wild boar — accounting for more than $1.5 to $2.5 billion in agricultural-related damages annually — the United States Department of Agriculture defines it as an invasive species. Three miles east and 3 miles south of Asher, Oklahoma, on the southern end of Citizen Potawatomi Nation’s jurisdiction sits a round, 15-feet-radius steel-crafted feral hog capturing device. The trap, overseen by CPN’s Department of Real Estate Services Conservation Law Enforcement Officer Eric Reed, assists population control efforts across the Nation.

“When you come across land the hogs have been on, it looks like a bomb has exploded,” Reed said.

Due to policies throughout CPN’s history in Oklahoma, like allotment, most of the Nation’s original jurisdiction is not owned by the Tribe. As original allotments become available, CPN’s Department of Real Estate Services tries to purchase the land. The Nation has reclaimed thousands of acres throughout Pottawatomie, Oklahoma and Cleveland counties since the 1970s.

With more than 20 years of law enforcement experience at CPN as a Tribal police officer and conservation officer, Reed is proud of his work to serve the greater community. As a citizen of the Cherokee Nation, he grew up learning the importance of respecting the land and its finite resources. Since childhood, he dreamed of becoming a game warden. When his current position at the Nation became available, he applied immediately.

As the Nation’s conservation officer, Reed checks on all CPN-owned land to ensure mineral extraction is not polluting the area and no poaching is occurring. He also regularly inspects the Nation’s feral hog trap and averages more than 100 miles per day driving to all the Nation’s properties.

Although hogs have called North America home for hundreds of years, they are not native to the continent and have no natural predators.

“If you go back in history, they came from Europe. They brought pigs over with them, and they just let them run loose,” Reed said. “It’s gradually grown up from there, and some was livestock or pigs getting loose.”

Swine have a relatively short reproduction cycle at only three months, three weeks and three days. With an average of one to 12 piglets per litter, managing feral hog populations can prove difficult. In the 1980s, the USDA estimates only 17 states had feral populations, whereas today, the species has expanded to at least 35 states.

“Ever see what an armadillo does to your yard? They make little, tiny holes that kind of have dirt up around it. Now imagine that armadillo being about 300 pounds,” Reed said.

Due to their keen sense of smell, hogs can recognize potential food sources up to 10 feet underground.

“They get down in and root the dirt, taking all the roots up, and they can do 20 acres in a night. And it can be anywhere from an inch deep to 4 to 5 feet deep,” he added.

Feral hogs also carry more than 30 diseases and 37 parasites that can infect other wild animals, humans and livestock.

“That’s why farmers hate them is because they can tear up crops so quickly, and because they poop and pee in the water, it contaminates the water and can make your animals and farm animals sick,” Reed said.

For the past several years, the Tribe’s realty department has set up a 15-foot-radius cage trapping system in southern Pottawatomie County. It includes 12 panels that bolt together, forming two circles to manage the feral hog population.

They are most active on CPN land from fall to early spring. Before the 2019-2020 season began, Reed set out cameras to determine the most advantageous location. The Department of Real Estate Services operates the battery-run device and cameras via a cellphone application, so finding a location with ample service is key to a successful season.

“Every time it gets a signal, it sends us a text message saying ‘motion detected on your camera,’ and you log into your account, pull up the camera feed, you can see what’s in the trap. It could be birds, turkeys; it could be deer, whatever activates that sensor,” Reed said.

Reed has a love-hate relationship with the technology that runs the trap. Since it operates through cellphone service, and because of the rural nature of southern Pottawatomie County, a delay sometimes happens between real-time and the digital feed. A few seconds can mean the difference between success and failure.

When feral hogs are active, Reed places corn in the center of the trap’s ring as bait. Its open design allows the swine to enter from any side of the circle. Once inside, Reed can choose to drop the outer ring and capture the wild hogs.

Reed hopes his work makes an impact on this invasive specie’s population across CPN’s jurisdiction. Stay up to date on the Department of Real Estate Services’ efforts to conserve and reclaim CPN land at cpn.news/dres.