Although many cultures across the globe give presents during the holidays, for Potawatomi, the practice spans all seasons. Native customs vary between small presents on a daily basis to larger exchanges during ceremonial gatherings and diplomatic meetings.

“Gift giving is one of those things that is often used to open lines of communication and to develop or sustain a friendly relationship,” said Citizen Potawatomi Nation Cultural Heritage Center Director Kelli Mosteller, Ph.D.

“As two tribes gathered together … there was an exchange of some kind of gift that is symbolic of one nation as a sign of friendship that goes back many, many thousands of years in human history,” she added.

Philanthropy not only opened doors and built rapport, it also dermined tribal standing. For many Native nations, individuals traditionally received their status based upon how much they redistribute to their people.

“For longer than we give our ancestors credit, there was a duality to what we meant by wealth,” Mosteller said. 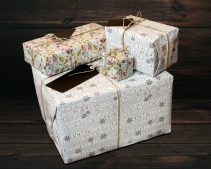 Before removal from the Great Lakes, the Potawatomi held ceremonies, meetings and councils in the warmer months to celebrate the prior year and exchange gifts. Although the Potawatomi give during periods of joy and happiness, they also conduct the practice as part of a traditional death ceremony.

“When someone passes, the job as the closest relatives of that person is to ask others to come in to help see through the things that need to be done to send them to the Western door,” Mosteller said. In return, the grieving family provides gifts for the services asked of the community.

The Potawatomi and other tribes brought presents to share during treaty negotiations, which sometimes the Europeans and U.S. officials did not understand.

“The piece of paper that was signed at the end was secondary to the real human exchange,” Mosteller said. “For the American politician and officials, it was the inverse.”

Even today when Potawatomi elected officials across the various Potawatomi nations meet, they exchange presents as a sign of friendship.

“It’s the same thing that we’ve been doing since long before European arrival,” Mosteller said. “We, as a very western materialistic culture, often wonder when we’re going to get the thing ‘we should be given,’ and that’s just not how we should look at it. We have to flip that script somehow.”

It’s a privilege to give, especially as a sign of thanks or to ask for help, she explained.

“When you ask someone to do something in a traditional manner, you offer that person tobacco,” said CPN Director of Language Justin Neely.

The physical exchange of tobacco cements a relationship between the giver and receiver. Before harvesting resources from nature, the Potawatomi pray and offer tobacco. This action thanks the plant for giving its life for others.

Providing food and beverages to visitors also has traditional, Potawatomi origins, but “You don’t do it to impress them,” Neely said. And as a guest, not accepting the hospitality offered is a sign of disrespect.

In an interview with CPN’s Language Department, Hannahville Indian Community tribal elder Vicki Dowd said sharing and being Native American are one in the same.

Neely expanded on her message and said, “Gifting is central to our way of life. It’s about connection and being thankful. We are supposed to take care of one another.”

“When you give in threes, the one receiving them completes the circle,” DeerInWater said.

Mosteller encourages celebrating this holiday season through reciprocity and spending time together learning a Potawatomi craft.

“Often it is the time, effort and love that is put into it that is much more precious than the actual item in the end,” Mosteller said. “That’s also how our traditions are going to stay alive.”

When someone grasps a new skill like beading or basketry, Neely said they should always give the first completed project away. However, participation in Potawatomi customs is not limited to crafts.

“Maybe the gift is sitting down together in front of the computer to listen to winter storytelling and learning those stories so that next year you can tell them without having to be on the computer,” Mosteller continued. “We need to back away from the idea of the expensive gift. Maybe the gift isn’t even a material thing at all — perhaps it is time spent together.”