The importance of strawberry basketry in Potawatomi culture 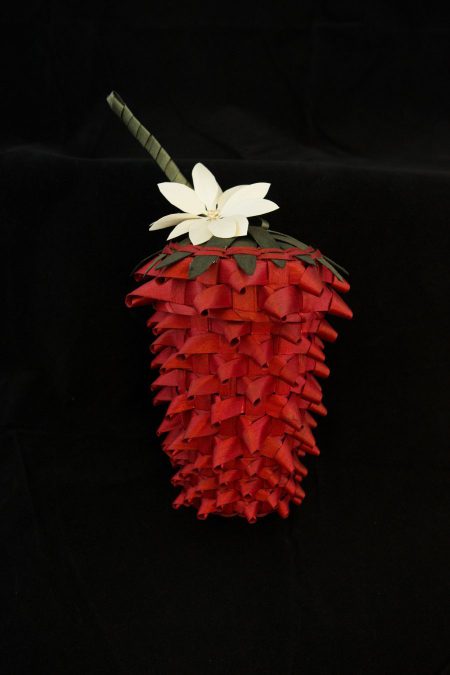 For thousands of years, the Nishnabe have made baskets out of black ash trees and porcupine quills. One of the most-used images in basketry is the strawberry because of the cultural significance of the fruit.

“The Potawatomi word for strawberry is demen, which is directly translated as ‘heart berry,’” said Citizen Potawatomi Nation Cultural Heritage Center Director Kelli Mosteller, who wore a shirt with a strawberry design during her interview with the Hownikan. “The teachings I have been told are that strawberries are a gift from the Creator. In the summer, our ancestors could step outside of their lodge, and this fruit that could take care of them would be growing.”

Mosteller said strawberries are used during monthly full moon ceremonies. The berry symbolizes womanhood and the transition into the role of caretaker. They are also beautiful and taste great, so it is no wonder that Nishnabe artists use this motif in a variety of art, including applique and beadwork.

“There are things that have a cultural relevance that people take the time to replicate in a decorative way,” Mosteller said. “You just don’t often create something just for the sake of it being beautiful; it has to have a deeper meaning to you or your community.”

Strawberry baskets are also used to show off the skill of the artist. They are complex to make because of the intricate detail. “It’s really an accomplishment to be an artist who can get to the level of making a really good strawberry basket,” she said.

Many Potawatomi artists create strawberry baskets using bark from the black ash tree. Black ash basketry is a regional art because the tree grows primarily around the Great Lakes.

“Like most things, black ash basketry started with a utilitarian purpose. We needed baskets to carry and store things,” Mosteller explained.

“As we moved into a trade era and people could go buy whatever storage container they wanted, it’s transitioned from utilitarian, where you would get a lot of things like pack baskets and store baskets, into more decorative baskets. Nishnabe artisans go through a lifetime of constantly honing the craft and skill to really become true artists, still harvesting the black ash in the traditional way.”

Historically, people would cut down a black ash tree using an ax and then harvest the strips of bark. It is important to find the right tree without too many knot holes. Each ring is a strip of the bark, so the basket maker must pound it to get the moisture between the rings to release “until it’s pulling off like string cheese,” Mosteller said. The more an artist pounds the bark, the sturdier the strips will be.

Today, some basket makers use synthetic dyes, but many still use traditional dyes. They harvest certain flowers and plants, dye the bark strips, and then weave them together to create the basket.

“I’ve often heard, ‘If being Indian was easy then everyone would do it.’ Doing things in the right way — the way you’ve been taught — is much more challenging, but important because it has much more meaning,” Mosteller said. “That’s why buying things that are labeled true Indian made and not buying things that are knockoffs and replicas is important. They are expensive, but they should be because people spend many, many hours working on these baskets.”

The Citizen Potawatomi Nation Cultural Heritage Center in Shawnee, Oklahoma, has many strawberry baskets in its collection made from porcupine quills and black ash. Mosteller has purchased a few like these for herself, most recently from artists at this year’s Gathering of Potawatomi Nations in Walpole Island, Ontario, Canada.

“The quill baskets we brought back from Walpole Island were made by a woman in Ontario. She passed away about three or four months ago. She was one of the very few who still worked in quill basketry,” she said. “A lot of these skills are dying off. Just like with our language a lot of these people who work in this art are dying, and younger generations are not picking it up. If we have the elders there and we aren’t using them as a resource, that’s on us.”

To learn more about traditional baskets in the CHC’s collection or to purchase a handmade basket from the Citizen Potawatomi Gift Shop, visit potawatomiheritage.org or call 405-878-5830.