Sexual assault: The time for change is now 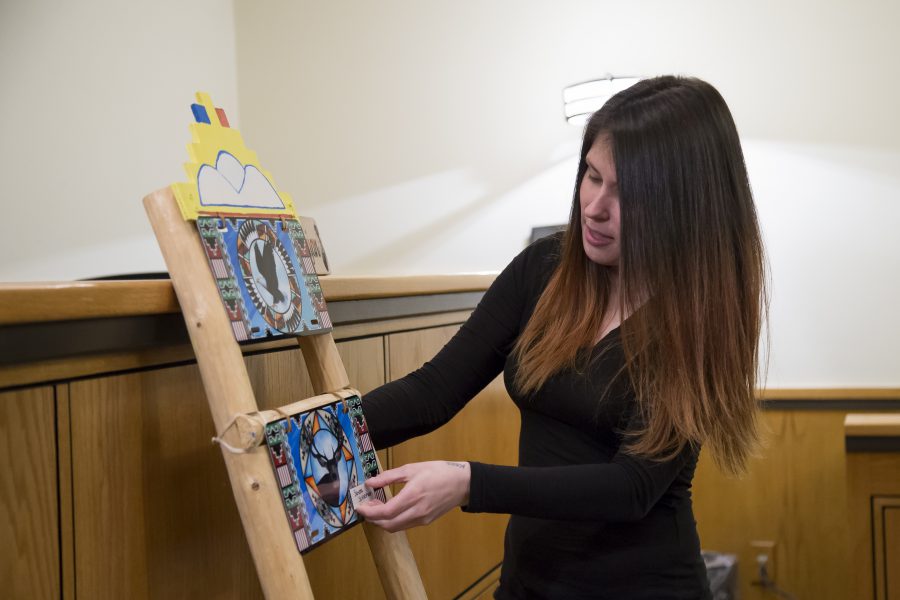 The 15-month Healing to Wellness Court is open to CPN tribal members, their children and Natives and non-Natives over age 18 who have a history of substance abuse and are charged with a nonviolent offense, among other criteria.

Participants can live outside Pottawatomie County, although many Healing to Wellness candidates are referred after an arrest on Tribal land or within county lines.

But what it offers most is structure and accountability.

With slip-ups come sanctions, such as added community service, writing essays, more call-ins, earlier curfews, ankle monitors and even program termination and jail time. The Healing to Wellness program costs a non-refundable $1,500. Those who do well earn incentives: praise, phase progression, fewer restrictions, reduced court visits and other means to motivate clients to do well.

“The first thing is, for the Healing to Wellness Court, we give Indian people a cultural context and meaning to their journey toward sobriety so it has a relevance to them,” Judge Lujan said. “Things that they’ve heard in their past when they were kids — stories that they heard and other kinds of things that they learned — it revives those kinds of thoughts and memories and what the moral of those stories were.

“The second thing is, of course, the spirituality aspect of it, because an addict … only thinks of themselves and only what’s good for themselves without connecting to something that’s larger than them,” Judge Lujan said. “When a person achieves that kind of an insight into their life, they’re changed. They have a transformative experience.”

Nickie Skaggs, CPN’s drug court coordinator and Indian Child Welfare executive assistant, interacts closely with Healing to Wellness participants. She is a coach, confidante, mother figure, rule-enforcer and gatekeeper who has worked with the program since its launch almost four years ago and with the Tribe for 12 years.

“I love to see people change, have a clean life and have feelings and relationships with their kids and families,” Skaggs said. “I love to see the smiles on their faces. To witness the transformation from where they came from to what they have become brings tears to my eyes — showing them there is another way to live and be proud.

Whole-person programs like CPN’s Healing to Wellness Court are successful — about 98 percent graduate. Additionally, the Tribe built in workforce and social services for clients, offering job referrals and placement and education counseling and assistance.

“Yes, there’s close to a 98 percent success rate — we hear this a lot in all of our training,” Skaggs said. “It works because we try to help them in everyday life. I think we give them tools that they can use, like treatment that they have needed. … We help get them all ready to live a successful life.”

Sandra, age 32, sits at a table inside the Tribal courtroom. She just finished her weekly report with Judge Lujan and Skaggs. Her infant daughter coos as she rests in her carrier that Sandra had set on a long bench behind her.

She lives in Midwest City and makes the 80-minute round-trip journey each week to participate in a vital event. It takes about three minutes.

As she stands before the judge, Judge Lujan asks, “How many days of sobriety?” She answers, “Three-hundred and twenty-five.”

Everyone in the room claps, including the judge. He praises her program participation and attitude.

Skaggs then responds with a string of “negatives” for Sandra’s twice-weekly screenings.

“Excellent,” Judge Lujan says. They discuss other Healing to Wellness requirements before dismissing Sandra and continuing to the docket’s next client.

“When I got arrested, I went to Pottawatomie County, and I didn’t know that this was an option,” Sandra said of CPN’s Healing to Wellness Court. “They asked me if I wanted to do it. I was like, yeah, because a lot of people don’t understand that if you take people who are drug addicts or alcoholics and you put them in jail and then kick them back out, they’re going to go back and do the same thing because they don’t have any kind of rehabilitation.

“So it was a good opportunity for me.”

She was accepted into the program 11 months ago and is in phase three, about to graduate to phase four.

“I’m sober, and I finally have a vehicle. We have a place of our own. I have my daughter, and I’m actually living life the way I’m supposed to.”

Her drugs of choice were Xanax and marijuana, she said. She used for several years before entering the Healing to Wellness program. “I did drugs socially, with the people I was around and the scene I was in. I don’t associate with any of them anymore, which is really good.”

Her daughter, 7 1/2 months old during the March Hownikan interview, was born after Sandra entered the program. Sandra participates in 12-step meetings, twice-weekly drug tests (all have been clean since she began), counseling, family planning and budgeting education, work and daily call-ins while caring for her daughter. Soon, she said, she will also start community service or work out a way to pay court-related fines.

“She definitely keeps me motivated and on track,” Sandra said of her daughter. “This is all for her, because if I didn’t have her, my life might not be any other way than it was. She helps me strive more, because I want her to have a good life and to not have to go through being around all that.”

Twice daily, at 9 a.m. and 9 p.m., she calls and checks in with her caseworker. Being even a couple of minutes late can earn a sanction. She has been on time for the last four months, she said.

“I love my life now. Before, I just went day-to-day not caring and didn’t have any respect for myself or anybody else,” Sandra said. “It’s pretty great. I have all the Healing to Wellness Court members, the team. It’s not just my team — they’re like my family now.”

Taking one day at a time, she said she is not sure what she will be doing one or five years from now. “I’m focusing on being a mother,” she said.

She is interested in becoming a drug counselor, “I think it’s better for people who have been through it and experienced it instead of just being taught.

“It’s good to see other people succeeding, too.” Charged with 13 counts of misdemeanor ATM fraud, once Robert completes Healing to Wellness Court, he will serve 12 months’ probation.

Robert more recently joined CPN’s Healing to Wellness program. That Wednesday in March, he stood in front of Judge Lujan and celebrated 157 days of sobriety.

“I committed a crime on Tribal land,” he said during an interview with the Hownikan. “When I went to court, they gave me the option to do the 15-month program versus a year in county jail.”

Robert chose the former. Charged with 13 counts of misdemeanor ATM fraud, once he completes Healing to Wellness Court, he will serve 12 months’ probation. He will also pay restitution to the bank.

His drug use began with a broken arm seven years ago. Soon, he was self-medicating.

“I was on drugs when I committed the crime,” he said. “My drug of choice would be heroin or opiate pills. You know, Opana, OxyContin. When I couldn’t find any of those, I went to meth, and the stuff — the stuff just makes you crazy.”

When he began the program, he also received treatment to get through detox. He is now in the second phase, or the coyote phase, of the Healing to Wellness ladder.

“And that (detox treatment) was an epiphany for me,” Robert explained. “I would always worry — every time I got high, I knew I could die. During detox, I was wishing I was dead. Now, I do not fear death. I know it is coming at some point in time, but I don’t fear it every day, several times a day.

“That’s a big weight off my shoulders — not having to wake up in pain and go hustle up some drugs to be normal or feel normal. My whole thinking’s way different now.”

“Oh, I talk to Robert several times a day,” she said, then laughed. “We’re always talking.

“I would say it feels like family with every person in drug court,” she added. “We spend so much time with these people; they have my personal cell phone number and know they can contact me any time. If they need help with something or just need to vent, they know they can call me. I will always do my best to help. They have to learn to trust us. I tell them all the time, ‘We are here to change lives and want the best for them, that we can do this together.’”

Robert added, “The team, any member, is there for us. I feel they’ve become, to me, like family elders.”

Of the sweat lodges, Robert said, “First, you’re stepping out of your comfort zone, and you humble yourself and go in there and pray. … And then Elder Burt, he’s unique in his own way. He is awesome. I’m learning so much culture from him.”

Judge Lujan emphasized the importance of moving participants outside of themselves. Tribal elder Burt Patadal leads talking circles and sweat lodges with many of them, including Robert.

“The sweat lodge is an opportunity for a person to have a transcendent experience beyond the physical,” Judge Lujan said. “People wonder, ‘Why you do certain kinds of things that are painful or difficult?’ And just when you think you can’t make it and there’s no air left for you, you have a transcendent experience about what kind of being you are.”

Robert recently started visiting other tribes and participates in sweats and talking circles whenever and wherever he can.

“I went down to Lawton to the Comanches, and I go to the Kickapoos,” Robert said. “This week, I went over to the Absentee Shawnees over here, and Little Axe. I am just seeing how different nations conduct their sweat lodges and learning that culture, because we can teach our Nation and ourselves. That is an awesome thing, too. I try to learn something every day.”

He also earned his GED. “I had to teach myself algebra via YouTube,” he said, then laughed. Robert now attends vo-tech to learn how to become a CNC (computer numeric controlled) machinist and spends more time with his son, playing basketball and visiting the YMCA.

“This program is a lot about accountability,” Robert said. “I truly believe that if I go back out — it’s just the way it is for heroin addicts, you know, you get clean and then you go back out and you’re dead,” he said.