Grabers explore both sides of family heritage with sons 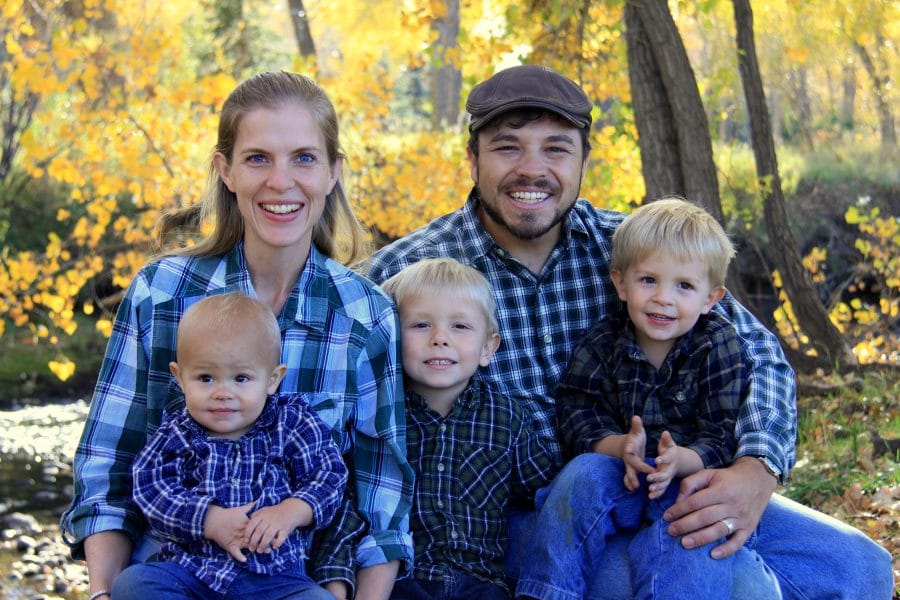 Uniqueness defines the Graber family, from homeschooling their children to their ancestry and jobs. Stacie, Joseph and their four sons cherish their heritage — both Potawatomi and Amish.

Parents Stacie and Joseph named their children after Heroes of the Faith: Peter Marshall (6), Eric Liddell (4), Hudson Taylor (2) and William Wilberforce (newborn). Peter happily tells anyone listening that he is both Amish and Potawatomi. He takes a mature outlook on being Native American for a 6-year-old.

“I come from the very, very, very first settlers here. I was one of the first people, one of the first nations to live here, which I kind of like about it,” Peter said with pride. His Potawatomi ancestry comes through Stacie’s maternal side, descendants of Jude Bourassa.

“My grandfather is in the lineage, and it was actually his wife who was just also so enthralled that they were registered Potawatomi and made certain that all of us grandkids got registered,” Stacie said.

She met her husband in 2010 at the former San Antonio Christian Film Festival. Joseph grew up in an Amish community, learning English as a second language at 6 years old. His native language is Pennsylvania Dutch, a dialect of German spoken by approximately 250,000 Amish and Mennonite descendants of German immigrants living in Pennsylvania.

He now works as a pastor of a nondenominational church and a filmmaker. Stacie homeschools their children, teaches piano lessons and helps Joseph run his Christian filmmaking business. They began creating music videos, shorts, documentaries and feature films together, and developed a nonfiction series Breaking the Silence: My Amish Story about the Amish and their beliefs.

Joseph and Stacie place emphasis on telling their story in an accurate, nonjudgmental light in order to provide clarity.

“He’s not angry. He’s not bitter. He has a heart for reaching (out) and is still friends with many of his Amish family,” Stacie said. “But there are also needs that are there that are not being well-addressed because of the way their culture stays separate from society.”

The Grabers produced the documentary over five years. Joseph considers the series “part of my personal quest to discover what my Amish heritage really means.” They researched and shot the footage across the United States and in Switzerland, visiting sites of his direct lineage.

It explores his immediate family’s history including his father, who served as an Amish minister. He began studying and reading the Bible in English, both of which the Old Order Amish discourage. The church eventually excommunicated the Grabers when Joseph was 14.

“(Joseph’s father) was really torn between believing what the Bible actually says and following God, and continuing to be a part of the Amish church. They have an incredibly strong teaching that the most important thing for an Amish person to do is to stay Amish. They believe that is the highest form of following God,” Stacie said.

She considered making the film as an opportunity to understand her husband better.

“I have loved learning so much about it, and thankfully, the documentary series has been extremely well received by the former Amish who are watching it,” she said, which she believes means they achieved their goal of making something “really honest.”

Their sons, particularly Peter, learned about their Amish heritage while watching their parents make and edit the documentary over the years, “mostly through osmosis,” according to Stacie. The children quote parts of the film and retell some of the stories on their own.

Joseph wants to produce a documentary about Stacie’s Potawatomi heritage and encourages her to research her family lineage. They intentionally teach their children about their Native American ancestry and think a new film project would have the same effect as Breaking the Silence.

Stacie’s maternal side of the family emphasized taking pride in being Native American. She is grateful Tribal members and the Nation offer their research on CPN history and genealogy to other members anxious to learn.

“I was really encouraged to find out that each one of my ancestors leading up really loved the fact they were Potawatomi and taught their kids about it and made certain their kids were registered,” she said. “It wasn’t ever a shameful thing, which I was really glad.”

As part of their homeschooling, Stacie includes the history of Native Americans and information about their lineage as she learns it. They also watch the CPN Language Department’s YouTube channel with children’s videos featuring traditional stories and basic vocabulary.

“They do have a lot of fun, especially my 6-year-old. He’s been super intrigued,” she said.

“I’m hoping that, in general, as we study American history and stuff and about all the tribes in general, the fact that they are (members of) a Native American tribe and can identify with that will give them a greater interest in all the Indian tribes.”

“(Joseph) is as much of a history buff as I am. And so even though it’s my heritage, he’s fully on board with studying it and reading up on it, and he finds it just as fascinating,” Stacie said.

She has an undergraduate degree in history, and Stacie and her husband both say they hold a practical view of learning about the past without over-glamorization. They use historical lessons to help their sons develop what they perceive as a set of honorable values rooted in truth.

“(We) would love for them to see just the way that history all works together,” Stacie said.

They emphasize recognizing the effects of decisions, on both themselves and others. The Grabers also study the Bible as a centerpiece in their schooling.

“We want to have a Biblical understanding of our past and more importantly, use the Bible as our guide for everyday life” said Stacie.

“I would strongly encourage people to study it together as a family for the greater appreciation of what’s going on currently and where they came from.”

Find the Grabers’ work and Breaking the Silence: My Amish Story at myamishstory.com. Follow them on social media at facebook.com/MyAmishStory and on Twitter @MyAmishStory.