Her story is my reason 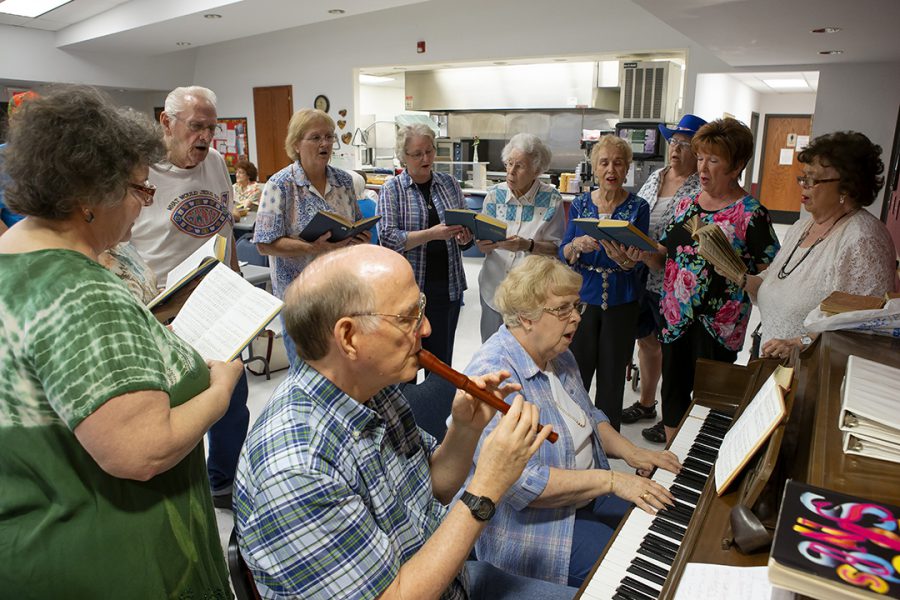 Almost any day of the week, visitors can catch up with Bill and Marti Roberts at Citizen Potawatomi Nation’s Elder Center. About 11:30 a.m. every Thursday, Marti plays piano, leading elders in singing secular, gospel and patriotic songs.

“He tried playing his trumpet up one day, but it was too loud for the center,” Marti said as she and Bill laughed about the memory. “I even stuck a mute in it, and it was still too loud — bye, bye trumpet!”

Marti finished, “So now he plays a wooden recorder.”

She was a Baptist missionary and he was in the Peace Corps when first they met on the Island of Saint Vincent in the Caribbean. After marrying, they moved to Grand Cayman, where they taught for about four years. From there, they left for Tokyo, Japan, and stayed six years.

“And a friend of ours called me while we were in Japan and said, ‘I’m working in Nairobi, Kenya, in a Mission School, and I would like for Bill to come and start a band program. Would he do that?’” Marti reminisced. “So we took a three-year contract and went to Nairobi. He taught music — band and choir — and I taught first grade.”

Bill also earned two master’s degrees, one in instrumental music and a seminary degree in choral music. Through all their travels, music has carried them, also lifting the minds and spirits of the many people they teach.

“Where science and math may be a little more cerebral, I think music, visual arts and dance is more of an expression of the heart. Some of my greatest joys in teaching music — for example — when we were teaching in Africa,” Bill said. “You have your good musicians, and that’s always satisfying, and you have a good band or good choir.”

What impacts him most, however, are the transformations made through the power of music. While in Kenya, one of his classes was for beginners, and students were required to take at least one fine arts credit.

Not everyone enjoyed it, at least at first, Bill said.

“Sometimes, of course, you get one who doesn’t want to paint and doesn’t care to sing: ‘Well, here I am; I need my fine arts credit. Let’s just get through this,’” he said. “One boy was quite belligerent, actually. I kind of joshed him on, and eventually, by the end of the semester, he found out he really liked it.

“You start fresh, teach them music, and by the end of it, they’re performing live for the first time. I felt good that they were enjoying it — they were satisfied, and I felt professionally satisfied,” Bill said. “When you have moments like that, that’s probably the thing for me, the highlight or the peak of satisfaction of teaching music.”

With their tenure in Kenya up, they returned to Japan, this time to Yokohama. They taught at separate girls’ schools until “it was time for me to retire,” Marti said. “At 60 years old, they automatically retire all their teachers. You don’t have a choice after that.”

As both have learned in the years since — if they didn’t fully believe it before then — they might end a career, but music doesn’t leave. It stays. The more they share it, the more they receive in return.

“When younger people are asking me, ‘What should I major in — athletics or music?’ Well, Athletics are good, but when you’re 50 and 60 years old, you’ll still be enjoying your music,” Marti said. “So learn it.”

Although she grew up in San Diego and he grew up in Michigan, and they lived and traveled overseas for more than two decades, through the years, Oklahoma became their home.

“My mother is Potawatomi (Bergeron family),” Marti said. “After my father died and was buried in California, my mother moved back to Oklahoma to the CPN elder housing because she had brothers and sisters who were still living there.

“On our vacations, we would come and visit my mother, and it was so comfortable to be here with family. So that’s why we chose, when we retired, to buy a house from the Tribe. We’ve been here since.”

Well, mostly, Bill corrected her. They both laughed again. Around 2010, they came back to Shawnee, Oklahoma, on one of those trips, Bill said.

“We were still in Japan before Marti retired and knew, well, we’re going to have to retire somewhere, you know?” he said with dry wit. “The Tribe had started this new program buying and refurbishing houses and selling them to Tribal members. We were shown the house we’re in now. We bought it. It’s right next to a public park in Tecumseh.”

They purchased their retirement home in 2002. Marti taught a year at Sequoyah Elementary School in Shawnee.

“Bill had gone back to Japan, to Yokohama, and said, ‘You gotta get over here with me,’” Marti said.

They came home for Christmases and visited in the summers, “to say hi to our house and then go back,” Bill said. This continued until he retired from his overseas job. They both finally settled into their Tecumseh home. Their three grown children now span the globe, too, living in Michigan, California and England.

“I’m retired now, but I still teach piano lessons,” Marti said. “I have five students that I teach each week.” She paused. “Bill is not really retired yet.”

He teaches an online music course to high schoolers and scores online English-speaking tests for international students wanting to work or study in America. He’s also the choir director at Blackburn Chapel Baptist Church in Shawnee, Oklahoma, where his wife is the church pianist.

“It’s an expression of God that only humans have,” Marti said. “When we can sing or play an instrument or paint a picture or anything like that, I feel like that’s God coming into us and through us.”

Most Thursdays, Dallas “Red” Barnes sings with Marti at the Elder Center. “He comes right up to the piano,” she said. “He has a beautiful baritone voice.”

Although his physical strength might not be what it used to be, “he still has his voice, and he sings, and it’s wonderful,” she said. “It’s wonderful to see all of them — everyone — enjoy themselves through music.”