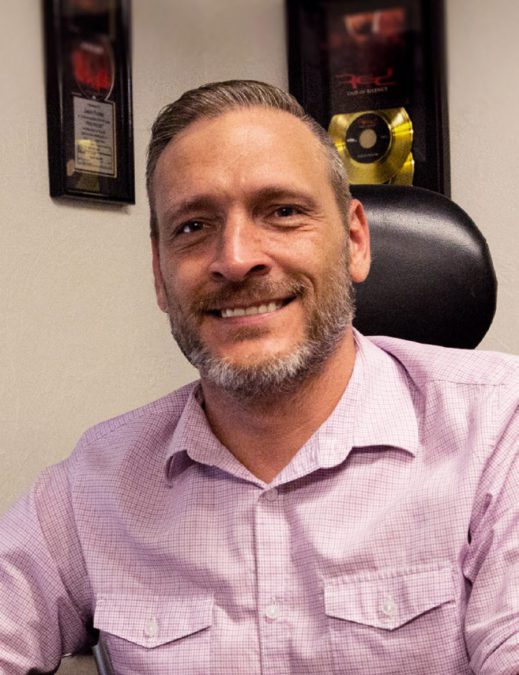 Just prior to his graduation from Southwestern in 2000, Fowler faced a dilemma. He played in pop-rock acts Spinaround and 7 Doors Down through college, and six months before he expected to complete his degree, his band announced it was headed to Nashville, Tennessee to pursue a record deal. He demurred, holding out and completing his final semester, but turned down a job teaching and coaching girl’s basketball in Colorado.

“The day I walked across the stage,” he recalled, “I got in my truck and went to Nashville.”

Arriving there, he started playing again and toured before the band’s record label, Pamplin, folded. Figuring up the payment to his managers while on the road and temporarily out of a job, he pursued another line of work in the music industry.

“I said to myself, ‘Hey I’m cutting my manager these big checks, maybe I’m on the wrong side of this business,’” Fowler said. “So I became a tour manager for a couple years.”

His job was the day-to-day management of bands and their shows while touring, not an easy task by any metric. However, Fowler’s experience as a musician on the road benefitted his new role in ensuring tours ran smoothly. He gained the trust of bands and crews he worked with, which eventually led to his next position a bit higher up the music industry ladder.

He managed a tour for Pillar after the group abruptly fired its manager, who refused to return phone calls.

“I told them I’d do it and they asked me if I’d ever managed a band before. They said they’d prefer someone with experience,” he recalled. “I told them I’d work for five percent and they said, ‘OK; you’re hired!’”

Typically, band managers earn 10 to 15 percent of tour revenue, so to get his foot in the door, Fowler took the risk of working at a steep discount. There were tradeoffs though, allowing him to get off the road and learn more about the business side of the industry, including contracts and record deals.

His career took off from there. Fowler eventually joined Union Entertainment Group where he helped manage Nickelback, Steven Tyler, Scott Stapp, Steven Adler, Thousand Foot Krutch and others. For a man who once faced a fork in the road when it came to pursing his dream of either a career in music or one in education, the gamble appeared to have paid off. Despite Fowler noting that most successful band managers were lawyers, he credits his success to his earnestness in doing business and his experience as a musician on
the road.

“It was funny; I’d have interns from Middle Tennessee State University and Vanderbilt who learned about the industry in college courses coming to me to learn about the real-life world of it compared to the academic world,” Fowler said. “You can’t make mistakes in the real world, because if you make a mistake, it’s not only affecting your money, but also every single member of the band and their family’s money.”

For 16 years, he worked with these artists and many others before branching out on his own in Nashville. Though his own firm, Straight 8 Entertainment, did well, he and his wife had grown tired of the city and looked for a return to Oklahoma. They eventually landed in Tulsa, where his wife has family, and Fowler continued on in the music booking business.

He came to the Citizen Potawatomi Nation after helping book a show at FireLake Arena. The concert, featuring pop duo For King & Country, was a success. FireLake Arena director Dennis Dyer asked Fowler to consider coming on board as the venue’s events manager and talent buyer.

“The biggest challenge a place like this faces is brand recognition; getting people to know it is here,” he said. “We’ll have shows and talk to people as they’re leaving and we always hear, ‘That was great! We didn’t know you all were here.’”

Fowler’s industry ties have helped draw acts as managers and bands he worked with over the years now become potential partners for future shows. Drawing from his experience managing bands, he said the key to succeeding in his role with FireLake Arena is being as upfront and honest about his role as he can with potential acts.

“I’ve never tried to burn any bridges. Now there were times when I was working for a band to get something they wanted so bad that it made me look bad in certain instances, because I had to get it for them. But I was always upfront and said, ‘Hey, look, it’s for the band. It is what they want; sorry guys.’”

While commuting from his Tulsa home to Shawnee each week, Fowler is always on the lookout for new acts and events for the arena. He surveys Pollstar music industry website and contacts managers of bands and booking agents for large-scale events to examine their potential for ticket sales, availability and other relevant information. Once booked, he also helps with publicity and marketing for the arena with local radio stations and other outlets to promote the arena and shows.

“We have to get people informed that this venue is here, it’s just outside Oklahoma City, and we’re cheaper in terms of ticket prices, parking and concessions and beer than most of our competitors in the Oklahoma City and Tulsa areas,” Fowler said. “When you buy a ticket from us, every seat is a good seat.” For more information on FireLake Arena and to see what shows are upcoming, visit firelakearena.com.