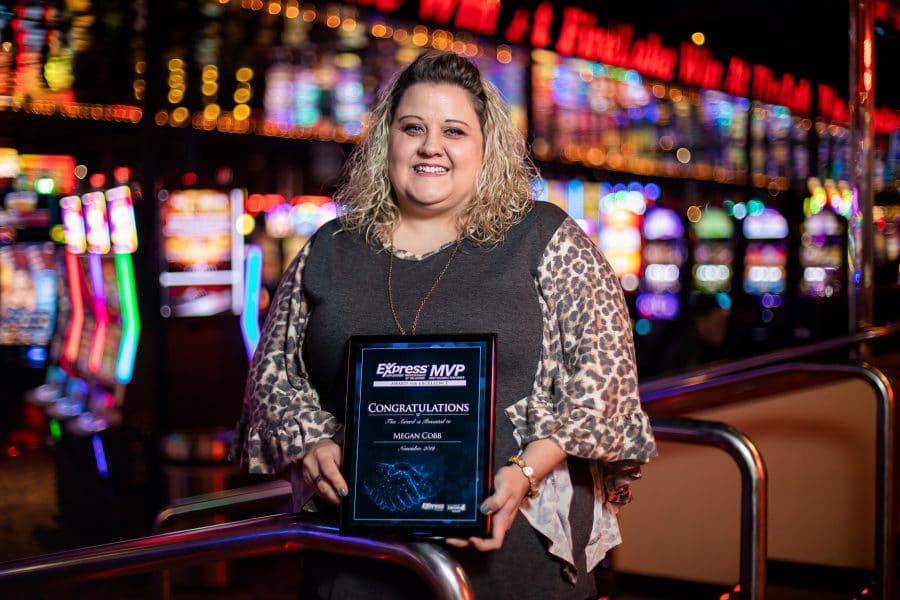 One day in late October, FireLake Casino Revenue Audit Manager Megan Cobb entered through the building’s double-doors to the sounds of people cheering. With a confused look on her face, she watched as her co-workers and others chanted “MVP” as she approached them.

KFOR-TV and Oklahoma City-based Express Employment Professionals recognizing her as their “Most Valuable Performer” for November 2019 came as a complete surprise. She had never heard of the program before.

OKC’s NBC affiliate station and the staffing agency teamed up in early 2019 to recognize some of the best employees in the metro. Each month, they select one outstanding employee from a pool of nominations.

The day they named Cobb “MVP,” a fellow employee tricked her into leaving the lobby. They set up the area for the news cameras and festivities. The news team stayed with her for about half an hour to film a segment. She had never been on the news or recognized for this kind of award.

“They wanted to follow me around, watch what I do. And I kept staring at the camera. They’re like, ‘Don’t look at the camera.’ It’s kind of hard, but it’s right here in my face,” she said and laughed. “But they were all super nice people, and I love that they do that for people.”

The award includes a $5,000 check from Express Employment Professionals, a personalized plaque and a parking sign labeled “Most Valuable Performer,” which now marks Cobb’s spot inside her garage.

The day went by quickly but ended with fond memories.

“When I went home and kind of sat there and thought about it, I really teared up a lot,” she said. “Just thinking of how much I mean to someone else or more than one person.”

The casino’s cage manager, Chris Campbell nominated Cobb for her resilience throughout the last year, which included balancing numerous family health issues. He said she comes to work with a positive attitude and accomplishes whatever falls in front of her. Most importantly, she still prioritizes helping others. However, if you ask Cobb, the strength comes naturally.

“(The award) means a lot. I mean, I’m just doing what I think everybody should do: going to work, doing their job. They keep telling me that I’m so strong,” she said.

“Of course, there’s days when I can’t control it. But for the majority, I still come to work and act like nothing’s happened at home, even when life is throwing tons of curveballs.”

Her favorite thing about working for CPN is the people. Cobb says it feels like small, close-knit family. While the award recognizes her accomplishments, she remains grateful for those around her every day who show their compassion and helped her through tough times.

“Just thank you for everything,” Cobb said.