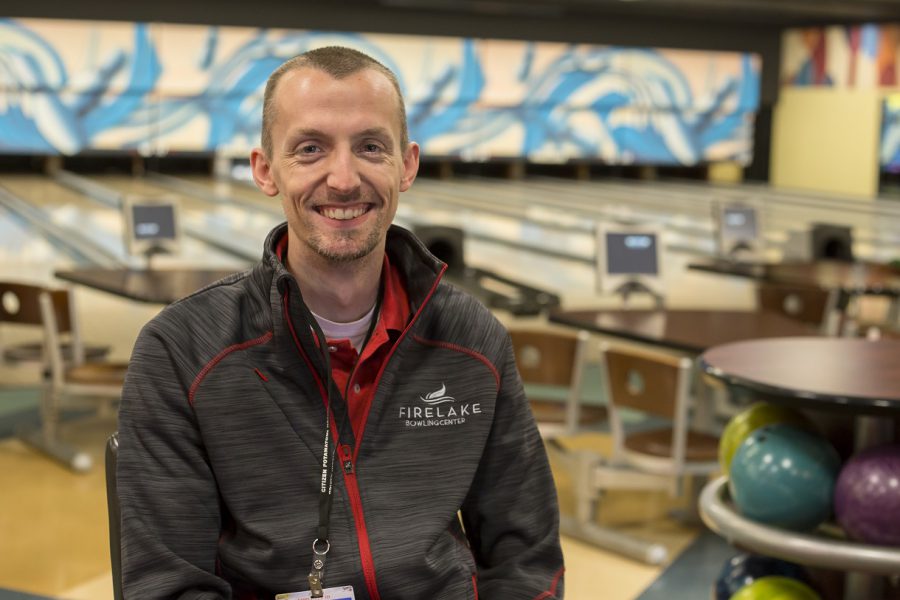 FireLake Bowling Center Director Blake Starr has been around the sport his entire life and competes professionally.

FireLake Bowling Center Director Blake Starr has been around the sport his entire life and competes professionally.

The clatter of tumbling tenpins is a constant for FireLake Bowling Center Director Blake Starr.

“I don’t even have to look at bowling pins to tell you what the guy leaves anymore — that’s how long I’ve been doing it,” Starr said as he listened to a ball spin down a polished lane behind him. “It sounds like he got about an eight-count right there.”

“Literally the sounds in a bowling center — anything from the smell — you know, you walk in, and you have freshly oiled lanes and that hits your nose.” More pins went down as Starr spoke. “This sounds like he got about five right there.”

Again, he was right.

Starr began working for Citizen Potawatomi Nation May 1. The Tribe was hiring for the position, and Starr happened to join a league team with a Tribal employee who told him about the job. The match was a perfect 300.

Starr has been around the sport since he was born.

“My grandfather managed multiple bowling centers; I think the first memory that I have was being probably about 5 or 6 years old,” he said. “My grandpa used to get up at about 5 o’clock every morning and would go to the bowling center very, very early. He got me my first ball. Every single morning, we would go in his office. We would watch SportsCenter probably from 6 a.m. to 7 a.m., and then I would go bowl as much as my little hand and heart could handle at the time.”

His family owned an alley in Muskogee, as well. Carrying on the family tradition, Starr’s hobby became his job at age 16. He has managed several centers since then.

He watched his family get to know the other families who came in the alley. It influenced how he runs FireLake Bowling, and Starr believes it is connected to the venue’s success.

“When you come here, you get that small-town Shawnee feel,” he said. “You get that tribal feel of everybody still caring about one another — wanting to see everybody around here do well with their lives and continue to be successful and grow, which is a lot different from a lot of other places.”

Starr earned his psychology degree from the University of Central Oklahoma in Edmond in 2013.

He said a bowling alley is a great place to see those principles play out up close.

“You can fit in from all aspects with bowling,” he said. “You go around and see these interactions between people and the relationships that they build just from coming to bowl. You get a great feel for all the personalities in the world.”

Starr said bowling is one of the most affordable group activities. However, he also said it is unlike many other sports people succeed at naturally. It takes a lot of practice.

He’s spent his life developing his bowling skills, including a collegiate career while attending Newman University in Wichita, Kansas, and now competes professionally.

“I’ve had multiple perfect 300 games here. (Bowling) an 800 series for three games is a big deal. I’ve had about 13 of those,” Starr said. “I perform on the PBA (Professional Bowlers Association) Regional Tour and compete at the highest level as much as I can, all around the state of Oklahoma and all around the country.”

For beginners or for those trying to play better, he recommended setting reasonable goals, finding a coach or mentor and using personalized equipment.

“Equipment is very vital in this game,” Starr said, and then admitted he owns “way too many bowling balls.” He is sponsored by Columbia 300 industry supply, which he believes sells the best bowling balls on the market now.

Some of his favorite things about FireLake Bowling Center are its pro shop, state-of-the-art arcade, weekend extreme bowling and renewed efforts at self-branding.

“(It) is going to continue to be a success, whether it just be enhancing more regular open play bowlers to come out and enjoy some recreational bowling to enticing more league bowlers to come over here,” he said. “We’re such a fun facility. We’re backed by such a great nation, and this place is just phenomenal.”