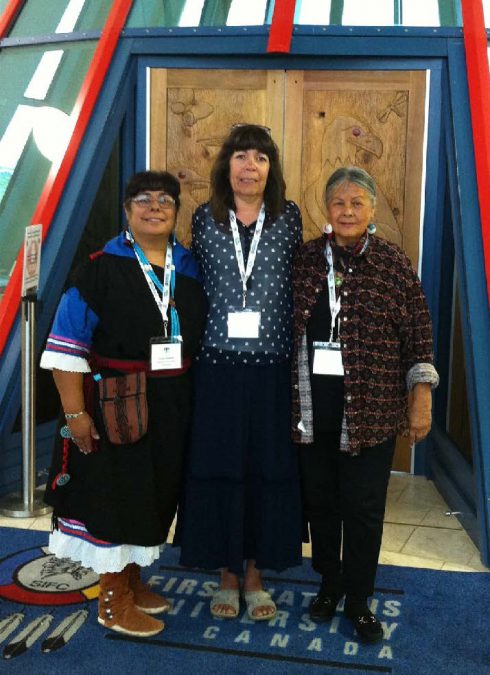 Crumbo Halsey said the conference was designed to connect indigenous communities culturally so that they will know one another better and work together toward shared resources.

Crumbo Halsey was part of the panel discussion “Ethics, Morals and Respect for Diverse Cultures and Worldviews.”

Because she is an elder and has led presentations on the traditional Potawatomi medicine wheel in the past, she was asked to speak at the conference. Her discourse focused on food sovereignty and Native people’s access to indigenous foods. Food sovereignty is an individual’s right to healthy, culturally appropriate and sustainable nutrients, as well as their own agricultural system.

“People are very interested in food sovereignty issues all over,” she said. “We’ve all got to get a grip on the food story for the health of everyone on the globe.”

The importance of food sovereignty

Since the early 1800s contact with Europeans, many Native American tribes across the United States were denied their customary ways of growing, harvesting and making culturally significant food. Many of those traditions were lost through forced assimilation, which included an adaptation to a more European diet and a removal from ancestral lands, where ingredients for long-established recipes grew heartily.

“It’s so important to know where our food grows, who’s growing it and then take it from food preparation to feeding,” Crumbo Halsey said. “The tribal situation and complex allow us to work within an understood framework of people with common values that can work together and can have proximity to one another.”

The conference and Crumbo Halsey’s presentation allows Native Americans in North America to connect and share their resources and history to reclaim the agriculture of their ancestors. In a time when processed and ready-to-eat foods are often the easiest options, food sovereignty also facilitates a reconnection with the land and a healthier diet.

Crumbo Halsey believes healthy globalization of Native American — and specifically Potawatomi — food traditions begin as individuals connect to their culture and the earth.

“Everyone is in a better position to communicate and do the give-and-take of information sharing,” she said.

As far as Potawatomi culture, that begins through a relationship with the Creator grounded with Mother Earth and Father Sky-Sun.

Some essential Potawatomi crops grown together are the three sisters: corn, beans and squash. Agriculturally, Potawatomi farmed these together in a mutually beneficial relationship, as each plant thrived off the assets of the others. Eaten together frequently, they also round out a diet and include nutrients like amino acids, vitamins and proteins.

“Food is our medicine,” she said.

Crops Crumbo Halsey referenced in her conference presentation included not only edibles like the “three sisters” but also ceremonial necessities.

Many Native American tribes use a medicine wheel. Potawatomi group sage, tobacco, cedar and sweetgrass each with a season and cardinal direction to form a complete wheel. The wheel is then used for blessing and cleansing in tribal rituals.

The future of Potawatomi crops

Crumbo Halsey also has contributed to an ongoing Citizen Potawatomi Nation project — the community garden. She said the sacred berries are represented, as well as the three sisters and elements from the medicine wheel: “The sweetgrass and different sages are coming in.”

She has been raising and acclimating various crops to Oklahoma that more easily grow in the northern United States. The goal is to be able to have a supply around the Citizen Potawatomi Nation headquarters in Shawnee, Oklahoma. Crumbo Halsey said the community garden is a “vast and wonderful experiment.”

“One of the things that I brought forward was sweetgrass,” one-quarter of the medicine wheel, Crumbo Halsey said. “That was sweetgrass that came from Canada originally. It stopped in Kansas for 40 years and was acclimated. And then I was gifted with some, and it happened to be in my gardens for four years.”

She is also acclimating the Potawatomi pea and white sage, or buffalo grass.

As for her next food sovereignty presentation, Crumbo Halsey joins an exhibition in Kansas City, Missouri, this fall themed around the idea of the vanishing prairie. Her installation centers on sweetgrass, which will hopefully include some acclimated strands of the crop to prove her point about the non-vanishing prairie.