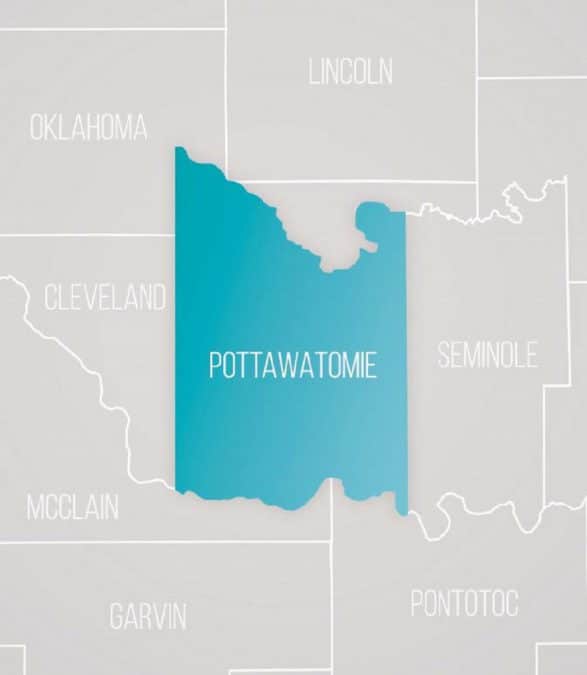 When it comes to describing Native American land, a common assumption might be to call it a reservation. However, depending on how land is divided and governed makes reality a bit more complicated.

Citizen Potawatomi Nation tribal historic preservation officer Kelli Mosteller, Ph.D., says there are many misconceptions around what is considered reservation land and what is not.

“I would say that even when people are Native, whether they live here or not, who are somewhat in tune with tribal politics, understand sovereignty to a degree and really are fairly educated about it can still be so confused about tribal land law,” she said. “It’s a complicated business.”

CPN’s land is classified as trust land, not reservation land. While Pottawatomie County was once entirely comprised of Indian reservation land, Oklahoma now has one reservation, which is for the Osage Nation.

To help explain why, Mosteller rewinds history nearly 130 years to 1890.

“For us in Oklahoma, we were removed here and given land by treaty,” Mosteller said. “But in the late 1800s, the pieces of land that were not in the hands of tribal members were opened up to the land run.”

An attempt to dissolve reservation land occurred in 1906 with the passage of the Oklahoma Enabling Act. It dissolved tribal governments and their jurisdictional boundaries, merging Indian and Oklahoma territories.

The federal government attempted to Americanize Natives by dissolving reservations and allotting a section of land to each tribal member. Allotment was the federal policy that said tribes could no longer own land communally.

Native Americans could sell an allotment and move away, but would lose legal rights as Native Americans on reservation land. Their rights only existed while on the assigned parcel and absolutely no political jurisdiction existed outside these boundaries.

“It just destroyed the culture. When you have a tribal culture where everything is done communally and then you try to make everyone individual yeoman farmers, it just annihilates the whole foundation,” Mosteller said. “Jump forward 30 years, and the federal Indian policy totally shifts. John Collier is in charge of the Bureau of Indian Affairs and says allotment as a policy is a total failure.

“He says we are creating mass poverty where we are having to take care of these people and we have done this to them — we have taken away their ability to care for themselves.”

Collier proposed the Indian Reorganization Act, which moved away from the policy of allotment and of dissolving tribal governments, act would become the foundation for Indian policy moving forward and would lead to a recognition of tribal sovereignty and self-determination.

“With the Indian Reorganization Act, they basically said that allotment was a terrible policy,” Mosteller said. “Tribes were doing really well until we started trying to make them into European farmers.”

So why couldn’t tribes in Oklahoma like CPN return to reservation land?

When Oklahoma opened up its territory, land runs moved in hundreds of thousands of nonnative landowners.

“What [government] had to do was pass a law that was a partner to the larger federal law,” she explained. “We passed ours in 1936, which was the Oklahoma Indian Welfare Act. It extended the IRA to Oklahoma tribes. It did not recreate our reservation; it just allowed tribes to create governments again. It allowed tribes to purchase land that tribal members owned and put it into trust.”

However, trust land and reservation land basically have the same legal standing, according to Mosteller.

“Now, if you take private land and move it into the new status of trust, it takes it back to where it’s just the tribe and the federal government,” she said. “The city, county and state don’t have say over trust land.”

“I don’t think most people understand it enough to question. Legally, we are virtually the same, but where you have a defined border of your reservation, we have a checkerboard. It’s 20 acres here, those 50 acres over there,” Mosteller said. “We can’t get a map out and draw a circle around a section and say, ‘It’s all in here.’ However, on those 10 acres of land there, or 20 acres over there, you still have the same rights you would have on a reservation.”