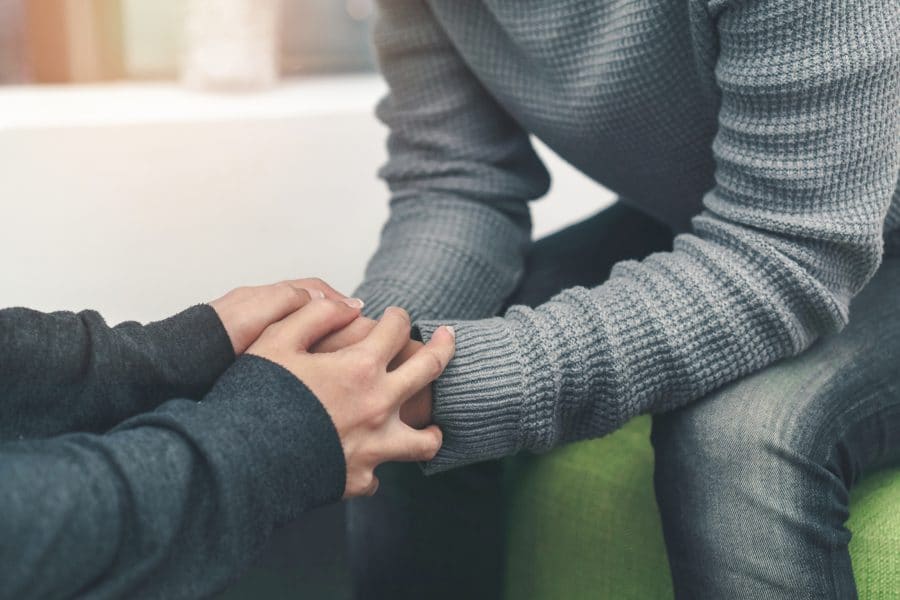 Maria Brave Heart Yellow Horse, Ph.D., Oglala Lakota, coined the term historical trauma in her article Wakiksuyapi: Carrying the Historical Trauma of the Lakota almost 20 years ago. She defined it as the result of long-term adverse occurrences. Negative experiences such as forced assimilation and removals, boarding schools and more continue to afflict the American Indian and Alaska Native community generations after the initial negative experiences. These incidents create devastating repercussions passed on to descendants, even though they never experienced the initial stressor first-hand.

“Think of it like this: If you grow up with a parent who frequently checks locks on doors, while you may not check locks on doors as much as that parent, you are still likely to check the locks on your doors much more than the general population,” said Citizen Potawatomi Nation Staff Psychologist Shannon Beach, Ph.D.

As a citizen of the Chickasaw Nation, Dr. Beach’s desire to serve fellow Native Americans inspired him to join CPN’s workforce November 2018.

“That has been my goal for as long as I can remember,” he added. “Being Native, I have always tried to focus on working with other Native people, and my research in my graduate program was around views of structure within Native families.”

Dr. Beach explained exposure to adverse, distressing events such as forced removal and cultural loss across multiple generations can manifest in anxiety, depression and other mental illnesses.

“These things are impactful to those we serve due to previous generations’ experiencing so much loss and hardship that has led to things like depression and traumatic stress, and impact the way they did things in many, many aspects of life,” he said. “This, in turn, impacts the future generations, who are those we serve today.”

Also, past threats can foster a belief that they still exist in some aspect today, said Dolores Subia BigFoot, Ph.D., of the Caddo Nation of Oklahoma, in the article Impact of Historical Trauma published by the Indian Country Child Trauma Center at the University of Oklahoma Health Sciences Center.

“There is an increased awareness but still a large field of learning opportunity to support various practitioners in the areas of understanding trauma and implementing trauma-informed principles within their practices, policies and procedures,” Clough said.

One of the center’s core trainings focuses on the continued dissemination and education related to prevention, intervention and court-based youth services. In order to overcome centuries of negativity, the public must recognize historical trauma’s influence across Indian Country and the strides made to provide healing.

“This understanding of the impact of historical trauma on American Indians and Alaska Natives has been critical to formulate a strategy for communities to take care of their members and better prepare for next generations,” Dr. BigFoot said.

Circumstances including displacement, natural disasters, domestic violence, death of a loved one and others can also create long-term negative influences. It is especially critical “when the traumatic conditions have created changes in the cultural, community, and the family connections,” Dr. BigFoot continued.

Cultural trauma attacks the society’s foundation, which affects the community’s essence, she added.

“Intergenerational trauma occurs when the trauma of an event is not resolved and is subsequently internalized and passed from one generation to the next through a variety of poor practices or impaired capacity to adequate care of one self for others.”

According to a study published by Brain Sciences, negative psychological encounters can create biological consequences by altering DNA, “and has the capacity to change the expression of genes.”

Inherited traumas often manifest in inappropriate relationships and parenting skills, substance abuse, anxiety, depression, anger and more. When coupled with intergenerational poverty, these indicators can be more pronounced. Lacking access to services often results in a higher potential for experiencing distress than that of more affluent communities.

American Indians have experienced employment, educational and economical disadvantages over the past several centuries, which influences family networks at higher rates than other races. The Indigenous “have encountered personal despair compounded with alcoholism or other self-destructive behaviors. Once self-reliant and self-sufficient, the American Indian and Alaska Native people were forever changed by the policies of the federal government,” Dr. BigFoot said.

When people struggle for daily survival, it becomes increasingly difficult to create sustainable plans and goals, she added.

“Despite these overwhelming obstacles, American Indian and Alaska Native people have endured; while continued existence has been a major struggle,” Dr. BigFoot said.

“If we fail to acknowledge issues like trauma, we may fail to provide services that are the most specifically helpful to individuals,” Clough said.

The American Psychological Association recently published Standing With Our Sisters: MMIWG2S written by CPN’s Director of Behavioral Health and citizen of the Kiowa Tribe of Oklahoma Glenna Stumblingbear-Riddle, Ph.D. The article highlights various strides across Indigenous communities to raise awareness about violence against Native women, girls and two-spirit people.

Dr. Stumblingbear-Riddle argued the Missing Murdered and Indigenous Women epidemic has deep psychological consequences, and researchers can trace violence against Native women back to the colonial era. Additionally, violence against women is not traditional, and many tribes were matriarchal.

“Historical trauma is very present in Native communities and can be seen in the internalized oppression and normalization of violence that Native people have been forced to face and overcome,” Dr. Stumblingbear-Riddle said. “In addition, there are disproportionately high rates of PTSD, suicide, depression and substance use disorders among Native people which accompany and result from the high rates of violence the community experiences.”

“We are still here thanks to the resilience of our ancestors,” she said. “Tribal communities are exercising their sovereignty and working with many programs and partners to best serve their tribal citizens.”

“We use counseling techniques and practices that we all learned in our training programs, but do also try to use them with awareness of the impacts of historical trauma and awareness, when we can, of various cultural practices,” Beach said.

CPN also combats negative mental health statistics by working with the community to reduce suicide and substance abuse. Tribal employees can join monthly Question, Persuade, and Refer (QPR) trainings to learn how to address individuals with suicidal thoughts and encourage them to seek professional assistance. While the trainings are currently only available for CPN employees, the Nation’s future plans include extending this lifesaving education to the public.

“Our teachings and traditional ways have never been individualistic. We are more effective when we have strong ally-ship,” Dr. Stumblingbear-Riddle said. “While our numbers may be small, working together, we are mighty.”