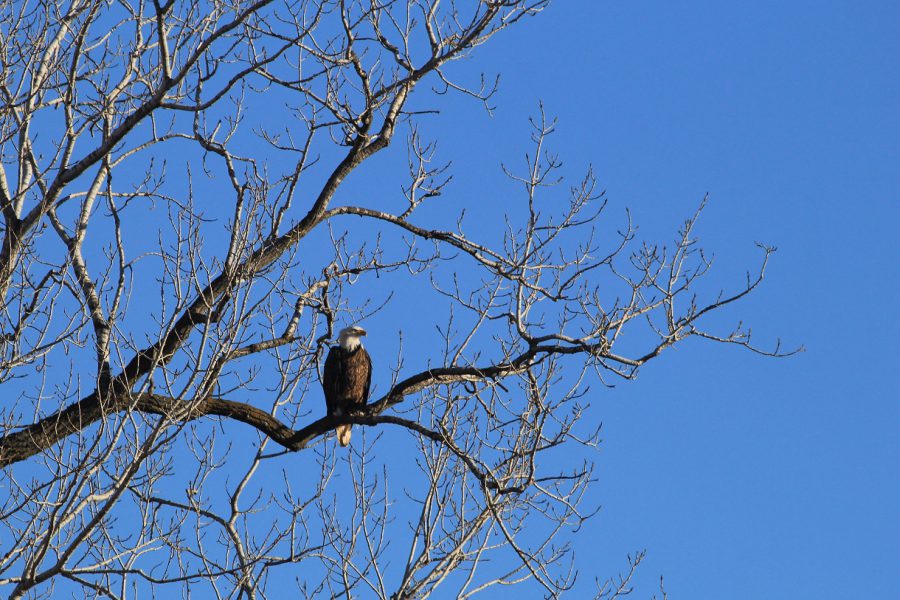 An adult bald eagle perches above the nest platform in the cottonwood in the aviary pasture with Martin nearby.

An adult bald eagle perches above the nest platform in the cottonwood in the aviary pasture with Martin nearby.

The plan for this article was to compare and highlight the differences in the telemetry data and progress of the two eagles we have released. The eagles have, however, changed our storyline once again.

First and foremost, Wadasé Zhabwé and Mko Kno are both doing well. Since Mko Kno’s return to Oklahoma, he had been staying on the Great Salt Plains Lake. Wadasé had been making the rounds to her usual spots between Lake Stanley Draper and the eagle’s nest around Harrah. One afternoon the first week of February, Mko Kno headed south.

As he got closer to the central portion of the state, Wadasé was headed toward him. Telemetry data puts them as close as 5 miles apart, but we believe they were much closer for a good part of the day. Once those telemetry points nearly converged, they turned south along a very similar path.

Wadasé stopped near Chickasha. Mko Kno continued south past Walters and turned east toward Waurika Lake. He would not stay long, though, and has since traveled north up through Norman and Midwest City, and made a brief stop at Lake Arcadia before continuing to the Cimarron River in between Perkins and Coyle.

All this movement is a great indicator that he is doing very well. An eagle that is not catching regular meals would not be able to make long trips crisscrossing the state.

We hoped we would get the chance to see Mko Kno as he headed north. Telemetry data showed he was fewer than 25 miles from the aviary at one point. We would keep watch for him the next three days as we waited for the next telemetry cycle.

In early gray daylight, before we arrived at the office the next morning, we heard the eagles call. We knew we had a visitor. This call was different from their normal morning calls, so we rushed outside. There was a silhouette of an eagle high in Wadasé’s tree.

As it got lighter, we could see it was an adult bald eagle, and not Wadasé, either. But it was a familiar visitor.

This male bald eagle has been here many times in the past year. In fact, he was the first eagle we have seen Wadasé tolerate here on the property. He perched near her the last time they were here together. We’ve been calling him Martin. He seems comfortable and curious about the other eagles. He spent the better part of the day here and was here the following morning, but he wasn’t alone. There was a juvenile with him, but not Mko Kno.

About sunset that afternoon, the first male eagle Martin was here alone. He made a flight past the enclosures and around the pasture before landing out near Wadasé’s platform. He walked around picking at grass here and there before he turned to face the aviary and took a couple of steps as if to get the grass just right and he laid down. Out in the open, on the ground, laid down and just looked around the pasture! He also preened his feathers or picked at the grass around him.

We wondered how long he would stay there. We worried that if he stayed on the ground too much longer, he might not be safe because it was getting dark. But the train nearby startled all of us as workers hooked rail cars together. With that bang of cars, he was up and off to perch along the creek. We have spoken to several experts who have studied eagle behavior in the wild for years and not one has encountered that in the wild. 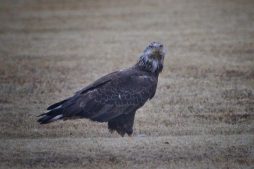 Juvenile at daybreak with Martin at the CPN Aviary.

The following day Martin was here alone until midday. About the time we were heading to eat lunch, we heard eagles calling outside the enclosure. There were not one or two, but four out front. One larger adult bald eagle, most likely female, chased the juvenile from perch to perch before the juvenile seemed to have enough and headed west toward the river.

The female gave chase. The two tumbled and twisted from high above the treetops to just above the tall grass as they flew across the creek and out of sight. It wasn’t long before the adult returned and landed in the cottonwood tree above the previously installed nest platform, hoping Wadasé might be interested in nesting nearby. The adult stayed there until late afternoon, satisfied, it would seem, that she had chased the juvenile away.

Before sunset, two eagles headed toward the river. Soon after, Martin circled the pasture and landed. He walked around briefly before finding a place to lie down again.

Perhaps he is that comfortable here, or perhaps this isn’t unusual and was undocumented until now. Either way, it is another first for us. Even though we didn’t see Mko Kno, we are thankful the eagles come in to visit the others here and that we are able to observe and share their interactions with you.

We encourage you to watch out for Wadasé and Mko Kno if you are near any of the areas they frequent.

For more information about the CPN Eagle Aviary near Shawnee, Oklahoma, or to read previous updates, visit potawatomiheritage.org.

Share your encounters with Wadasé, Mko Kno or any other eagles in Oklahoma or wherever you may be with us at aviary@potawatomi.org.