Dream Warriors give hope to troubled Natives through music

A group of five musicians from Dream Warriors Management stopped at Citizen Potawatomi Nation this September. During their national “Heal It” tour, they performed for thousands of Indigenous youth at schools across the U.S.

“I just love making music already, and it is definitely a motivational and inspirational tool. And it’s a tool for building community and networking and educating,” said Paul Wenell, also known as rapper Tall Paul. “Music has proven to do all those things, and … listening to artists that I appreciate has done that for me as well. So, it’s a reciprocal relationship.”

CPN Cultural Heritage Center Education Specialist Kristen Wilson first encountered the Dream Warriors earlier this spring while attending the Symposium on the American Indian at Northeastern State University in Tahlequah, Oklahoma. The performers’ honesty about their pasts and willingness to admit their efforts to establish a tribal connection as an adult impressed her.

She felt their message could benefit Indigenous youth in the larger Shawnee, Oklahoma, area effected by low graduation rates, high poverty levels and low income. Wilson described suicide as “an epidemic” affecting many of the communities where the group performed.

Using a Methamphetamine and Suicide Prevention Initiative grant, Wilson scheduled the group for a performance at the CHC during National Suicide Prevention Month. The five artists shared their experiences with their audiences to give them hope. 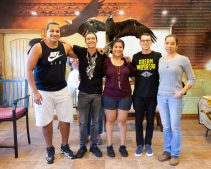 “As young people, we went through drug addiction, incest, domestic violence, low self-esteem, suicidal ideation,” said Dream Warriors musician Lyla June. “We’ve been through it all, and we know that a lot of youth in Indian Country are going through the exact same things as a result of colonization and what happened to our people.”

One of their typical shows includes a large sound system and hundreds of young attendees. The musicians play several modern hip-hop pieces as well as traditional tribal songs using hand drums and Indigenous languages. The group also incorporates a question and answer session into each performance.

“We come with music because it’s what the kids can relate to, and it’s just a way to connect with people — not just through their mind but through their whole body, and through their heart, and through their spirit,” June said. “You can go up and give a PowerPoint all day, but it’s not going to affect people emotionally the same way that music has, and I know that Creator gave us that gift for a reason because humans all around the world have music.”

Unlike a typical performance, their show at CPN did not include large speakers. Approximately 60 people attended, including many elders. The Dream Warriors introduced themselves, and each of the musicians played two or three songs. June described it as “very intimate” and “beautiful.” Afterward, they revealed the backstory of each song — how it came about and the inspiration.

“We kind of got to have this little jam session, and we just kind of sat at the front of the crowd and just spit acapella verses, told stories,” Wenell said. “Some of them sang songs, used the guitars. It was cool, real organic. We just sat down and did what we do.”

Wilson aimed to bring awareness and healing through the Dream Warriors’ visit. She felt she accomplished her goal when a Tribal elder thanked the group for the closure their presentation provided her. The historical trauma she experienced while attending Indian boarding school dissipated over time, but the wounds lingered. The musicians’ songs and stories also made her think about her grandchildren.

“She was glad that there is somebody of this era to be able to bring healing to our communities, even for her at her age. She felt this was something that she thinks everybody needs,” Wilson said. “As long as we were able to touch and help heal somebody, one person, then that was my overall goal.”

The day following the CHC performance, the Dream Warriors stopped by the CPN Eagle Aviary before continuing their “Heal It” tour. The musicians treasured the unique opportunity to visit one of the eight Native American aviaries in the country. They spent time with the eagles praying, singing traditional songs and reflecting.
“We go around talking to these students, and we pick up all their stuff — and they got a lot of stuff,” June said. “We just let it all down here with the eagles … and we gave it to the eagles. And the eagles, we know, will give it to Creator.”

The performers center their musical careers on helping others as opposed to money and fame.

“We do music and entertainment in an Indigenous way where we go back to the community,” June said. “We lift them up and say, ‘Hey, you can be a Dream Warrior. You can make music, and you can overcome whatever it is that you’re facing.’”

Read more about Dream Warriors Management and the musicians at dreamwarriors.co. Keep up with events going on around CPN, including ones at the Cultural Heritage Center, at potawatomi.org/events.