Schuetzner is a descendant of the Bennett family, and she opened the store five years ago. However, her fondness for canines began as a child on her grandparent’s farm in Seminole.

She said for many people, their companion animal is all they have.

“I’ve met so many people in my life, not just doing this — so many kids, so many adults that say, ‘My pet is what got me through a rough time,’” she said.

“It’s amazing how the animals are so in tune to us,” she said.

Schuetzner said dogs are like children, and they are capable of reading human emotions.

“Ninety percent of problem behaviors are a direct result of the dog being bored,” she said.

She encourages owners to keep Fido’s mind challenged. Her store sells toys, including KONGs, which can stimulate and enrich their brains.

“If you don’t have the money for KONGs and stuff, get a milk bottle. Drill holes in it, and put their kibble in that,” she said.

“We sell stuff that you can’t get other places in Shawnee, and it’s usually made in America or Canada because their food has a higher quality than ours,” she said.

“We have some standards here,” she said. “I’m not a vet, so I can’t be an advocate for certain brands of dog food, but I tell people I can educate them.”

She encourages clients to use dogfoodadvisor.com when looking for the best dog food brands and recipes.

“I remember feeding our dogs Ol’ Roy, but none of my dogs lived past 7. They all died,” Schuetzner said. “Now I am in uncharted territory because I have 15-year-olds at home.”

“There are different ways to train a cadaver dog,” she said. “The way I picked for Blitzkrieg was starting him on historic bones and teeth when he was eight weeks old, rewarding him with his toy he picked and making it fun.” 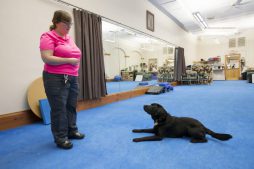 “Taking on cases means closure for the family, evidence for the prosecutor and justice for those who can no longer speak,” she said.

To keep up on his certifications, Blitz trains for at least 16 hours a month.

“Blitzkrieg is the only NAPWDA Cadaver dog that I know of in the state, but there are other cadaver dog teams through search and rescue programs,” Schuetzner said.

Shortly after opening the store, Schuetzner learned she had breast cancer — the same type her mother and other family members experienced. Knowing her family’s medical history, Schuetzner began preparing years before her diagnosis.

“I started changing my diet, eating right, losing weight and getting ready for the fight,” Schuetzner said. “It was just a fluke that at the age of 36, I actually got diagnosed. It was a lot sooner than I expected.”

Doctors said her prevention efforts might have kept the malignant cells from spreading throughout her body.

Schuetzner’s family, friends and loved ones inspired her to not give up. She decided to name her cancer Felix, and said when others reach out to her for advice, she encourages them to follow suit.

“Name it. It gives you control, and that’s the one thing cancer takes away from you is control,” she said. “It’s like a rollercoaster — it’s a marathon. Take each day as they come.”

The only true thing one can control is their attitude, she said. She attempts to take her own advice.

While receiving treatments, Schuetzner almost closed The Doggie Spot’s doors. Through the support of others, her business still thrives today. To help repay the favor, she donates to several local organizations including the Seminole Humane Society; S.P.A.R. – Saving Pets at Risk; and OK Save A Dog. She’s also helped with awareness campaigns for domestic violence by partnering with the Citizen Potawatomi Nation House of Hope.

“A lot of our clients are like family to me,” she said. “It is about building your community and knowing that you’re not on the boat alone.”

Because of her respect for elders, Khara made the decision to move back to Oklahoma.

Before opening in downtown Shawnee, Schuetzner worked as a scientist and spent several years teaching inner-city youth. After stints in Argentina and Chicago, she decided to make Shawnee home.

“I was teaching and training dogs when we moved back to Oklahoma for my grandparents,” Schuetzner said.

Her Native American great-grandmother Grace influenced her the most as a child, she said. Since moving back to Shawnee, she realized, “everyone on our street is CPN, and they’re all family oriented.”

While running one day, a neighbor stopped Schuetzner. The neighbor said to her, “I remember your mom. She drove me to my cancer treatments.”

Schuetzner said she didn’t know her mom helped other patients.

“It’s kind of interesting how sometimes you just need to stop and get to know your neighbor. They might know something about your family that you didn’t even know,” Schuetzner said. “I think the cosmos or God — or whatever you want to call it — works in mysterious ways.”