I wish you a new year filled with peace, good health and good family times. I am hopeful that each of us will gain more knowledge about our Potawatomi heritage and be more giving of our time and talents during 2018. My time serving as a legislator, which started with the start of our 16-member legislature in 2008, has been so personally enriching in a wide variety of ways, including that it has given me the opportunity to meet many dear Potawatomi around the country, from our band and others.

Migwetch (Thank you)! I’m incredibly fortunate to now have meaningful new friendships, to have the opportunity to keep learning from everyone I meet and to help grow our District 2 community here in the mid-Atlantic and south. 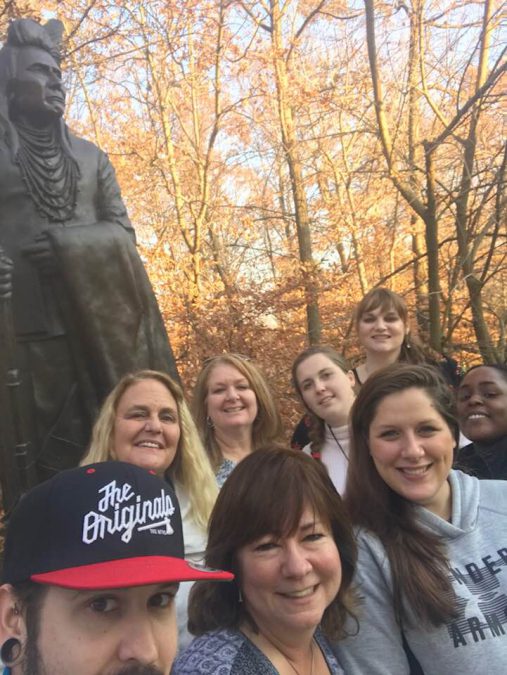 On the first two days of December, we fit in back-to-back District 2 events.

Dec. 1, a group of us visited the archives of the National Museum of the American Indian in Suitland, Maryland, where we explored a number of Potawatomi objects in its collection. We started in the archives’ ceremonial room, where we smudged ourselves and accepted gifts of tobacco harvested from plantings outside the museum, which is located on the National Mall in Washington, D.C., before heading into the stacks.

Our group included Lyle Simmons and Dawn Walker from Louisiana; Robert Pearl and Janet Pearl from Ohio; Tammy Clark from Florida; Jessica Clark from North Carolina; Susannah Howard from Vermont; Whitney Greenfield from Maryland; and me, from Virginia. I’m sharing a group photo with my column. A limited number of photos of the objects we visited are posted on the District 2 Facebook page. (The Smithsonian has asked that we limit circulation of photos from its archives tours, so I did not include a public link here.) As is the tradition now, we had lunch together before the tour and ate too much dessert. 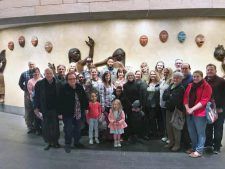 The same group of folks then met up with another 20 or so Potawatomi family and friends on Dec. 2, for a docent-led tour of the Nation to Nation: Treaties Between the United States and American Indian Nations exhibit at the museum itself. We were able to study the Fort Wayne Treaty of 1809, which is part of the exhibit. It was an agreement between the United States and the Delaware, Potawatomi, Miami and Eel River tribes, ceding tribal territory to the U.S. government. It remains on display at NMAI through January. While we could not take photos of the treaty itself, you can view it online and learn more about the exhibit at nmai.si.edu/nationtonation.

I’ve included a group photo taken before the tour. The group included the folks listed above and, among others, Laurel and Vaki Wawema and their young children, and Paulette Wamego, all from the District of Columbia; Davis Hobdy and his spouse Ken Armstrong; Josh Barnett and his young daughter; and John Pierce and his teenage daughter, Hailey Pierce, all from Maryland; and Dell Chalk, and Kim and Ed Pratt, from Virginia. 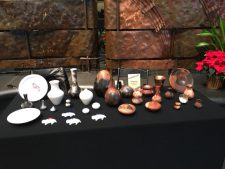 After the tour, most of us visited the Native artisans who were participating in NMAI’s annual Art Market. Several of us visited with Potawatomi/Kickapoo artist Pahponee, whose exquisite pottery is seen in the photo here. It was definitely a memorable day!

Please mark your calendars and make plans for the next District 2 event March 10 in Birmingham, Alabama. We will tour the Birmingham Civil Rights Institute, 520 16th Street N, beginning at 10 a.m. and then move to a BCRI conference room for our meeting and lunch. There is no cost to attendees. I hope to see many of you there and am accepting RSVPs now.

Please check my calendar page regularly for newly scheduled events — the treaty tour last weekend came together in just a few weeks, and there may be similar, somewhat spur-of-the-moment opportunities to visit together in the coming year.

In this new year, I am hoping that new life is breathed into Congressional legislation, introduced in October, to improve the federal response to the crisis of missing and murdered Native women.

On some reservations, Native women and girls are murdered at a rate more than 10 times the national average, and some 84 percent of Native women have experienced violence in their lifetime. Last year, North Dakota had 125 reported cases of missing Native women, according to the National Crime Information Center, and more than 5,700 Native women were reported missing nationwide. See a short interview about these horrors at mprnews.org/story/2017/11/10/missingnativewomen.