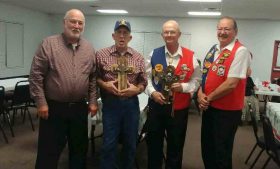 After reviewing what the Citizen Potawatomi Nation Veterans Organization did in 2017, we were busy to say the least. We had an election for the secretary and treasurer positions of the organization. The incumbents Bill Wano and David Barrett both were re-elected to their post.

As the CPN Veterans Organization, our bylaws require us to meet every fourth Tuesday of each month. Members of the organization comprise the color and honor guards.

The color guard also partcipated in a flag retirement ceremony at Woodland Veterans Park and a 21-gun salute for Memorial Day at Resthaven Memorial Park, both located in Shawnee, Oklahoma.

During every Grand Entry at the CPN Family Reunion Festival and Gathering of Potawatomi Nations, we are there to represent our veterans along with our great Nation.

The honor guard members wear a black ribbon shirt with a gold ascot. In addition to events, the guard has presented folded American flags locally at funerals in Wanette, Tecumseh, Shawnee, Sacred Heart, the North Reunion Hall and Mission Church. 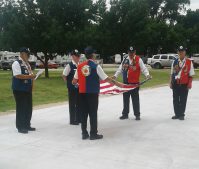 Last year after our annual veteran meeting during Festival, we had a flag retirement ceremony, but at the beginning, we did a flag-folding ceremony, explaining what each of the 13 folds meant. This received a great amount of positive comments. For Veterans Day, we were asked to recite the meaning of each of the 13 folds as we folded the American flag on stage at Tecumseh High School and again were requested to recite the meaning while we folded the flag for presentation at a funeral.

We ended the year, as always, with having a veterans Christmas dinner. I want to shout out an “Oorah!” to Richard Driskell, director of FireLake Discount Foods, and Kat Waldrup at its FireLake BBQ department for making a fantastic brisket and chicken menu that was out of this world. Dewegen Kewk (Women’s Hand Drum Group) has serenaded us for the past five-plus years. They always do a great job. During the program, we presented Cmdr. Daryl Talbot and team leader Herb Holton with plaques for their dedicated service. Jennifer Randell and Bree Dunham from CPN Eagle Aviary surprised us by bringing one of the eagles to visit us during the Christmas dinner.

We as the Citizen Potawatomi Nation Veterans Organization want to say thank you to all the veterans for allowing us to represent you. Also, to the membership of the Nation: We will always be representing CPN with great respect and honor. We feel that Native Americans treat their warriors with high esteem. We should never let our comrades down. It is an honor for the color guard to attend these functions for our veterans and the Nation.

At this time, I would like to recognize our current participants in the color guard and honor guard over the last several years: Cmdr. Daryl Talbot, Vice-Cmdr. Derek Skaggs, Secretary Bill Wano, Treasurer Rep. David Barrett, Team Leader Herb Holton and members Don Anderson and Kenny Reed. Let us not forget our wives, who prepare the meals every meeting.

Just remember that you are only as strong as you are honest. Pride is about your glory; humility is about God’s glory.

Thank you for allowing
me to represent you and
our great Nation.