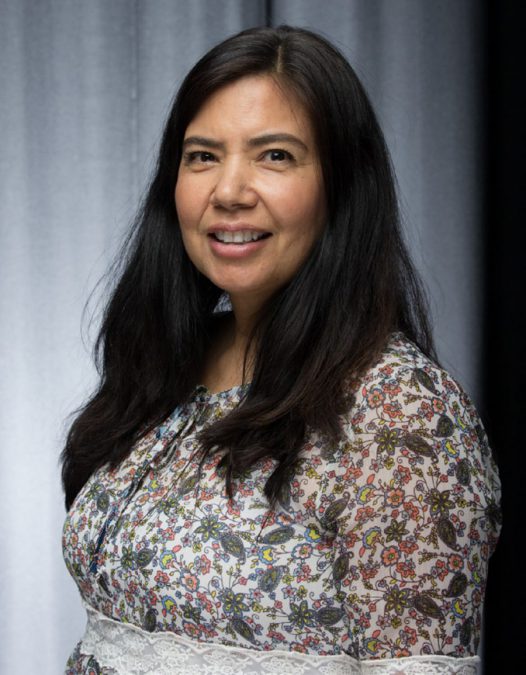 By day, she works at the Citizen Potawatomi Nation’s Cultural Heritage Center as production assistant, but by night, she makes a name for herself in the fashion world.

“My mother was really interested in fashion and she was a very stylish lady when I was young,” Deer said. “I’m partially inspired by her and partially just because I like to play with colors, sketch things, and create. I’m also inspired by my tribal background and I like to apply that — I just use apparel as an outlet.”

Deer applies southeastern Mound Builder designs on fabric using a sewing technique called applique, or ornamental needlework. She said her garment making developed as a necessity more than 20 years ago when she was a cast member in a Native American dance company that toured roughly nine months a year.

“When you only have one or two dresses and you have to wear them about eight times a week it gets kind of old, so I decided I wanted to start making more outfits for myself,” she said.

Deer sewed well enough to make her own regalia. She was pleased when the completed pieces had same-length sleeves and didn’t fall apart. People started asking Deer to create regalia for them as well, which encouraged her to more seriously pursue fashion design.

“I started doing a few Native American art markets, but at one point I realized that I really didn’t have the complete set of skills to make garments to fit just anybody,” she said. “I could fit myself okay, but I didn’t really understand how to make patterns that could fit other people.”

She went back to school and earned a bachelor’s degree in apparel design to understand fashion techniques like pattern drafting and draping to build her confidence and skillset.

“I think that’s kind of what launched me into taking it to the next level,” she said.

It’s been a long process. After graduating two years ago with her second bachelor’s degree in apparel design and production from Oklahoma State University, one of her professors recommended to Deer that she join the Her Art: Women Art Fashion event. The July Her Art event, held at 21c Museum Hotel in Oklahoma City, Oklahoma, blended art and fashion and showcased local, national and international artists in a fundraiser for Oklahoma City-based nonprofit Institute of Economic Empowerment of Women, which mentors and educates women in war-torn and impoverished countries about launching their own small businesses.

“I had a great experience at that show,” she said. “It’s always nice to be able to put your designs in front of other people and share a little of your culture. That’s always something that I welcome.”

Deer said she is proud of her newest and favorite piece.

“It’s a full-length dress of silk velvet,” she said. “I hand-painted the velvet and I have southeastern designs that are laser engraved into the velvet from the hem of the dress going up about halfway.”

The most rewarding part about being a designer is showing her work, something Deer does often at art markets. Last summer, Deer designed a dress inspired by traditional Muscogee tribe bandoleer bags, and it was purchased by the Smithsonian Institution’s National Museum of the American Indian.

“I made a dress out of wool and did a lot of beadwork using antique Italian glass beads,” she said. “I used some of our tribal designs from the Mound Builder culture again and beaded those onto
the dress.”

She showed the garment at several art markets before it became a permanent part of the Smithsonian’s collection.

“It really is a great honor to have something there, to know that it will be cared for there and preserved for years and years to come,” Deer said.

“In the next five years, I hope to grow and expand my business and to be a lot more of a recognizable name and designer in the Native community and beyond,”
Deer said.

Learn more about Deer and her fashion line at ladeerapparel.com.