According to the Centers for Disease Control and Prevention, Native American youth are three to four times more likely to attempt suicide than any other race. Across all ethnicities, suicide is a leading cause of death. In fact, the CDC Vital Signs June 2018 edition reported the suicide rate for all ages in Oklahoma increased nearly 38 percent between 1999 and 2016.

Having a strong cultural identity and participating in traditional customs, ceremonies and other Native American practices can positively influence mental health across Indian Country and help to decrease attempted suicide across all age groups.

“We know that identifying and participating in one’s culture is a protective factor, and we encourage it,” said Dr. Glenna Stumblingbear-Riddle, CPN Behavioral Health director and citizen of the Kiowa Tribe of Oklahoma. “When we’re thinking about youth who are having suicidal thoughts, just like we always take into consideration a range of risk factors, there are protective factors we consider too.” 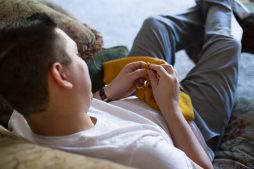 Today’s youth use technology and electronic communication more than any generation before.

A 2015 Common Sense Media report revealed individuals ages 13-18 average nine hours of entertainment-based screen time per day. This significant use may cause negative consequences. From 2008 to 2015, the hospital admissions for suicide-related cases in youth increased from 0.67 to 1.79 percent.

“We’ve also noticed a significant percentage of youth are now much more depressed. A lot of people believe it has something to do with cellphone use and social media,” she said. “Young people, even elementary school students, have phones, and they’re getting cyberbullied.”

Although no research claims a definitive link between social media and the increased suicide rate, a CDC correlation study indicates a potential link. However, social media can also open doors and provide a platform to connect Native Americans across the country.

“Young Native leaders on social media destigmatize mental illness through motivating and talking about experiences,” said CPN Cultural Education Specialist Kristen Wilson. “Social media can be both positive and negative. There is a lot of negative everywhere, but if we can look at the positive things and focus on that instead, it can give our youth an outlet and resource to know what other Indigenous people are facing.”

For parents with children on social media, Dr. Stumblingbear-Riddle said the best prevention includes staying actively involved in their children’s lives, both online and off, and recommends all adolescents 12 and older receive an annual depression screening. She also encourages parents to look for changes in behavior, socialization, school attendance and performance.

“Even if you don’t think your kids are at risk, I think it’s wise to keep open communication lines and bring up issues that they will encounter,” Dr. Stumblingbear-Riddle added. “It is really difficult right now to be a student with the things that are going on in the world and cyberbullying. Parents should always have conversations with their kids about things going on, both positive and negative.”

An individual’s environment, biological makeup and negative psychological coping skills can contribute to mental illness and suicide. Having a family history of mental illness increases the likelihood by three times that a child will develop some form of depression.

“A falling out with a friend, a breakup with a significant other or something to that nature – those are common risk factors,” Dr. Stumblingbear-Riddle said. “A person’s risk level goes up when those happen, especially if social support and other coping skills are low.”

She also said that drugs and alcohol can create even greater hazards.

“We know when someone attempts suicide, usually drugs or alcohol are involved. Not always, but it’s not uncommon for those to be together,” she added.

For those already struggling with depression or suicidal thoughts, adding alcohol or drugs can cloud the mind and make it more likely that the individual will act on those thoughts, Dr. Stumblingbear-Riddle explained.

Her department combats these factors though teaching youth about the importance of staying away from mind-altering substances.
“There are a lot of consequences that come a long with that – health consequences – (as youth) their brains aren’t fully developed, and using drugs and alcohol can negatively impact brain development,” Dr. Stumblingbear-Riddle added.

Many that need assistance never begin therapy because of the stigma that often accompanies reaching out for help. Others may think that because an individual is talking about suicide they are less likely to attempt it, which Dr. Stumblingbear-Riddle said is far from the truth.

“That’s a huge risk factor. If someone is actually saying, ‘Hey, I’ve been having thoughts about killing myself,’ you want to take that seriously,” she added.

An individual doesn’t have to be on the brink of a total mental breakdown to schedule an appointment.

“Even those who may not think their problem is that big can benefit from therapy,” Dr. Stumblingbear-Riddle said. “Sometimes people think that their issue is not a real issue, and so they feel like they shouldn’t come. And sometimes people feel like they should only discuss issues with those immediately involved and family, and think communicating with others signals a sign of weakness.”

Being willing to engage in therapy and talking about hard things is a sign of strength, she added.

She encourages clients to discuss reservations with their therapists. But she did note that once beginning therapy, the fear of uncertainty usually diminishes.
“I hear people say all the time, ‘I wish I would have come in sooner,’” Dr. Stumblingbear-Riddle added, and open discussions about counseling can help others overcome the stigma.

“If you are worried about someone and you feel like they could benefit from services or is suicidal, encourage them to seek help by saying, ‘Hey, have you thought about making an appointment to see a counselor?’ Bringing up assistance in this manner can help others know that reaching out for help is OK,” Dr. Stumblingbear-Riddle said. “Also, if you have had a good experience with therapy, you can share that.”

While reaching out for help through CPN Behavioral Health or another mental health provider is a great step forward, cultural participation can also provide benefits. 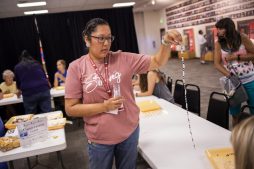 “Culture is so important for our youth,” Wilson said. “Sometimes, our children get lost in the transition of trying to maintain what society bestows on us.”

Wilson added no matter what tribe a person belongs to, everyone is kin.

“If someone doesn’t live near CPN, reach out to the tribes in your area. Because we all have similar histories, similar interests and similar backgrounds,” Wilson continued. “As Natives, we’re not always the most outspoken, but we can and we are here to help each other.”

“Just pick up a class that you’re interested in,” Dr. Stumblingbear-Riddle said. “Whether its learning how to make jewelry like beadwork, learning how to make a shawl, or participating in traditional ceremonies — all of those things helped our people at one point, and it’s really time that we reclaim those and try to help ourselves again.”

Along with Wilson’s MSPI efforts, she regularly hosts and organizes youth-specific cultural events and opportunities. For a complete schedule of courses held at the CHC, visit potawatomi.org/events/.

How to qualify for CPN Behavioral Health

CPN Behavioral Health provides services to CPN members, other federally recognized tribal members, and CPN employees and their dependent(s). To receive assistance, the client must meet one or more of those three qualifications and complete an application.

“We see people throughout the life span, and we have a board-certified psychiatrist, licensed psychologists, licensed alcohol and drug counselors, and licensed professional counselors,” she said. “We work together to help people whether they’re overcoming depression, posttraumatic stress disorder, anxiety disorders, substance use disorders, personality disorders; whatever their needs are, we work with them.”

For a complete list of sessions and available resources, visit cpn.news/bh.

Free 24/7 confidential support is available by calling the National Suicide Prevention Lifeline at 800-273-8255 or via online chat at suicidepreventionlifeline.org.