Census 2020: Why and how to be counted as a Native American 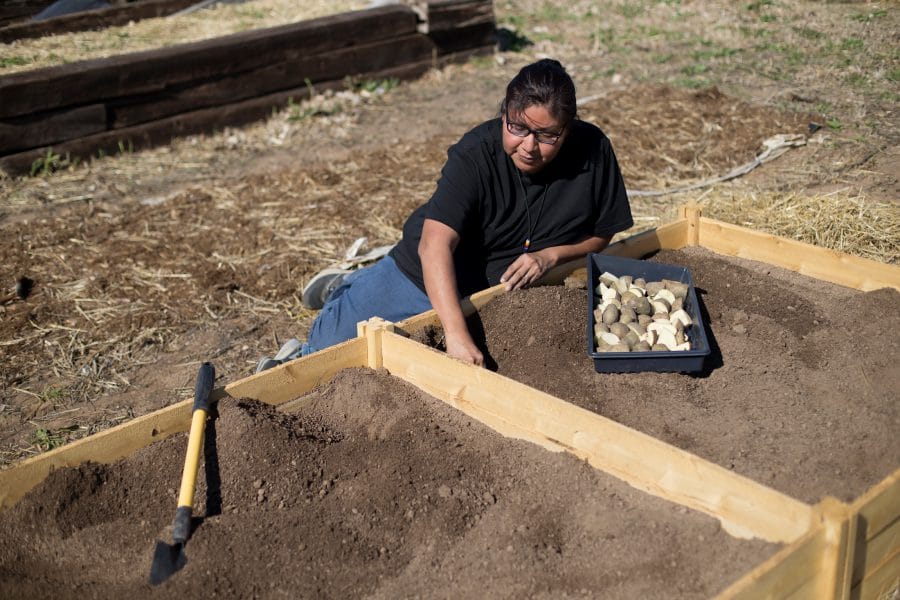 “I knew I wanted to work for a tribal newspaper, and I wanted to learn from Native professors,” Wind explained. She transferred to Haskell where she developed an interest in cultural resources and conservation. After graduation, she returned home to Arizona to work within the Ak-Chin Indian Community’s cultural resource department and as a photojournalist for the Ak-Chin newspaper, Ak-Chin O’odham Runner.

“That story is part of who you are, and you have to continue to share it. If we don’t know it, we will forget who we are and who we were.”

Wind grew up on the Tohono O’odham Nation Indian Reservation located along the U.S. and Mexico border in southern Arizona. She is enrolled in the Ak-Chin Indian Community just south of Phoenix. She met her husband, who is Sac and Fox and Creek, while attending Haskell. His familial connections inspired the couple to move from Arizona to Oklahoma to raise their family.

Since arriving in the state, Wind has held a variety of positions with organizations and other federally recognized tribes in the region. She believes being mindful and empathetic surrounding cultural preservation is integral to the success of all Native Americans.

“There aren’t a lot of Native people in this field,” Wind said. “It is really important because when you get involved with NAGPRA, you’re dealing with cultural artifacts and remains.”

In 1990, congress enacted the Native American Graves Protection and Repatriation Act. Its language describes Native American, tribal and Native Hawaiian’s rights surrounding culturally significant objects including human remains and burial sites. If an organization, whether public or private, receives federal funding, they must adhere to NAGPRA.

CHC Director Dr. Kelli Mosteller serves as CPN’s key NAGPRA officer and oversees all the heritage center’s operations, which includes safeguarding and consulting with the federal government on protecting culturally relevant items, space and bodily remains. She, along with Wind, help determine whether findings and artifacts link to Potawatomi ancestors.

Also, when CPN and other entities that receive federal dollars want to build on current and former tribal lands, tribal historic preservation officers must conduct research on the land’s history and importance before construction can move forward.

“We have to review anything that could be culturally significant, and it could be in Michigan, anywhere that they came along the Trail of Death, and anywhere Potawatomi ancestors settled,” Wind said.

Piles of paperwork line Wind’s desk. She wades through the stacks and conducts research to determine whether projects can move forward or if additional inquiry is necessary.

“It’s just so interesting to me, the process and the fight,” Wind said. “Still, we have to fight — to this day — to get our people back.”

The federal government removed the Citizen Potawatomi from the Great Lakes region, and the Tribe settled in Kansas and eventually Oklahoma. Because of this, the Nation does not encourage bringing remains or items from the Potawatomi ancestral homelands to where the Tribe moved to conduct ceremony and provide proper burials. Instead, CPN assists other Great Lakes tribes and fellow Potawatomi with NAGPRA-related issues, that way remains and objects receive the proper care and attention.

“We’re there for support and to add our name and our weight to it,” Wind said. “It’s really important for tribes to support one another and give that backing because with most (NAGPRA) fights, if it’s just one tribe, they can dismiss it easier,” Wind explained. “But it’s different if you have a whole bunch of tribes uniting together— and that’s what we do.”

Wind assists the Nation with repatriation through NAGPRA and ensures important pieces of Citizen Potawatomi and the greater Nishnabe community are not lost. Her ability to absorb and retain information helps Wind excel, and her tenacity for knowledge ensures CHC staff utilize the latest trends in cultural preservation. In fact, she enjoys reading and learning so much that for the past eight years, Wind has held a part-time position at the Shawnee Public Library.

“It’s really nice, except on the days that it’s really hot. But other times, when it’s nice out, it’s therapeutic,” she explained. “If your mind’s a mess, you can just relax. I love nature, and there is always something new out there. It helps clear your mind.”

One of Wind’s favorite projects at the garden includes CPN’s partnership with Tribal Alliance for Pollinators. Garden and CHC staff are dedicated to habitat renewal and ecological management techniques that support insects like butterflies, bees and other animals that serve key roles in growing the food and fiber necessary to sustain us.

“Tracy helps me by providing suggestions that make the garden and gardening activities more culturally relevant,” DeerInWater said. “It was really her idea to have planting songs and some ceremony before our planting of white corn this year. She is also a really hard worker and is always out in the garden weeding, even on the hottest days.”

Wind is thankful for opportunity to learn about other Native American cultures through her position and her role in uplifting Indian Country as a whole.

“I always know that I’m going to do my best to take care of (the artifacts),” she explained. “It doesn’t have to be just my tribe; we’re all Native. We’re all people, and I’m just happy to be a part of it.”

For more information on the Cultural Heritage Center and its work to preserve Potawatomi culture, visit potawatomiheritage.com and stay up to date on all Bodewadmi Widoktadwen Gtegan activities at potawatomi.org/events.